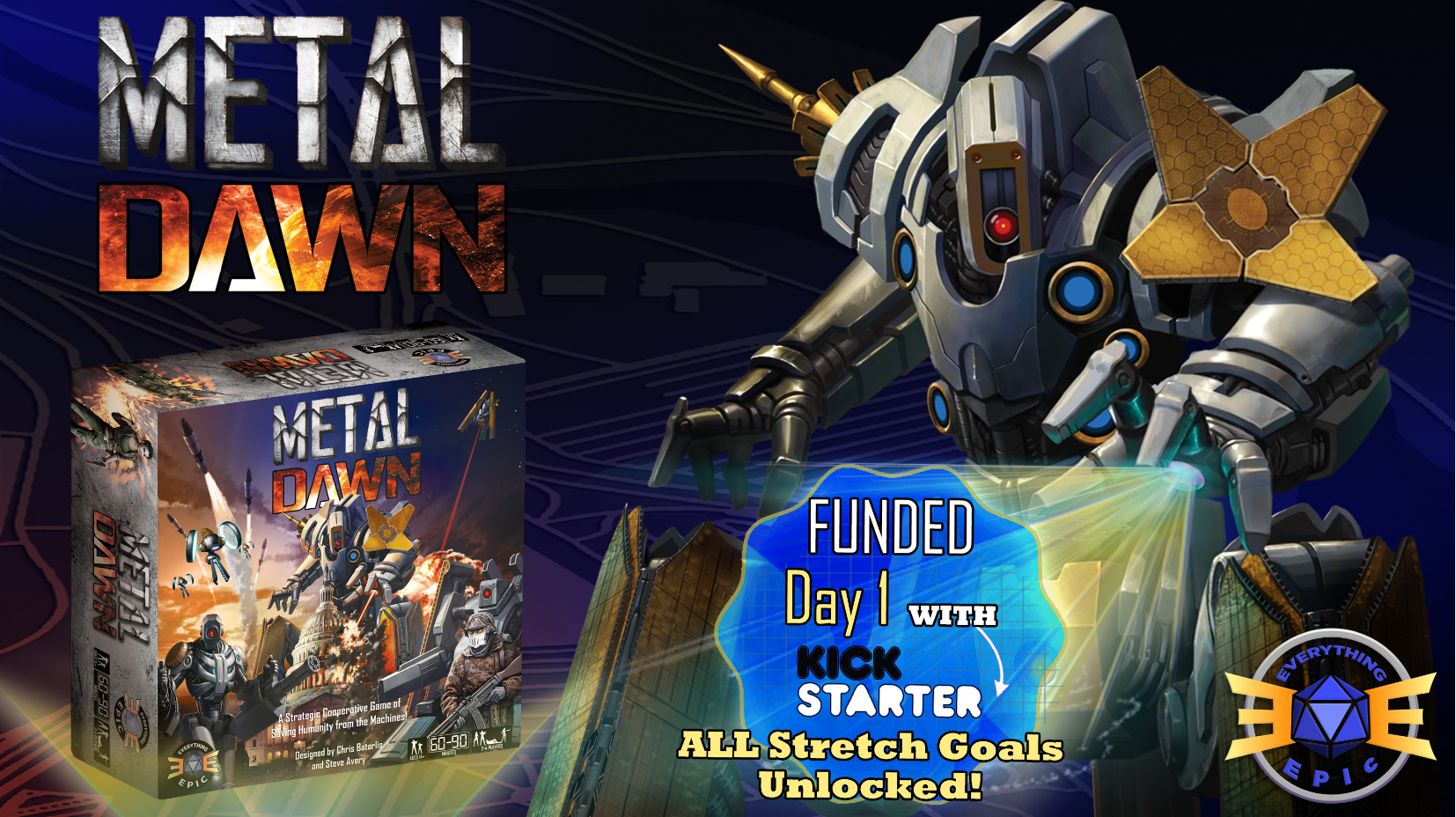 AI has become a huge movement within the programming community.  However, movies like The Terminator warn us about the impending doom caused by our future robotic overlords.  With this premise, Everything Epic is bringing us Metal Dawn.  However, instead of being a battle or area control game, Metal Dawn gives us a cooperative worker-placement experience.  After seeing how unique the game looked on their Kickstarter page, I contacted Everything Epic.  I was able to get co-designer Chris Batarlis to answer eight questions about the project.

What is your experience so far in the gaming industry?

We were inspired by screenwriting and film initially. My business partner Jim Samartino (VP Everything Epic) and I, loved tabletop games, RPGs, video games, and one of our favorite pastimes were movies! We would often talk about making a movie and came up with many different fresh and wild concepts. Eventually, one day, Jim and I decided that we were going to take all of that passion and pour it into the tabletop. So we hatched our first big title series “Secrets of the Lost Tomb” which for us, was a smash hit on Kickstarter in 2014. We funded for that scenario-based tile exploration storytelling adventure of tomb-diving and monster slaying and released over 14 different SKUs for it! With its success, we were able to design our current game Metal Dawn with the help of Steve Avery and me as the main designers. Last Gen Con we signed a brand new designer Danny Lott, publishing his game Coma Ward, a horror hospital-exploration game. Meanwhile, we’ve just launched the pre-order for Big Trouble in Little China the Game with our next upcoming film licensed board game project to be Rambo: the Board Game early 2018. We’ve come a long way in a short amount of time, but we’re just getting started, and it’s getting exciting!

How did the design team between Chris Batarlis and Steve Avery come about?

We started an excellent game design that we had an epic concept for and a base game mechanic scheme, and we needed some back-up to take it to the next level. So we met Steve back at our second Gen Con a couple of years back, and he said he wanted to work with us because our thematic scenes meshed together well. It took a little while, but we finally found the perfect collaboration to work with Steve on. Steve excitedly joined the Metal Dawn team, and he and I worked tirelessly on the mechanics and theme to take an “Action Adventure Thematic Game” and combine it with a “Worker-Placement Tactical Cooperative Game, ” and so Metal Dawn was born.

What are some of the influences behind Metal Dawn?

Metal Dawn was spawned from the great 80’s action adventure and sci-fi movies that we all know and love. Movies like Terminator and T2: Judgement Day, Red Dawn, and TV shows like 24. These films and shows have a feeling of impending doom, like the end of the world in Terminator or the assassination of the president in 24, as well as the need to make meaningful choices to stay alive like in Red Dawn. We wanted to bring that to the game, yet keep it thematic with cool weapons, gadgets/gear, and other great elements to have the players controlling their own characters that they could equip and level up, go on missions with, and destroy a truckload of robots with. We wanted to make the game have that epic saga scope, without all of those hard and difficult rules. That’s where the mechanics come in to save the day. Everything flows perfectly and the theme drives it home. Dominus (the main villain) brings the mocking tone and terror clock death timer of the artificial Intelligence from the old 90’s electronic board game “Omega Virus” (one of my favorites, I still own a copy). It’s fast-paced and action-packed just like all of the Saturday morning cartoons I used to watch and still love from my childhood.

Why create this as a cooperative game instead of a team vs team game?

The feeling players get of teaming up against unspeakable odds is always an amazing feeling. I feel like games are made to bring people together. Certainly Monopoly has it’s competitive game place, and so do plenty of other games, but Metal Dawn just felt right for the players to be on the same team to destroy the horde of oncoming bots. It’s a challenging game, which makes it engaging. Being able to plan together and work together feels right in this game. However, the game was also perfect for a competitive mode of play. So, we pushed forward to create an Area Control game with many of the core mechanics and mechanisms in the game and called it Metal Dawn: Tech War. “When Dominus fell, the factions rose!” all of the different governments and organizations rose up to grab hold of the technology left behind after Dominus and gain control of the powerful zones of influence in Washington DC, thus controlling the world.

How does the worker placement portion of the game work?

Of course, it’s not traditional worker placement. It’s more of an action-based system. You place your Agents on an open (unoccupied by an enemy or another player) space and then you’re able to take the action there to gain resources (weapons/gear/intel) or do another special action, like snipe a revealed bot or reveal all of the defense levels of the bots in a zone. There’s so much you can do and so many different paths to victory (or defeat) in the game!

Simply put: each agent gets two actions. Each action can move you to any open space on any zone on the board, which could allow you to trigger space actions or even zone location actions! They can also get you in range to do destroy bots or block bots from hitting the zone for damage. And most importantly, to eventually hack Dominus, transforming him into EPIC ROBOT form bringing him down to earth, to fight him on the ground to win the game!

How do you increase the challenge of the game for seasoned players?

The game is indeed quite challenging “as is” and most likely will not need to add additional challenge ;). But, we’ve thought of that and added in some great scaling options! The different modes can easily change how many Dominus Intel Codes must be hacked in order to bring him down to Earth and also you can be forced to draw more Dominus cards to spawn more minions! This makes the game much harder and is easily scaled up or down depending on how hard you want the game to be.

Will the competitive Tech War mode only be available through Kickstarter?

For now, Tech War will only be available on Kickstarter. Depending upon demand, we may decide to create a special Tech War expansion for Metal Dawn in the future for retail. But for now, the plan is just for the Deluxe edition of the game.

Can we expect to see expansions with more roles and weapons?

The current Kickstarter deluxe edition comes with 16 characters, over 40 unique weapons and 40 gadgets, tons of missions, intel cards, and loads of unique zones. Nothing is doubled in the game, which adds to the replayability and replay value of the game. However, we do plan to make more expansions for the game including new locations, like going on a Space Station to fight Dominus in space for instance!

Metal Dawn looks great, and I’m looking forward to seeing how it plays.  It is funded on Kickstarter, so there’s no risk in supporting it.