One of the most popular games that came out for the Nintendo Entertainment System was Contra.  For those who know the Konami Code, it’s the game that they probably learned it from, and you definitely needed to put in the code to get all those extra lives to complete the game.  Recently, board games have been based on video games like Resident Evil 2, Dark Souls, Doom, and more.  Now, Blacklist Games is taking the run and gun action of Contra and making it into a board game.  I was fortunate enough to interview Brady Sadler about Contra: The Board Game.

What was the biggest challenge to create the Contra experience in a board game?

When it comes to adapting other mediums to the tabletop, my main focus is designing for the strength of the tabletop while highlighting the strength of the content being adapted. For Contra specifically, I certainly didn’t want to try to recreate the feeling of what you’re doing as a player when playing the Contra video games—hitting buttons in a timely response to the frantic action on the screed. Rather, I wanted to capture the desperate balancing act between offensive and defensive maneuvers, without relying on dexterous finger skills at the tabletop. I’m very happy with the end result, as the advantage system in Contra: The Board Game simulates the difficult split-second decisions you have to make in the video game—”Do I shoot, or jump?!”—in a more table-friendly method, in this case resource management, hand management, and dice mitigation.

Your previous games Street Masters and Brook City give each player a deck of cards for abilities. Did you plan to use something similar at the start of development?

Yes, we were encouraged early on during the licensing partnership to utilize our well-received “Modular Deck System,” which is our umbrella name for our games that feature fixed, modular decks that can be mixed and matched to create your own preferred gameplay experience. 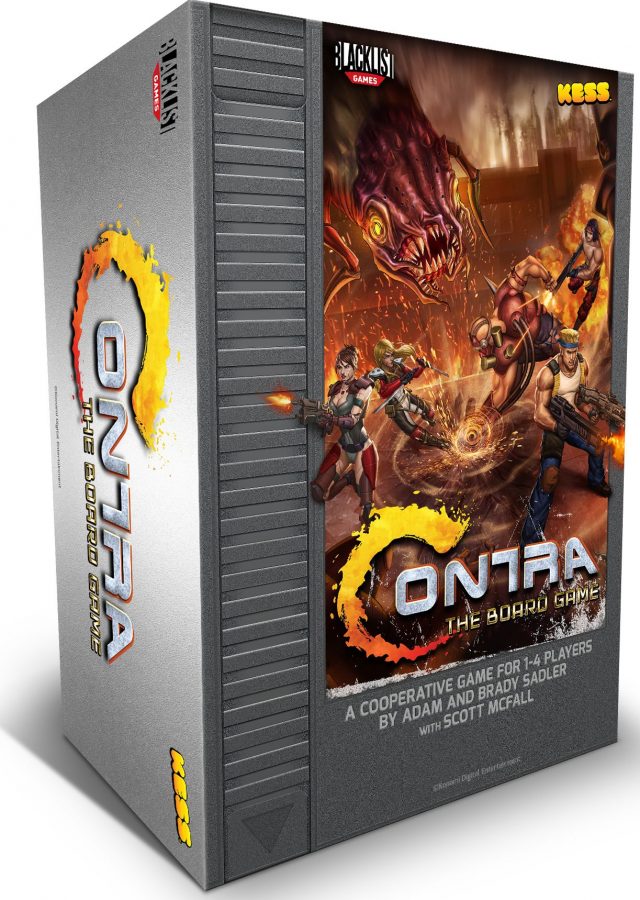 How do you simulate the stages of the game?

When Adam and I were younger, we spent countless hours trying to navigate those treacherous early stages in Contra, most notably the dreaded Waterfall stage! We took our experiences with those levels to ensure that the board game levels made you feel the same struggle against the environments.

Are there stages only reminiscent of the side scrolling stages or will we see the interior stages as well?

Early on we tinkered with ways to incorporate the interior stages, but it split focus too much from the core experience we wanted to create. These segments worked well in the video game, because they offered a different perspective, but in actual physical play it is a much more procedural effort that would have eaten into the core content we could offer in the base at this value.

But there’s always the possibility to explore stuff like this in expansions… :)

It is ironic that you are using exploding dice for Contra. What do the different advantages do for your character?

Exploding dice were certainly a must :) So the three types of advantage are different resources you have to balance (as mentioned earlier). Each type can either convert a matching advantage dice result to a success on an attack, or can be spent in response to a matching enemy attack to prevent suffering damage (either returning suppressing fire with accuracy, dodging with mobility, or avoiding by laying down in cover with subtlety).

Is the Spread weapon the most powerful weapon in the game?

It’s certainly good :) But we tried to avoid making anything “the best,” because that obviously opens up more replayability and strategic choices…as well as drama when drawing a weapon card, hoping to get the one you want at that time.

Why are you taking preorders for Contra: The Board Game instead of using Kickstarter?

This is strictly a licensing aspect—but it is also a great vehicle for Blacklist Games to start working with distribution partners and mass market opportunities.

Will entering in the Konami Code give you extra lives?

We’ll have to see… 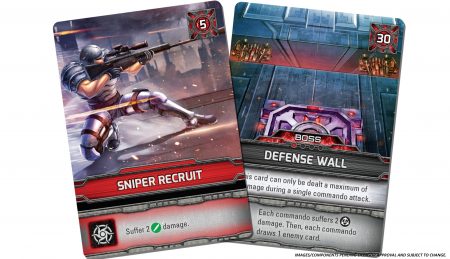 It sounds like Brady has a great handle on what makes Contra great.  What’s more interesting is that they aren’t using Kickstarter to fund their game like they have with their previous projects.  You can go to their website and pre-order it on this page.  You can also find out more about the game on their Contra: The Board Game page.  I’m excited to see how they bring the action of Contra to the tabletop, and it should be easy to find gamers interested in the theme to try it out.