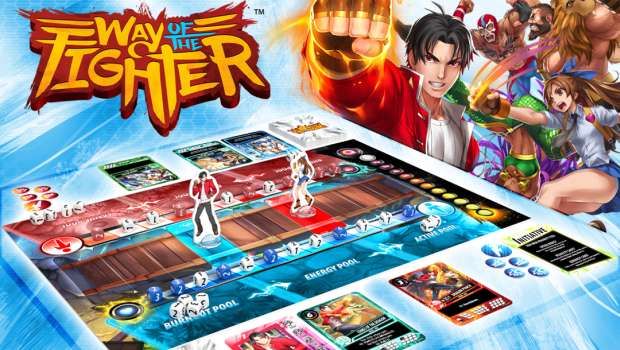 While the fighting genre has a bit of a resurgence since Street Fighter IV was released, board games haven’t had many games that simulate this action.  While there’s Yomi and BattleCon, the battle between two individuals hasn’t been put on the tabletop often.  When I heard about Way of the Fighter coming to Kickstarter, I needed to find out more to see how it would play in this underserved genre.  I asked designer Benjamin Yamada eight questions to get the nitty gritty.

What is your gaming background?

I am an omni-gamer. I started young with Japanese video games, then was enamored with Warhammer and 40k in my early teens, became a role-player in my late teens, and then a board gamer in my early twenties. Since then I still go back and forth between all these hobbies, alternating with video gaming, Warma/Hordes, and bookshelves full of RPG and board games.

Are there a lot of board game players who work at Blizzard?

As one would expect, there are plenty of card, miniature, and board gamers at Blizzard. We embrace our inner geek so this not only common, but promoted.

Why design your own tabletop fighting game?

I always have lot of design ideas, and a good half of them are inspired by video games, especially the those from the 90’s. I had made a fighting mechanic for a role-playing game design, but I found that it was not really a good fit for an RPG. So I decided to refactor it for a tabletop game. I needed a strong theme to get my creative juices flowing; being a big fan of Street Fighter 2, I used fighting games as my inspiration and went for it. At that point, I gave a hard look at Yomi and Battlecon, (both excellent games), but I found them to be quite abstract. I wanted to provide an experience closer to the real thing, in particular in regards to the spacial element of fighting games. Creating such a game and keeping it streamlined and quick to play was an exciting challenge.

How does Way of the Fighter play?

Not going in to much detail here; the KS will describe it better than I could, but here is what I was trying to achieve:

Why use dice and cards together?

Both mechanics allowed me to incorporate the different aspects that I wanted for the game. The dice provide excitement with an element of risk management and are also the main resource for the player to manage. The cards and the way they are played bring in the tactical decision making and add a lot of flavor to each fighter.

How are the characters differentiated from one another?

Each fighter has their own cards that define their core moves and special attacks, then they can choose cards based on their styles: Hard, Soft, Fluid, Wrestle, and Chi. Most fighters will have two styles and each style provides a combat archetype. For example: Hard is slow but powerful, Fluid is all about movement, Chi is about fireballs and special effects. Each fighter will come with a default deck, making it easier for players who are not into customizing their fighter, but more hardcore players can change cards within a style to change a fighter’s play style and take their opponent off guard. Fighting game enthusiasts will easily find the inspiration for many of the fighters, but many are a blend of different archetypes or even quite unique, relying on mechanics impossible in video games.

How difficult is it to come up with original characters for a fighting game?

It was pretty easy for the first half of them, and it got harder and harder. Fortunately, I was careful to create some design space from the beginning to allow for a lot of options and variety. Some fighters take inspiration from fighting games in their design (rushing, zoning, etc…), while others rely more on tabletop/card game design principles (card combo, dice manipulation, etc…). While designing the fighters, I tried to make sure they had something unique that made them fun, interesting, and powerful.

What are some of your favorite fighting games that you might have gathered inspiration from?

Super Street Fighter 2 and Fatal Fury are my go-to fighting games (I think I just showed my age).

If you’re a fan of the fighting genre, be sure to be on the lookout for Way of the Fighter on Kickstarter now!