Coming up with something new was hard.  Many third person video games now implement a cover mechanic.  The Marvel Cinematic Universe seems to climax with some object falling from the sky.  It seems like the most innovative song in several years was one that combined rap and country music.  A TV show with “Law and Order” in the title has been broadcast since 1990.  While there’s been a previous version, Horrible Guild is publishing a new version of Dungeon Fighter with a little help from their Kickstarter campaign.  This feels like a unique approach to a dungeon crawler, so to find out more I asked Alessandro Pra eight questions.

Dungeon Fighter is a cooperative dexterity game for 1-6 players where players throw dice at a target in whimsical ways to defeat monsters in a deadly dungeon. Players take the roles of fantasy heroes (Barbarians, Wizards, Elfs, Dwarves, Clerics, and so on) and they will have to fight their way through the dungeon, fighting a monster in each room, until they reach the deepest room where they will find the Boss of the dungeon waiting for them. Their goal is to defeat the Boss… or perish. It seems the story for a dark, serious game, but it is actually all very light-hearted and fun… also because of the silly things players will be forced to do while they play!

How do you play Dungeon Fighter?

Each round the Leader player will choose a Dungeon Room, where the party will have to fight an unexpected Monster. Then, players must throw dice at the target and hit its high-value spots to deal as much damage as possible to the monsters encountered at each fight. Dungeon cards and Monster cards might both present you with extravagant dice throwing challenges… you might have to close your eyes when facing Medusa, or throw the die while jumping if the floor of the room is on fire. And you might even have to do both at the same time! There are many other extravagant throwing challenges, like throwing the dice from under your leg, from your elbow, while spinning, and so on).

You have four different versions of Dungeon Fighter for the Kickstarter.  Are the four versions the same with different art, or are there fundamental differences?

Actually, each box is completely different from the others! Dungeon Fighter comes in 4 standalone boxes, each one representing a different dungeon: the Labyrinth of Sinister Storms, the Chambers of Malevolent Magma, the Catacombs of Gloomy Ghosts, and the Castle of Frightening Frosts. Each Dungeon comes with a different target board, a different set of dice (d6, d8, d12, even d4 dice), and then of course different special dice, extravagant throwing challenges, Dungeon cards, Heroes, Monsters, Bosses, Weapons, Armor, and Items.

Can the pieces in all versions of Dungeon Fighter be used interchangeably to create a large dungeon?

It’s more about increasing the variability. Each box can be played by itself and represents a complete experience, but if you own more than one you can combine them to create your custom dungeon, greatly increasing the replayability of the game. You can choose a target and a set of basic Hero dice (even from different boxes, if you like). You can also freely pick your favorite heroes to form your party, and then you can shuffle the rest of the components (Monsters, Dungeon cards, Items) all together or pick your favorites and create your custom dungeon. 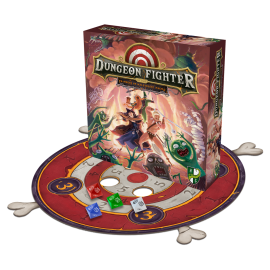 What’s the difference between this version and the original version that would cause someone to want to get this version?

The original Dungeon Fighter was one of the first games that we designed (the second one, to be precise). We still love the concept to bits, but while looking back to it a few years down the line, with the experience we gathered over time, some of the rules started to feel a bit clunky. “If we did it now,” we thought, “we would keep the hilarious core mechanisms, but we would also do many things differently. We know the rules could be simpler. More streamlined. More modern.” So, that’s exactly what we did! We removed the pre-fixed maps in favor of a more variable “Dungeon cards” approach, we changed the way you can obtain extra white dice with the Last Strike Rewards mechanism, and we added the ability for heroes to level up during the game, which is pretty neat.

How do you level up your hero in these new versions of Dungeon Fighter?

A frustration that some of the players of the classic Dungeon Fighter had with the game was that sometimes you didn’t need to use a special ability even if you rolled a Power symbol with your throw, and that felt like a wasted opportunity. We tried to fix that with the “XP” mechanism in the following expansions, but now we decided to fix it for good, right in the core set of rules… this is why we introduced leveling up heroes. Now, whenever you roll a Power symbol with a throw, you can either choose to “Activate” OR to “Level Up” one of your Hero’s special abilities. The game dice now have different “tiers” of power-activating symbols, and at the beginning of the game heroes only activate their power with the lowest-tiered symbol. Leveling up an ability increases the kinds of symbols that can activate it, thus increasing the chances of activating that special ability for the remainder of the game. 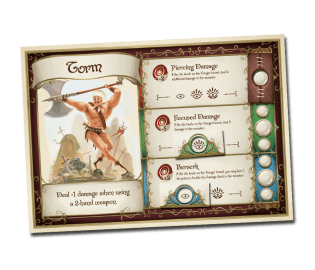 Do you think that you might have expansions in the future for Dungeon Fighter?

In a way, we already did… the four new versions of Dungeon Fighter contain a mixture of gameplay mechanisms from the old core game, the old expansions, as well as entirely new mechanisms. We are trying to move away from the classic core game + expansions model in favor of a “all games are standalone expansions” approach. Now you can choose one of the boxes because you like it the most, you are not forced to get that one “core game” just to try the contents from a specific expansion that you really like. One box is enough to start, and each box feels different from the others!

Is there anything you want everyone to know about Dungeon Fighter that we haven’t covered yet?

Well, apart from the obvious link to our Kickstarter campaign, we’re pretty excited for our stretch goal plans. With our latest campaigns we’ve been progressively moving away from the classic stretch goals tied to the amount of funding reached thanks to the backers, and for Dungeon Fighter we have (mostly) daily unlocks tied to a small story called “The Dungeon”: each day the players will be asked to turn left or right to reach the next level of the dungeon (and vote in the comments to express their preference). The winning choice also determines which stretch goal will be unlocked the next day! We have plenty of surprises in store for this “stretch goal adventure”, and we hope our backers will like what’s coming too.

I hope that other companies take a similar approach to stretch goals, as this seems like a great way to get the community involved during the entire campaign.  They successfully funded the Kickstarter campaign in a couple of days, so now is a great time to support them.  You can choose how many versions of Dungeon Fighter you want as well as which versions you want sent to you.  It definitely seems like a more approachable game than something like Descent or Gloomhaven, with a much shorter play time, so be sure to check it out.