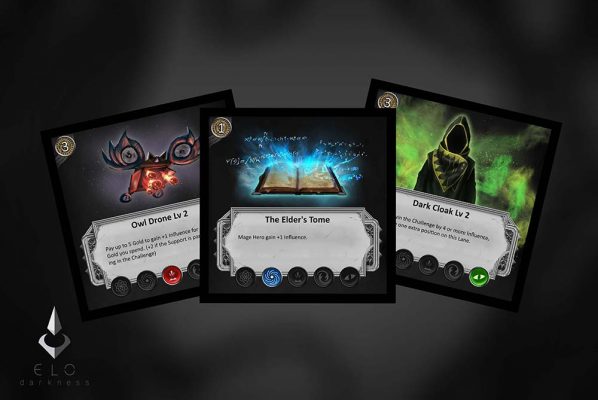 The MOBA genre took off with the introduction of League of Legends.  Since then other games have come out on the PC to capitalize on its popularity.  A few board games have tried to emulate the MOBA formula.  ELO Darkness is a new game on Kickstarter that aims to bring the genre to the tabletop.  I asked the designers Alberto Parisi and Tommaso Mondadori eight questions to find out more about this game.

Do you have any previous experience in the gaming industry?

Alberto: We are new to the gaming industry. ELO Darkness is our first board game project, presented by Reggie Games, a Reggie srls department. Reggie started as a company active in the software and mobile development sector in 2015, but we opened a Game department for the design and development of ELO Darkness and its Kickstarter campaign management.

So which MOBAs are you fans of?

Alberto: I’m the team passionate video-gamer and I play MOBAs since the first DOTA. I played DOTA 2, Heroes of the Storm, Heroes of Newerth and League of Legends. The last one is the one I had the most experience with because my circle of friends focused on the title.

The board with the three lanes.

Why did you try to create a MOBA as a board game?

Tommaso: The MOBA style, with its engaging and complex team dynamics, always looked perfect to us for a board game design. Alberto and I, the lead designers, have always been a demanding type of gamers. Each time we play a game, we feel the urge to completely explore its mechanics. We played the few MOBA inspired tabletop games that are on the market, but they didn’t really give us the experience we were looking for. Of course, it’s a matter of taste and the main reason is the dice-based combat system. We desired something with a more strategic feeling, rather than a tactical one. We designed ELO Darkness to create such a new tabletop perspective on the MOBA genre.

How do you feel that ELO Darkness recreates the MOBA experience?

Tommaso: The first thing to mention is the one you see at first sight: the 3-Lane map. The gameboard has been designed to directly emphasize the MOBA theme. Apart from that, going deeper into the game mechanics, we focused on many aspects that we strongly believe can be a good synthesis of the MOBA experience. Some of them are: fast pace, combat “trade”, gold farming, the step by step approach to the enemy base and the complex interaction between Heroes.

In ELO Darkness you constantly have to find a balance between the cards you play and the ones you decide to keep. At the end of each Challenge on a Lane, cards get discarded and the winner advances by 1 step on the Lane. This really gives the feeling that each single fight is a trade with the opponent.

In addition, another important feature that recreates the “MOBA feeling”, is the Roaming mechanic. During the Backing phase, a player can lose a position on a Lane in order to attach the “Gank” trait to the associated “Laner” Hero (each Lane has an associated Laner character). A Gank card can be played to trigger combos and increase the Influence value during combat. This way a player has to make a strategic choice in order to focus on a specific Lane.

Finally, another thing we really took care of during the design of the game, was the intense late game feeling that losing a fight can completely turn the game around. This aspect has been made possible by the fact that towers get destroyed and permanently removed from the board making the distances on the map shorter. Players feel the challenge until the last fight.

Items to enhance your heroes.

Heroes progress down three lanes, but each deck has cards for five heroes. Why not use only three heroes for each game?

Alberto: During the match, we want the players to focus on their Team management. A 5 Heroes Team, apart from the direct analogy with the main MOBA videogames, means that players can count on five different characters which together can create powerful combos, providing depth, variety and also replayability to the title.

Moreover, one important feature of the game is the difference between the “Laner” and the “Gank” Hero traits. 3 Heroes (Fighters, Mages and Marksmen) are Laners, and they are associated with a specific Lane. Junglers and Supports are Gankers, which can reinforce any Lane during combat: their presence is a structural feature of the game mechanics. The Challenge, during the Combat phase, is entirely dedicated to the Gank Heroes.

Are there synergies between the heroes, or do the heroes mostly act separately?

Tommaso: Yes, absolutely. The synergies between the heroes are one of the main focuses of the game. Players have to build combos and explore interactions among the ability cards.

During combat, they can activate the Hero Chains (combining different ability cards of the same Hero) or generate combos among different Hero classes.

The ability cards have been designed to create deep links between the different Heroes (as you may expect, “Marksman” Heroes, for example, are strictly connected with the Support ones, creating powerful combinations when played together). By changing even one Hero, the deck synergies and the interaction between the cards can drastically change: building your own Team, especially through the initial draft mode, is really an important part of the game experience.

The hero abilities are represented by the cards.

Why is the main objective to have one character reach the end of a path instead of using a number of kills or influence?

Alberto: As in MOBAs, you win reaching the opponent’s base. In ELO, the Influence value and the Kill system are means by which players can advance on the Lanes and win each fight.

We think that the fact that you have to reach a specific point on the map, instead of accumulating victory points or reducing the opponent’s life to zero, is something that feels both more thematic and different than usual (for a card-driven duel like this).

If the Kickstarter is successful, will you look at expansions that include cards for new heroes, classes, and items?

Tommaso: Yes, we really want to expand the game in the future. The Monsterkill Expansion is already available on Kickstarter. It includes new Heroes focusing on the Threat&Kill mechanic, new Action cards to enhance deck building possibilities and new Items to equip your Team.

Moreover, with the Monsterkill Expansion we introduce 2 new gameplay features as well: the Boss cards, to expand the mechanic of the Dragon Objective, and the Elder Spells, powers to be used only once during the game.

We are not going to follow the LCG-style (too expensive for the player side), but we look forward to adding new expansion sets.

However, for now, we are concentrating on our Kickstarter community as well as the current base game production.

If you think that this sounds like a MOBA for your tabletop, or if you’re just looking for something unique, be sure to check out the ELO Darkness Kickstarter available now.