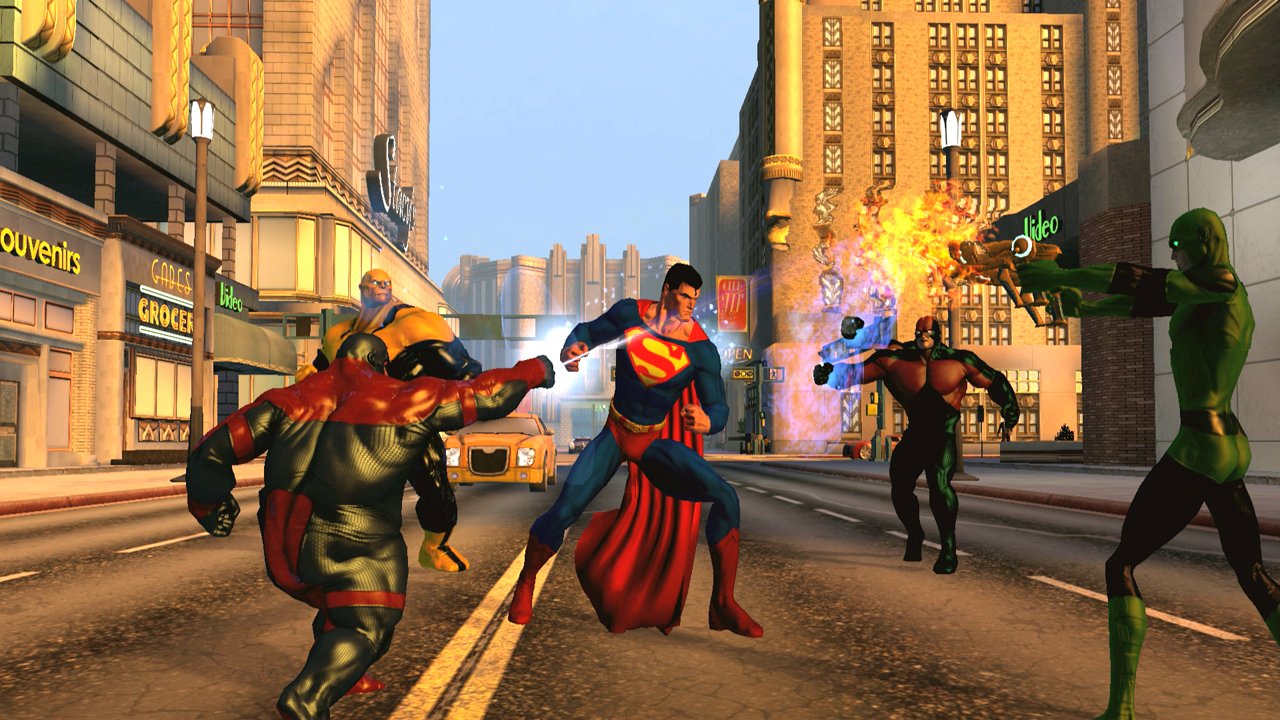 Batman is always a convention favorite, and the Caped Crusader took center stage this year at the grand opening of the Comic-Con Museum at San Diego Comic-Con. We met up with SJ Mueller, the Creative Director of DC Universe Online to talk about the DC Universe Online’s upcoming leap to the Switch, The Batman who Laughs, and who helps her rock her superhero-esque hairstyle.

Gaming Trend: DC Universe Online has been very popular for quite a while, but it’s about to become portable! It’s coming to the Switch, right?

SJ Mueller: And we have a date! We have announced that it’s August 6th, so it’s right around the corner. And in fact, during [San Diego] Comic-Con, at the Comic-Con Museum, it’s demoing on Switch. It’s on a server, just like it would be, it’s on a TV so everyone can see it, but you can see the Switch, it’s docked, and the four people play together just like you would in our game. This may not be useful information after the event, but it was demoed and all sorts of cool stuff was happening there.

I don’t know if we can say names… (Aside) Can I say who played at the event last night? Yes? David Mazouz, Bruce Wayne from Gotham demoed our game last night! It was really cool, he had a good time, and it’s Batman themed, so having Batman play our Batman game was really fun. It kind of was a convergence of wonderfulness. 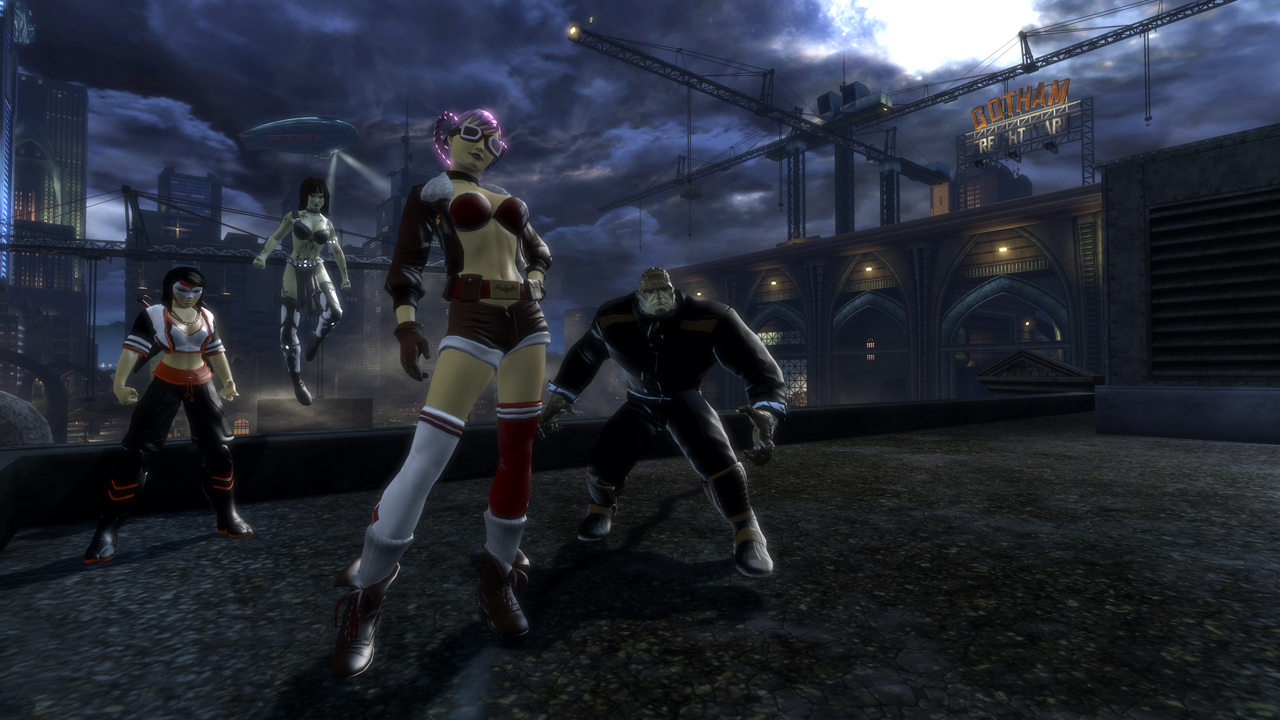 GT: What were the challenges of converting an online game of this scale to the Switch console?

SJ: Well not a lot have done it yet, there’s just a few titles that are even remotely as like… online with that massive type of gameplay that we have. So a lot of it was… we were paving the way. Honestly, I’ve heard that other groups and companies were looking to see what happens, because if we can do it, they can do it. And I think that’s great for the entire Switch community, because I think it’s an entire… For one, a generation of users who don’t even know what MMOs are, and the playerbase, Nintendo people, haven’t really had a whole lot of experience with MMOs either, so I think it’s just incredibly exciting there. And just, frankly, getting that kind of tremendous world to work on the Switch was quite a technical challenge, but we have an incredible team that we–we were originally just PS3 and PC, then we went to PS4, then we went to Xbox, so we kind of have become old pros at this.

GT: Was your team bold enough to mess with motion controls or Joy-con rumble for this port?

SJ: Actually, it’s very important to us that we have the same experience on everything. Now, there is rumble, because there is rumble on all platforms, so we did port all of those types of things over, but it’s always been a core goal for us, it’s really important to our executive producer, Leah Bowers, it is the same experience for everyone. It’s fair, and also if we’re gonna do something really cool, we wanna do it for the entire community!

GT: So again, it’s one player per console, you can’t hand off a Joy-con and split screen or partner up with a friend?

SJ: That’s right, it’s an online thing. What’s really interesting is that the game–a lot of times people will be like, “Yeah we used to bring all of our computers to our friends house and try to play together,” and now you’ve just gotta bring your Switch. It’s so easy! We just did that at E3, we demoed the game, and we were in a hotel room on a hotel wifi and it worked perfectly. We actually had different reporters from different groups all playing together, and I was like “Awww, it’s working!”

GT: Given what you said earlier, about how there’s a whole group of Switch players who have probably never played an MMO, what’s your favorite feature that people might not know about?

SJ: I think the player customization side of it. The fact that you can pick your gender, you can pick your size, your skin color, your hair color, your style, your costume, and you can be a hero or a villain that is literally part of the DC Universe. You immediately get mentored by Batman or Joker, and it’s up to you who is your mentor, out of the “Big Six Characters,” as we call them, and I just don’t think they’re prepared for something like that. I think it’s gonna blow ‘em away. 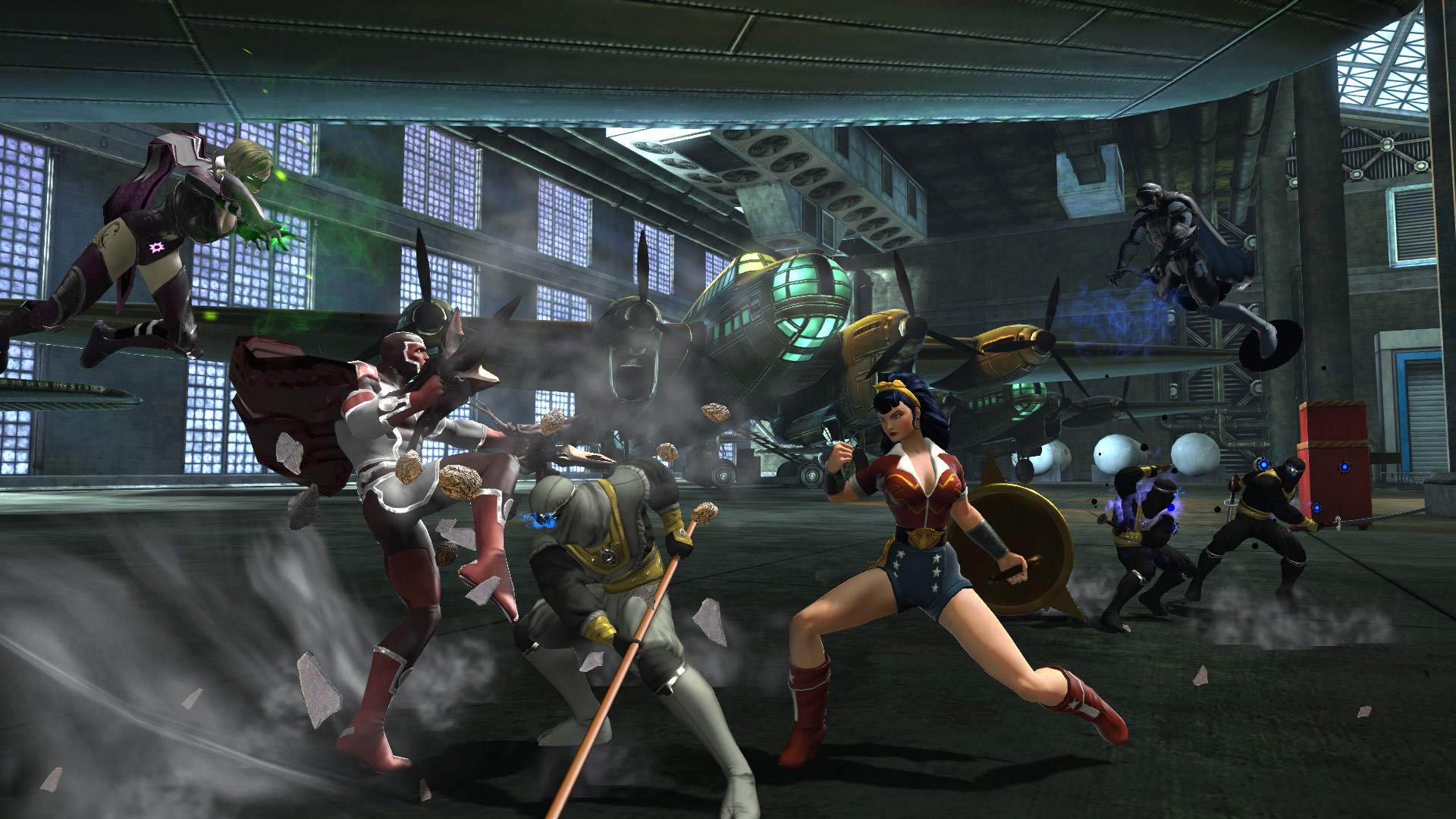 GT: What was your biggest challenge in making sure everything you really love about the game made it to Switch?

SJ: Well, the tech was the most important part of it all… buuuut! While the engineering team was working on that, the design and the art team actually decided “We should do some things to… for one, bring it up to date.” The game has been out for eight years, so it’s… costume changes have happened in the comics, and in the movies and stuff like that, and so we wanted to modernize. So a lot of our characters got updated, like Batman, Superman, Wonder Woman, Joker, Lex, more than I can even name off, have all gotten new models in game, so not only do they look better res-wise, but they also look more like… If you close your eyes and imagine Wonder Woman, you imagine that Greek armor now that they wear in the films and in the comics where ours was old school. And we’re like “Eeeeeeh, let’s bring them up to date.”

So we went through and did a lot of that, we polished a lot of the visuals of like, Atlantis. It’s this huge underwater city that we had to like, make work for one, and so we went in and optimized and improved everywhere we could. We also changed our onboarding tutorial instance to be more iconic, because part of it was like… this is a new generation of people, and I wanted to make sure that the minute they get into [the] game it’s a very powerful experience. Where it used to be that you’d fight your way and eventually get to see Superman at the end of the onboarding, I was like nah. Superman’s gonna be there at your side from the beginning.

GT: Is there a character that is not currently in the game that you’d love to see join the cast?

SJ: That’s really hard to say because we have 300 iconic DC characters, but I would really–and I almost got her in before–I would really like to get Stargirl in. She’s gonna have her own show soon on the DC Universe, so it might be time, but I make no promises. I would love to have Stargirl in.

SJ: That is… ok. I officially have no favorite, but I am very fond of Barbra Gordon Batgirl, and Batwoman. They are… they are really hard–I can’t pick, but I love ‘em both.

GT: Is there something you’ve been hoping someone will ask you that no one has yet?

SJ: You… you broke me. Hold on. No one ever actually asks me who does my hair, but they always love the hair and comment about the hair!

GT: Who does your hair?

SJ: Her name is Don Diez, and she is a stylist in Austin, Texas.

GT: It is awesome hair, it’s kind of got a superhero vibe to it.

SJ: They begged for it in game for years, they kind of got it with one of the Amazon hairstyles, but anyhow! There you go. 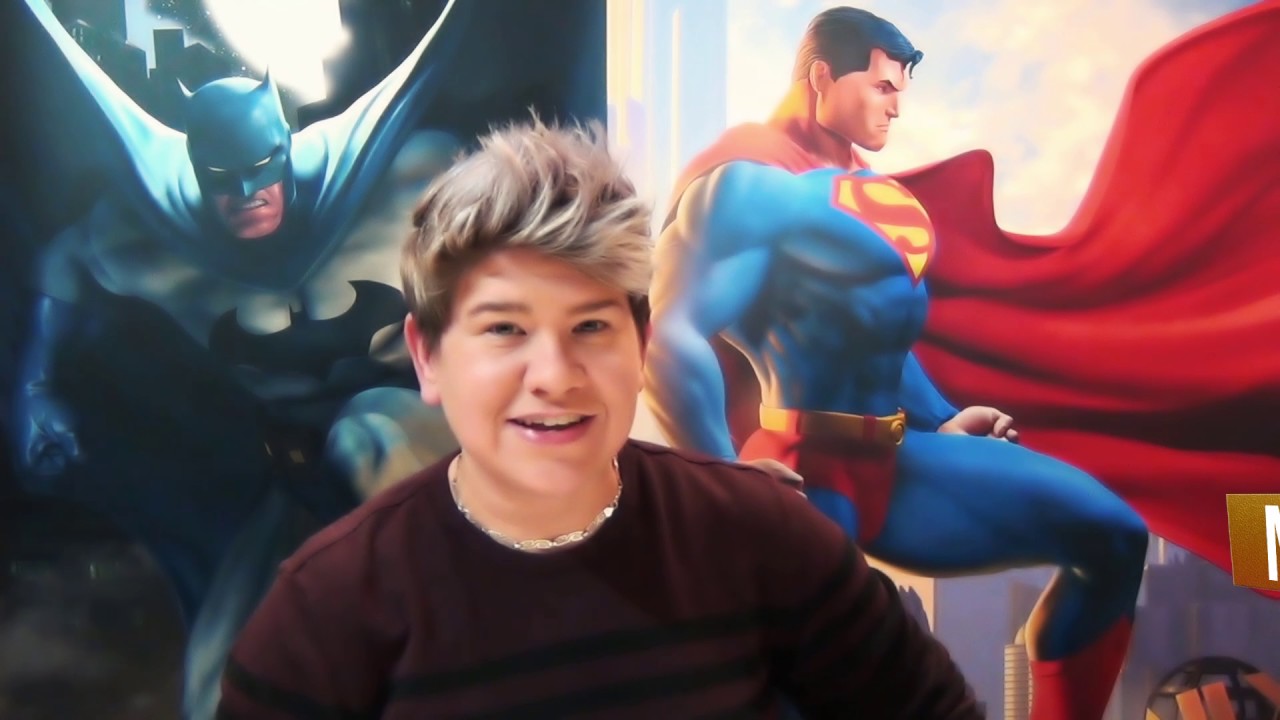 GT: What merch for DC Universe do you wish existed?

SJ: Any. We don’t really have any merchandise because of IP stuff. Like, I posted this shirt online and everyone’s like, “Where do I buy it? Where do I buy it?” And I’m like… you don’t. Sorry. It’s mine.

I wish I had all of the statues! We did have a line of statues when we launched the game, and I actually have none of them, and it makes me sad. But they’re like, $700 now on Ebay, so… not gonna happen!

GT: So now you just need to get the rights to do V2 for the Switch launch.

SJ: Don’t even get me started about Amiibos! I guess that would be it. An Amiibo. Which we don’t have, but I wish we did. That’d be awesome.

GT: Any big, new announcements you want to share with our readers?

SJ: Tomorrow we are going to announce our new episode, it’s DC Metal, based off the new Metal storyline in the comics from about last year… Greg Capullo, Scott Snyder, with The Batman who Laughs. We’ve seen his terrifying face around this booth already. People look at it and cringe, but we’re gonna announce that we’re gonna do a two part series, and part one’s gonna come out in September, and part two is going to come out in December. It’s pretty much just our DC Universe love letter to that crazy, wild… if you haven’t read it, I really recommend it, it is just the weirdest, insane… it’s a Batman story, but it crosses the entire… has many tie-in books, and we’re gonna do the best we can in two episodes!

GT: How much gameplay do you expect this to add?

SJ: Hundreds of hours, probably. All unique stuff, easily dozens of hours, but of course we have a lot of replayability where you can go back and keep playing the stuff you really like, and earn rewards and things. It’s a substantial update with new maps, new characters, and new costumes, and everything.

GT: Can you name-drop any of those new characters for us?

SJ: Well… the big guy… he’s gonna be on our picture. The Batman Who Laughs is the big, badie, so… I think he’s one of the scariest things you can imagine, because it’s Bruce Wayne as the Joker, so it’s like… He’s as demented as the Joker, but he’s strong and as smart as Bruce Wayne. You’re not gonna win, it’s an unbeatable thing. I can’t wait to see the players try. …Okay, they might win a little bit, but…

Thank you so much to SJ for taking time out of her busy schedule to talk us through the DC Universe Online as it makes its leap onto the Switch. The August 6th release date is fast approaching, will you be ready to take on The Batman Who Laughs?