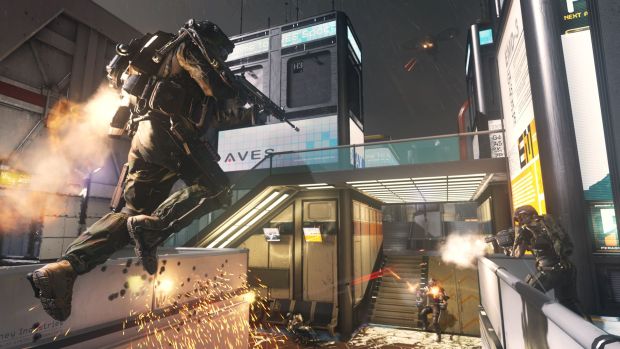 We kicked off the multiplayer reveal of Call of Duty: Advanced Warfare with an impressive presentation from the team at Sledgehammer Games showcasing all of the changes they’ve made to the most popular shooter in the entire world.  They’ve run the tagline “Power.  Changes.  Everything.” in pretty much every trailer we’ve seen, but let me assure you that, after four hours of multiplayer against some of the best Call of Duty players in the world, the Exo Suit changes everything.

Michael Condrey and Glen Schofield, the Co-founders of Sledgehammer Games took the stage to give us the first look at Call of Duty Advanced Warfare’s groundbreaking multiplayer.  A worldwide reveal should go live just shortly after you read this, but we were given the chance to try out everything you are about to see for ourselves.  After three years of production time, the team at Sledgehammer wanted to make fundamental and meaningful changes to the root structure of the Call of Duty franchise.  Setting their game in the future enabled the team to embrace forward-looking technology like jetpacks and Exo Suits.  We’ve played games with those sorts of things before…but not like this.

Using the phrase “You play your way” as their mantra for design, they built the multiplayer aspects of the game around Exo Suit movement.  All players on the battlefield can boost jump, dash, dodge, peek, knee-slide, change directions mid-air, and slam into the ground with a powerful melee attack.  This is absolutely game changing.  Enabling verticality we’ve never seen in a Call of Duty title, the Exo Suit allows players entirely new tactical options and strategies that heavily influenced map designs across the board.   During a short multiplayer trailer (that I sincerely hope they make public) we saw one player chasing another under a skybridge. The player in front, pulling his best Tom Cruise impression, uses his jetpack to fly upwards, jet backwards, and loop around the backside of the skybridge, landing behind his foe to cut him down before he even had a chance to react.  He’s playing his way, and his way is simply badass.

Beyond drastically changing the movement in the game, the team at Sledgehammer wanted to take a critical look at customization in Call of Duty Advanced Warfare.  Using a new system called Supply Drops, players can earn equipment and weapons for completing skill, challenge, and time-based objectives.  These can give you cosmetic goodies, unique firearms, and much more.   The game will still use the same XP system we are accustomed to, but this adds a whole new layer.

Call of Duty Advanced Warfare is a shooter at heart, so Weapon Loot is likely high on your list of things to worry about.  To address that, the team is offering players custom weapons.   If you are a Diablo player, you might call these “Legendaries”.  These weapons slightly modify the base stats of the weapon, giving it a unique name like “BAL-27 – Obsidian Steed”, granting it extra damage and mobility at a slight cost to all other attributes.  Other players might have that same BAL-27 base model, but it won’t have the same stats your unique loot does.  Beyond that, players can add up to 10 custom attachments to the weapon to further affect damage, accuracy, fire rate, range, handling, and mobility.  There are a total of 350 custom weapons currently in the game, including traditional ballistic weapons, as well as directed energy weapons based on real research and prototypes from today.  An example might be the EM-1 which doesn’t use ammunition, but builds heat.  It’s a little like an LMG, but without the reload.

Beyond weapon customization, the team has also improved the Create-A-Class loadout.  Informed by the Pick-10 system in Black Ops 2, the team has evolved this to “Pick-13”.  You can now add score streaks to your Pick 13 (up to three of them), or take none and use those points for other perks.  You can even take a wild card to take four streaks instead – you play your way.

Scorestreaks are also getting a bit of customizations and can be further adjusted to add abilities to them.  As an example, you can deploy a turret into the environment, but it’s way more fun to attach rockets for a cost of another 100 points (that’s roughly one more kill).  Want to pick it  up and use it as a mobile rocket launcher?  That’s the Rippable perk, pushing the cost up another 100.  These modules don’t count against your Pick 13–they just add additional cost to your killstreak.

In another all-new system, players can now work together to get co-op score streaks.  Now any member on the team can join the score streak and add their support, allowing them to experience a score streak and reward that they might not have seen before.  It’ll be interesting to see how this plays out in the wild.

The final bit of customization comes in the form of “Create an Operator”.  You can customize damned near every single thing you can see on your soldier.  Pants, gloves, helmets, tops, knee guards, shoes (I got a pair that looked like red-striped Air Jordans!) and even the Exo Suit can be cosmetically modified to make your character look as badass as you feel.  Since you can now free-look at other characters and their loadout in the lobby, it’s time to put on your game face.

I’ve saved the best for last – the Exo Suit.  The Exo Suit not only enables rapid movements in any direction, including dashing through the air, slamming into the ground, and the ability to reach high perches, but also brings a great deal of versatility.  Rather than carrying grenades, you can equip your Exo Suit with a Launcher attachment.  Your wrist-mounted computer enables lethal tactical options, as well as tracking drones, UAVs, cloaking, and more.  You can also outfit the Exo Suit with a blast suppressor, a flak jacket, fast hands to enable a quick reload, and more to improve your overall survivability.  I sat down with Judah Graham, Call of Duty Advanced Warfare Multiplayer Senior Development Director for a quick interview to dig into the details on some of the game’s new features.

If there was a new feature that was talked about at length, it was the new Virtual Firing Range.  Without loading, you can test any loadout you’d like between maps by simply pressing a button.  You can test out a looted weapon without risking adjustments to loadout and carrying it into battle.  Combined with the Virtual Lobby which allows you to seamlessly check out everyone else’s customizations, these two features allow players to make a great adjustments stress free.

Multiplayer Lead Designer Greg Reisdorf took the stage and showed us the four maps we’d experience, entitled Biolab, Ascend, Defender, and Riot.  These four maps would get a rotation of Team Deathmatch, Uplink, Hardpoint, and Capture the Flag, but he also paused to mention that there will be 12 modes available to players on launch day, including fan favorites Kill Confirmed, and Search and Destroy.   He also took a moment to introduce two of those modes, a new take on the mode War called Momentum, and the Uplink mode mentioned above.  This mode is essentially American Football.  Both sides try to capture a drone and deliver it to the opponent’s uplink.  Jumping through the floating uplink gets your team two points, and throwing it gets you one.  Holding the drone means you can’t use your weapons, so being a carrier is dangerous work. If you’ve already got a strategy of throwing the ball towards your attacker to ‘disable’ them for a moment for you to take your shot, you are already getting how Uplink works.

We’ve compiled a pair of videos for you to see the game in action – one for Hardpoint, and the other for Capture the Flag.  If pictures are worth a thousand words, these videos will be tell one hell of a story.  The action is fast paced, incredibly balanced courtesy of the three year development cycle, and the game feels completely new thanks to the Exo Suit.  You really need to see it in action to fully understand just how revolutionary Advanced Warfare is to the franchise, so enjoy these two videos to do exactly that: