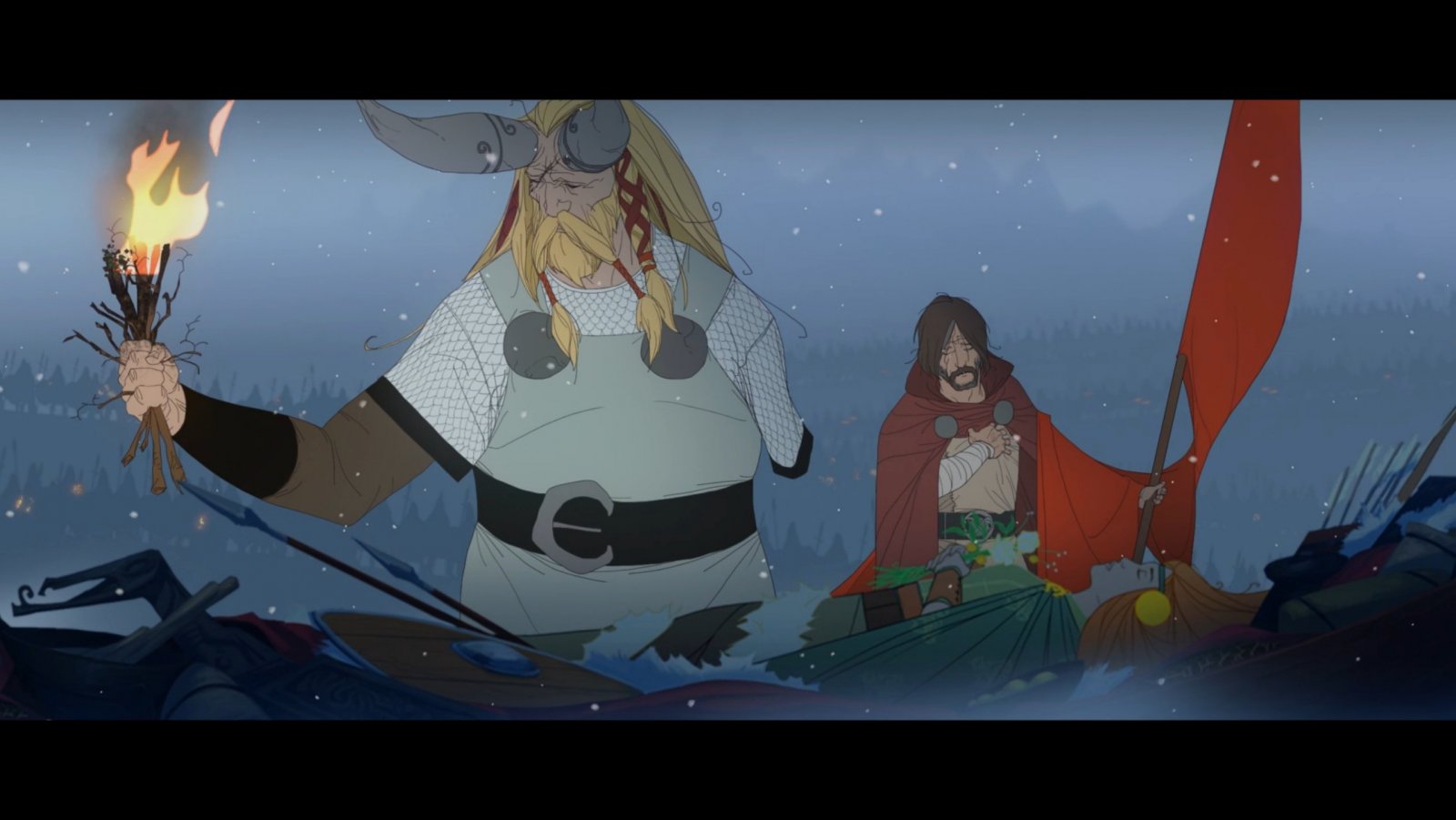 The Banner Saga recently reached the end of the road earlier this year with the release of The Banner Saga 3. You can get caught up on our thoughts on those games right over here, but the finishing touches on that story involved getting those games on retail shelves. Stoic has since put the whole trilogy in a box on PS4, Xbox One, and Switch, so anyone who might have missed the boat on these exemplary tactical RPGs, can embark on their journey to guide an embattled caravan to the ends of a beautifully realized, viking-inspired world. After the latest release on Switch, we had an opportunity to talk to the series’ Creative Director, Arnie Jorgensen, and the Head of Production and Game Operations, Andy Johnson, about what this long road has been like for them and what the future holds for the team at Stoic.

Considering The Banner Saga 3 was the second game you helped fund through Kickstarter, it seems like you often had to work exceedingly hard to get your game (and trilogy) to market, how much of a challenge has it been then bringing those games to retail? Particularly with the Switch version that is about to hit store shelves.

Johnson: One of the biggest challenges was managing all the moving parts. Game development is like cat-wrangling on the best of projects, as there is an obvious “tension” between being creative and hitting a release date. All of the team want to make the very best game possible but there is a point when you have to draw the line in the sand, lock everything down and release hoping you’ve hit the quality bar and experience players are expecting. Add to this all of the platforms we released on (Stoic is a small studio and we released on nearly every major gaming platform), all the DLC (Kickstarter exclusives and non-exclusive), all the languages we localized to (we released in 10 languages including English), the patches, etc. You can imagine how challenging a release can be.

For the Nintendo Switch specifically it was a new platform for us to develop on, so some of the additional challenges it posed were more technical, like the game states between console and mobile modes. I, personally, am extremely proud of what Stoic accomplished with the release of Banner Saga 3 and completion of this game trilogy.

Were there any challenges in bringing all three games into one package on the Switch? That’s a lot of game.

One of the biggest challenges was cart size and squeezing all 3 Banner Sagas to fit. Banner Saga has a shared code base, what this means is that at the very core of the game is central tech like the game engine but also there are a lot of shared assets. So when you run Banner Saga 3, your gaming platform of choice is running many components that also run in Banner Sagas 1 & 2 – they are not the same games but have some of the same component parts, like ingredients when baking.

Take an ability – Bloody Flail for example – there is the name and description, the animation files and the game magic that makes that ability happen. This ability is shared across all 3 games and so are those files and assets. When collecting the Banner Saga Trilogy into a single bundle, to save space, we had to find and remove many of the duplicate assets, leaving only a single instance of each, and make sure everything still worked. This proved quite challenging and we found several instances where assets, etc. were called but no longer present in the bundle – this is why testing is so important. There were of course other challenges, but this is the first that springs to mind.

With the trilogy finally concluding, and now getting a physical release on Switch, will the team be continuing to add content to the game or will you be taking a moment to catch your breath for a bit?

Jorgensen: We’re already knee deep working on Survival Mode for Banner Saga 3. It’s a game mode where players can fight through Saga 3, one battle after another consecutively, and see if they can beat it. There is permadeath, changes in turn order, achievements and other fun stuff for those that just like the combat without story. Right after that we’re on to the second Kickstarter promise, Eternal Arena. This is a mode where we hand over player friendly tools for our battle system and let [players] have fun building and fighting any battle with any friendly and enemy units they want. We’ll turn over a bunch of different systems for them to tweak as well. Eternal Arena is what our community has been asking for for years.

There seems to have been a recent renaissance around Norse themed worlds in games in the past couple of years, what is it for your team that drew you to that setting when you started the series? And especially now that you’ve finished, what do you see as the differentiating factor between your world and something like God of War’s Norse world (just as a recent example)?

Jorgensen: Yes, we’ve been quite surprised and happy about the Norse resurgence. Banner Saga started as a somewhat generic medieval story setting, but I grew up reading books like Leif the Lucky and also Nordic myths. My family came from Denmark in my grandfathers time (funny, I just recently found out our DNA is actually from Norway) so I just kind of grew up around stuff like that. Anyway, we thought it would be far more interesting to set the series in some fantastical Nordic setting. We were just doing stuff we thought was cool.

Stoic was founded with just 3 people. I understand that number has grown fairly significantly since then. How has it been adapting from a small upstart to a larger group?

Jorgensen: Stoic has grown organically. We hired a couple more people for Saga 2 and then more for Saga 3. Every game has been supported on multiple platforms, and honestly, just because [it’s] too much work for 3 guys to do. We’re up to 14 now, and I’m very happy for all the help. The culture at the company has been maintained because we’ve grown slowly.

Music plays such a strong role in The Banner Saga series. Have you made any changes to the way you approached the score for the conclusion to the series? Additionally, there have been excellent vinyl printings of the soundtracks from Austin Wintory for past games; will there again be a physical release of the soundtrack to The Banner Saga 3, and if so, when can people expect that to release?

Jorgensen: Yes! We’re doing another physical release with iam8bit and will get it on sale soon. The score was approached exactly the same way through all 3 games; hire Austin Wintory and let him do his thing. He’s like an automated machine and really controls all the music for the game. He talks with Alex [Thomas, Lead Writer on The Banner Saga 3] in depth to make sure he’s writing the score to match the story and then just turns out gold. He’s one of the nicest, most talented guys I know.

Jorgensen: We’ve had nothing but stellar experiences with Kickstarter so I would not take it off the table. The amazing, kind, helpful KS community that gathered around the game is one of the high points for Stoic. That being said we’d have to see if it suits the next game we do.

Speaking of what comes next, obviously it’s too soon to hear exactly what that is, but so far we’ve just seen The Banner Saga. Now with that series coming to a close, what is it that you feel is the defining aspect of your studio that you’ll want to carry over into your next project? Can we expect more story driven or tactical games? Is it the striking art style or player choice? Or are you planning to completely start fresh?

Jorgensen: Stoic will remain focused on what have a passion for, Tactical RPGs. And yes, we’re already working towards the next game which we’re really excited about it. It will be a bit different in gameplay to what’s seen in the Banner Saga Trilogy. Huzzah!

The Banner Saga Trilogy is available now for PS4, Xbox One, and Switch. If you haven’t checked out this brutal, emotional fantasy RPG, I urge you to give them a look.