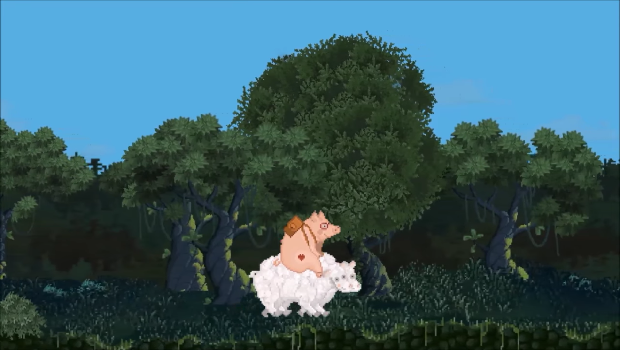 An interesting take on point-and-click adventure games, Psilocybe Games’ Pigsodus is currently on crowdfunding platform Kickstarter. The game follows Horace Oinkstein, a smart pig that longs for freedom from his farmhand captors and uses his wits to try and escape. We speak with Peter Lipert, founder of Psilocybe games, to talk about Pigsodus development as well as support from a well-known name in the industry.

Gaming Trend (GT): The Pigsodus Kickstarter looks great so far; from the trailer alone, I see a hint of wackiness that pays homage to adventure games of the 80s and 90s. What were your primary inspirations for it?

Peter Lipert (PL): It won’t be any surprise to you that Monkey Island influenced the direction of our studio’s first game. The atmosphere and the surrealistic, absurd humor were pretty much the most important factors here.

GT: Speaking of inspirations, I know that Ron Gilbert (aka the Grumpy Gamer) backed the project. How did you guys feel when you got the news?

PL: Amazing! This means so much for us and has given us loads of motivation!

GT: Point-and-click games are making a comeback in recent years. What makes Pigsodus different from the other games in this genre?

PL: We are not afraid to transgress the traditional borders between the video game genres; Pigsodus will be a hybrid game. [There will be a] multitude of different gameplay mechanics will keep the players hooked and boredom at bay. Also, the story and setting sets our project apart; the contrast we created between the epic and somewhat harsh storyline and cute graphics/character design is unique [in Pigsodus].

GT: You say that there will be RPG elements and other gameplay mechanics in this title. Were there any obstacles in developing a point-and-click adventure game around these mechanics?

GT: For fans of the project, are there going to be any more surprises going forward?

PL: We are in talks with a publisher, but can’t say more.

GT: Are there any last words you want to give to our readers regarding the game or other developments? Maybe some words of wisdom?

Pigsodus is currently on Kickstarter until August 16th with a $30,000 funding goal. The game is planned for release on PC and Mac.