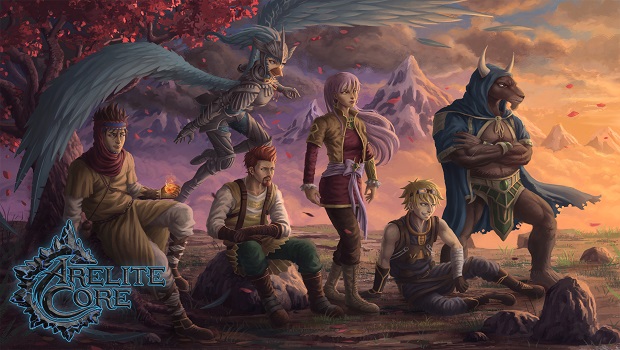 Five years into development, Dragon Slumber is set to release Arelite Core on Steam this week. We got to talk with the Kevin Giguère about the game and its development, as well as the obstacles and insight in the game being a mostly one-man project.

Gaming Trend: Dragon Slumber was created in order to make Arelite Core. How was the development process like when you first started in 2013?

Kevin Giguère: The development of Arelite Core actually started in 2012, when I started work on the JRPG engine that would support the game. Although I didn’t have a proper game design at that time, I knew that I wanted to do a lot more than what most other available engines were offering for a JRPG. After completing the groundwork for the engine six months later and putting out a proof of concept game, I started to design what would eventually become Arelite Core. Then, as I started hiring artists for the project in early 2013, I officially founded Dragon Slumber.

That first year was pretty slow, it was a learning process for me to hire artists and manage them from a distance. I lost nearly ten thousand dollars to an ill-advised hire for a company that no longer exists and I had to cycle through a lot of artists who couldn’t quite hit that note I was looking for. From 2014 onwards, I was spending a lot less time working on the game and instead managing the team, approving the art, providing descriptions for what I needed and so on. A lot of the game’s implementation really only picked up during the last year, when most of the art was complete and I could focus of the remaining programming and design aspects.

GT: At first glance, I can see that Arelite Core pays homage to the 16-bit JRPGs of yesteryear. What main inspirations did you have when making this game?

KG: Final Fantasy 4 was my main inspiration for the story, because I like its structure and pacing. It’s a bit more linear, but I feel that it helps to make every character interaction more meaningful. Because I know who’s in the party at any given moment, I can write scenes specifically around that and the banter becomes more natural.

Final Fantasy 6 and Chrono Trigger were the other two big inspirations, which I often analyzed to solve design issues. Only having 5 blitz moves for every character was inspired by Chrono Trigger for instance, replacing quantity with more meaningful techniques which remain useful throughout the adventure. Those games really define what a JRPG should be with their story, their gameplay, even the layout of levels.

I could probably name another half a dozen games which really helped define Arelite Core, often in very specific ways. Breath of Fire has items to reduce encounters for instance, which no other JRPG seemed to have but I thought it was a terrific idea. Dragon Quest 5 has you opening cupboards and breaking pots to find items.

Finally, it’s not a game, but I also want to mention the bi-yearly speedrunning marathon Games Done Quick. Originally you couldn’t rename characters in Arelite Core, but because they have donation drives to rename characters during speedruns, I decided to add the feature. I also added a skip cutscene feature because of comments from speed-runners, so I hope you guys enjoy the game!

You can also rename your armor and weapons, so be prepared to come up with dad jokes and terrible puns.

GT: As for the story and cast itself, I’m really fond of Baeme’s comedic personality (although due to the ability to rename characters, I changed his name to Anthony). Who’s your favorite character in the game?

KG: As far as personality, Baeme is also my favorite character, probably because he’s the most similar to me. We share the same sense of humor, very reactive to what’s happening around us, so I found him really easy to write for. Usually I would just write a scene and as things developed, I would try to think about what I would say in that situation, which is usually a sarcastic quip. Incidentally, Baeme was also the toughest character to name, and I only settled on Baeme after about a year of development, when I needed to set up a website for the game.

I also really like Aurek, the madox shaman, because he was my go to whenever I had a cool fighting move I wanted to add in the game. He’s like a wrestling summoner, fighting with his fists and a drop kick, invoking monsters, and he even has a pile-driver which is very reminiscent of Sabin’s suplex in Final Fantasy VI.

Me when I make obvious observations about anything.

GT: The battle system is something I found excellent; it’s one of the most entertaining turn-based mechanics I’ve seen in a long time. How did you decide on making it compared to an active-based system?

KG: One of the things I wanted to ensure for Arelite Core is to continue having a sense of progression,which meant cutting out a lot of artificial waiting. That’s why I made battles turn-based, instead of acting, there’s always something happening or a choice to be made. That’s also why there are no inns in towns, you just heal when you enter them.

I also wanted to ensure that battles didn’t just become a repeated series of “Attacks”, like a lot of old school JRPGs did. That’s why I took inspiration from fighting games on a lot of aspects, like having a stun meter, a “super meter” that builds up as you battle and combo system. The stance system, where you customize your characters’ abilities, was created because I wanted to justify selecting a defensive option, which in turn increases the strategy required in every fight.

GT: Were there any difficulties with making the game since it was mostly a one-man project? What components of the project needed extra manpower?

KG: Being a one man project meant that I had to emphasize my strengths as much as possible. Whenever I would encounter a problem, I would first try to program or design around it. That’s why a lot of my dungeons have an interactive component, it was a way to make them feel very different without relying on a lot of new art.

That being said, the game is massive, it has a lot of locations, characters and monsters and I had to hire over 20 artists to produce all of that, over the course of the last four years. I also worked with a composer for the 30 piece retro soundtrack, had 2 sound effects composers, and I even hired someone who edited trailers for me.

Even though this is a mostly one-man project, Arelite Core wouldn’t have been possible without the contribution of all of those people, they’re definitely worth checking out in the credits because they’ve all done a fantastic job.

GT: The independent market is starting to make a renaissance on Steam and other digital storefronts. How do you think that the indie market has changed the gaming ecosystem?

KG: Steam has definitely really helped the proliferation of independently developed games, as has game making tools like Unity. That being said, it also means that there’s a lot more competition on the market right now. Each year, Steam basically doubles its catalog of games, which makes it difficult for any developer to even get noticed, especially as “indie” takes on such a broad term, from one guy in his basement in his spare time, to dedicated projects costing in the millions.

But as a gamer, I also think that it’s fantastic, because there are games of every genre, every style and every price tag being released all the time and a lot of them really manage to push the boundaries of creativity.  Ultimately I definitely prefer this more open model with a lot of choices than the more restrictive one we were stuck with before.

GT: Are there any plans to port this game to consoles or handhelds? I could definitely see myself playing this on a 3DS.

KG: Right now there are no plans to port this game to other platforms. Although I would love to do so, because I’m a one man team, I need to be very careful where I spend my time. I recently quit my job to become a full time game developer, so if I’m not releasing games that sell, then I’m not eating and it also makes it more difficult to contract the right people to make new games. But I would love to release my game on other platforms, I’m really proud of Arelite Core and if there’s interest for that, I’ll definitely look into porting it.

GT: I ask this of any Canadian developer, but here goes: poutine (fries with gravy and cheese curds) or all-dressed chips?

KG: Poutine, definitely. It’s nigh-criminal that our national dish doesn’t seem to have spread globally as much as it deserves. I encourage everyone to travel to Canada and sample it sometime, it’ll change your life.

GT: Finally, any last words of encouragement, news future projects, or where our readers can catch up on any updates?

As Arelite Core’s main development is winding down, I’ve started work on a very different game, a trippy obstacle avoidance racing game, kind of like a mix between F-Zero and Boson X. I’m also preparing a piece of free DLC for Arelite Core which will include a Colosseum mode and an extra bit of story.

And finally, to all the lonely devs out there, I want to say that “it can be done”. It’s tough making a solo project, it’s expensive when you’re ambitious, it’s exhausting and it may require years of sacrifices. But it can be done and I think it’s worth it. Here’s hoping everyone else will agree.

Arelite Core will be released on Steam February 8 on Steam. Check back here for our review when the game is released.