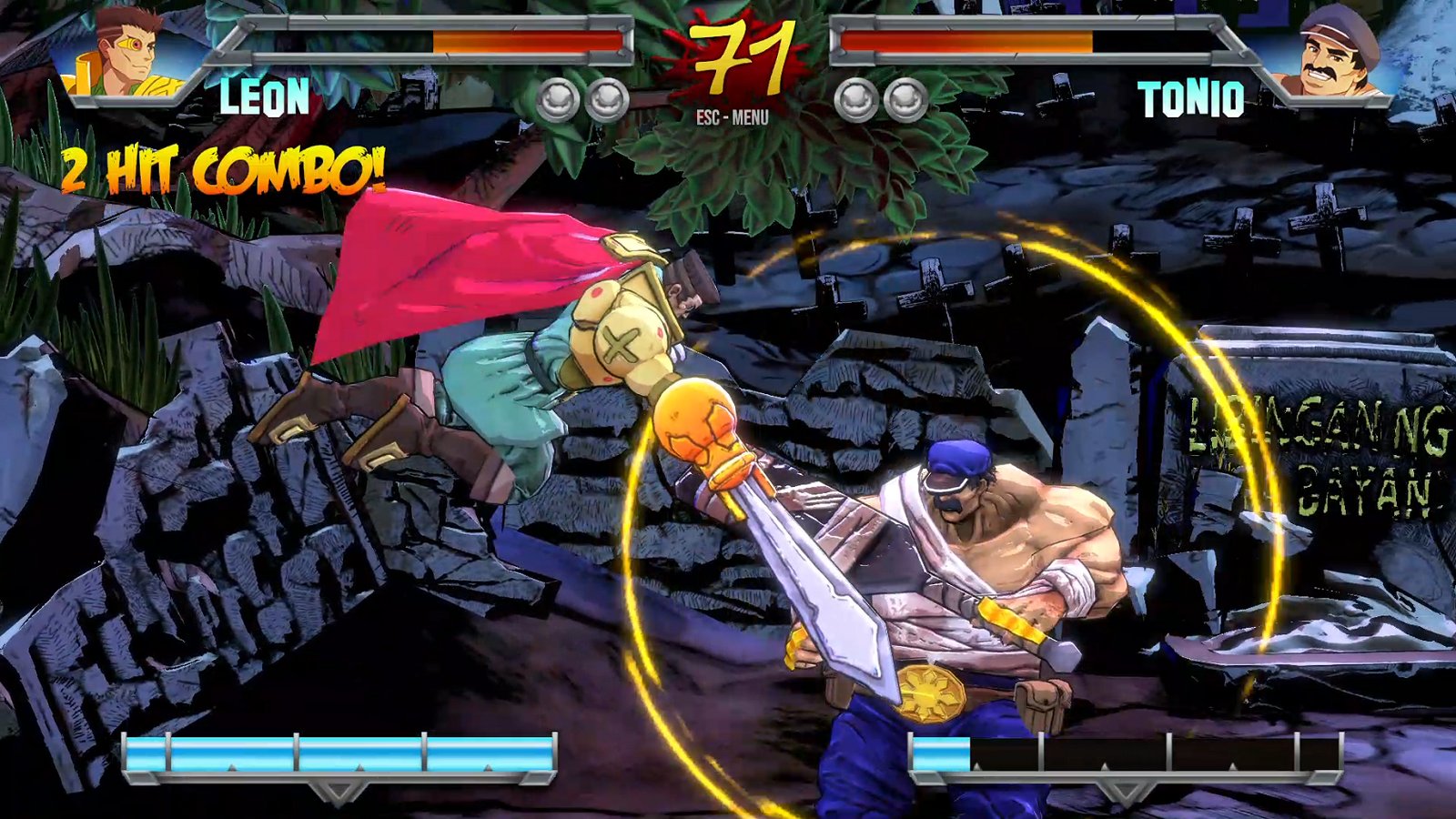 Filipino developer Ranida Games recently released its Kickstarter last week for the fighting game Bayani, which aims to be released on PC in the near future. With the game’s main fighters based on popular Filipino figures, the developers hope to create a game that introduces newcomers to the rich history of the Philippines as well as a new and refreshing take on the 2D fighting game genre. We got to talk to Ben Banta, CEO of Ranida Games about the developer of Bayani, as well as the what it means to create an accessible and entertaining fighting game.

What was your inspiration for Bayani and its general fighting mechanics?

It all started back in September 2015 when an indie movie about one of the country’s National Heroes, Heneral Luna, was met with critical acclaim. Following the film’s release, a social media post went viral as a group of students asked why one of the actors never got up from his chair during the entire film. The hero he was portraying was Apolinario Mabini, hailed as the brains of the revolution and someone who suffered from polio which was then incurable at that time.

This brought upon a sad realization that the younger generation had little awareness with the country’s history and national heroes. Around this time, a tribute art concept where the country’s National Heroes were re-imagined as classic fighting game characters also went viral in Philippines social media. Ranida Games contacted the character concept artist, Anthony Dacayo II, and partnered with him to make this concept into a reality. Following this, development for BAYANI started with the aim of educating the younger generation about our history by associating them with the characters in the game.

As we were developing BAYANI, we realized that we, as devs and players, were pretty bad at the actual execution of moves. We were avid fighting game players but we were nowhere near as good as we would have liked as we were still having trouble executing the traditional fireball move in our own game. This led to the idea of making the game’s move execution more accessible and that is why most special moves only require directional input and a single button press. We want to use this game as a platform to pique the interest of the younger generation and we wanted the game to be easy to pick up to a lot of players. For the other game mechanics, they were simply evolutions of ideas that we liked from other game, things that we thought that our game might need, or were a result of things that the engine can or can’t do.

The game has been in conventions and other events as well as covered at local news outlets. What is the fighting game community like in the Philippines? (Last time I went in 2012, Tekken Tag Tournament 2 machines were everywhere!)

The Fighting Game Community in the country is amazing! It has become a lot bigger and is continuously growing with tons of events and content available. They are very welcoming and accommodating to newcomers and even developers. In fact, our experience with the community is what actually encouraged us to make the game a serious and competitive one.

Fighting games like Street Fighter and King of Fighters are usually known for their deep and complicated movesets, but games like Skullgirls, Dragon Ball FighterZ, and Smash Bros. cater to newcomers as well. What audience do you plan to reach with Bayani?

As our initial goal was to get the younger generation interested in our History, we want the game to be easy to pick up and very accessible. However, as we were developing the game, members of the FGC were urging us to make it deeper and more competitive. As a result, we are making BAYANI easy to play and learn—especially for newcomers in to fighting games. However, we are still striving to give it some level of depth that intermediate and advanced players can enjoy.

What are your favorite fighting games to play?

I sometimes play Tekken 7 as the Tekken series is very big in the country as most Filipinos who owned a PSP back in the day have played it at some point. Skullgirls is insanely fun to play with its quirky roster of characters. Blazblue Centralfiction is my default anime-fighter of choice. However, the original Marvel vs Capcom still holds a special place in my heart as it is the game that really introduced me to the genre as well as my first experience in to the local FGC back when I was still in school.

Bayani has been in development for a while. How has the game changed during this time?

Initially, the game was supposed to be a simple mobile beat-em up game. However, when members of the FGC played it, they urged us to turn it into a full PC fighting game. With their help and feedback, we went back to the drawing board to redesign the characters and the mechanics and then the game has continuously evolved for the better.

How did you decide on which Filipino heroes to model your characters? Do you have any other characters you want to create next?

Our partner character concept artist Anthony has already made a lot of concept art and designs for a lot of our National Heroes so there will be no shortage of designs for a particular hero if we wanted to make them next. For the initial roster, we opted to choose the characters that have a greater impact in the over-all story and narrative.

We are definitely planning to add more characters in the future. The first ones to be added will be those who didn’t make it to cut for the initial roster and of course we need to add the next set of antagonists as well.

Related to this, who’s your favorite character from the initial cast?

There are two favorites and the studio is split between them. Joe is popular as he is our main protagonist, the easiest to play, and is the basic jack-of-all trades type. He is based off our National Hero, Jose Rizal, which makes him even cooler.

On the other hand, Tonio is based off General Antonio Luna and is definitely close to our hearts as he is literally the character that started this all since the game was conceptualized because of the movie Heneral Luna. Also, he’s big, imposing, carries a huge paddle, and deals a ton of damage so what’s there not to like!

The stages are also modeled after real life locations in the Philippines. Was it difficult choosing which stages would represent each character?

It was actually easy to decide on the stages as there are a lot of notable locations that have a very deep connection to the characters. We wanted every stage to reflect something about that character and there are many notable landmarks that are often associated with the National Hero. For example, the idea of Jose Rizal and Luneta are almost inseparable. Think Emilio Aguinaldo and Cavite and the declaration of independence will be the first thing that Filipinos will think of.

Are there any Filipino artists you’re listening to right now? (I’ve been listening to the classics from my parents, but I’d really like to know if there are any cool modern OPM artists out there now!)

December Avenue, Ben & Ben, Rico Blanco, Moira Dela Torre, IV of Spades, and Unique Salonga are some of the newer OPM artists that I listen to on repeat. However, the classic OPMs are still on my heavy rotation: Eraserheads, Rivermaya, Parokya ni Edgar, Wolfgang, and Kamikazee are still some of my favorite OPM artists ever.

Are you planning on making any console versions of Bayani in the future?
We have been thinking with the idea and we’ll probably consider it in the future once the game is out. However, right now we are more focused in to releasing the game for PC first. If reception to the game is good or if the demand on our Kickstarter campaign is high we will probably look into it earlier.

Finally, any last words or advice you’d like to give our readers?
To everyone reading this, please support our game BAYANI, we put a lot of love and pride into this game. Take part on our journey in bringing the first Filipino made fighting game featuring our history and culture to the world. We are currently running a Kickstarter campaign to enable us to add more polish and feature into the game and your support will be highly appreciated. BAYANIHAN NA!

If you’re interested in the game, check out the Kickstarter, which is currently running until the end of the month. Stay tuned for more news here on Gaming Trend.