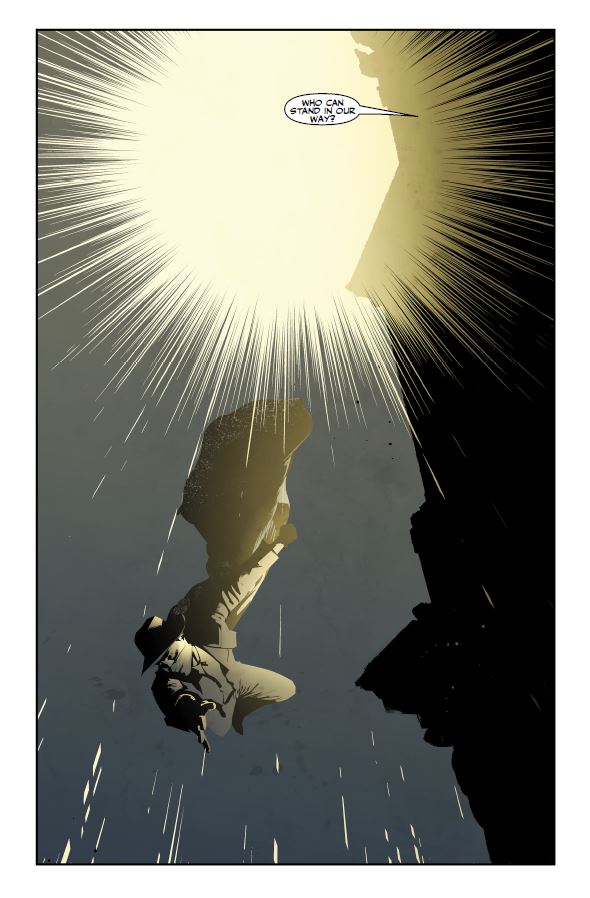 With growing consistency, video games have been seeping out of their prior constraints and appearing in other forms of media. From films, to novels, to comics- there seems to be fewer and fewer limitations on how a person can enjoy their favorite creative content.

It’s a very exciting and inspirational time, and Titan comics has been owning their place on the spearpoint with their numerous series of video game inspired titles.

Getting a chance to interview some of the talents behind these books, Gaming Trend presents a quick Q&A with Assassin’s Creed: Templars creators Fred Van Lente (writer) and Dennis Calero (artist).

LB: Guys, you totally have me hooked on this series, which was a very pleasant surprise. It’s a wonderful ride so far.

FVL: Glad to hear it.

LB: Since this was an entirely new perspective and narrative design for the Assassin’s Creed universe, how did you guys come up with the idea? And how long did you have it planned?

FVL: Titan approached us about doing the book, and I went back and forth with [the] AC group about a couple of different approaches, and this was the one they liked the best.

DC: it was a long incubation process because Ubisoft is very invested in AC as a universe, as one larger story taking place on several fronts.  Sometimes that makes things a little slow, but on the plus side, the fans know we’re telling stories that have [an] impact on the AC world as a whole.

LB: So, Black Cross and Darius Gift, where did the idea for these characters come from?

FVL: With Black Cross, I was trying to get some of the “cool” factor back from the Assassins, I figured that the Templars would need some kind of mysterious enforcer too, if only for internal policing, to prove they aren’t the bad guys the Assassins say they are. And when you have an uber-experienced and competent character like Black Cross it’s good to pair him, for contrast, with a neophyte, and that’s what Darius is.

LB: The art in this series is fantastic. I’ve known some comics series (that) over-indulge in stylization become hard to follow as a result. How do you keep your balance so spot on, and where do you look for inspiration?

DC: Thank you. I draw inspiration from sources in and out of comics.  I collect old photographs, and Fred’s passion for history has rubbed off on me.  I love Alex Ross and Jae Lee, Howard Chaykin and many others. I also look at painters like Caravaggio and Vermeer.

LB: In the Assassin’s Creed video games we typically see it from the one perspective. What made you decide to tell a story from what has traditionally been the antagonist’s point of view?

FVL: Ubisoft very much wants the conflict between the Assassins and Templars to be seen not as a cut-and-dry good-versus-evil battle, but in a grayer moral realm, and the way you do that is by [presenting] the other point of view as equally as valid.

DC: I think both sides are crazy and I wouldn’t mind seeing a third faction just looking to reign these lunatics in!!

LB: So, I feel the need to ask. Black Cross is a dark-skinned character, which considering the comic/movie climate right now (and my personal readership), immediately made me think of Black Panther’s namesake to an extent. Is there any direct connection between the character’s ethnicity and his alias? Or is there something else to the title? (No spoilers!)

FVL: I don’t think it’s too spoilery to say that, no, there’s no ethnic connotation there. I’d go so far as to say the role of Black Cross predates the use of the word “black” to describe African peoples. The current Black Cross is not the first one, and we may be seeing his predecessors — and successors! — as the series moves along. That said, though, since Assassin’s Creed is very much about lineage and passing things down from generation to generation, it may be a family business…

DC: The Black Cross doesn’t need to be black any more than green lantern needs to be green. I don’t see the need to add to that pile.  Naming African-American heroes “black – something” came from a very proud place.  We’re going to make this a feature of the character.  I want to think we’re slowly coming out of that need and this can just be a black man who happens to be the Black Cross at this point in time.

LB: What made you guys decide on setting this story in the 1920’s?

FVL: I got my start writing sourcebooks for the Call of Cthulhu RPG (like this one), which is set in the 1920s, and I wrote one that was never published for Shanghai. So when Lizzie Kaye, my editor at Titan, and I started talking about good time periods it was the first to pop into my head.

DC: I didn’t have a hand in that decision but I’m happy we [did it].

LB: Is Assassin’s Creed: Templars going to continue following Black Cross? Or will the series change in the future?

I just want to thank Dennis and Fred for taking the time out of their busy schedules to answer some of our questions. (They really are a classy pair of guys!) I’m a big fan of the books and hope they stay around for a long time! You have our support here at Gaming Trend!

Anyone interested in the Assassin’s Creed: Templars series should check it out at the Titan Web Page, and while you’re there, take a peek at some of their other great books. There are a lot to choose from, and they cover a pretty wide range of fictional tastes.