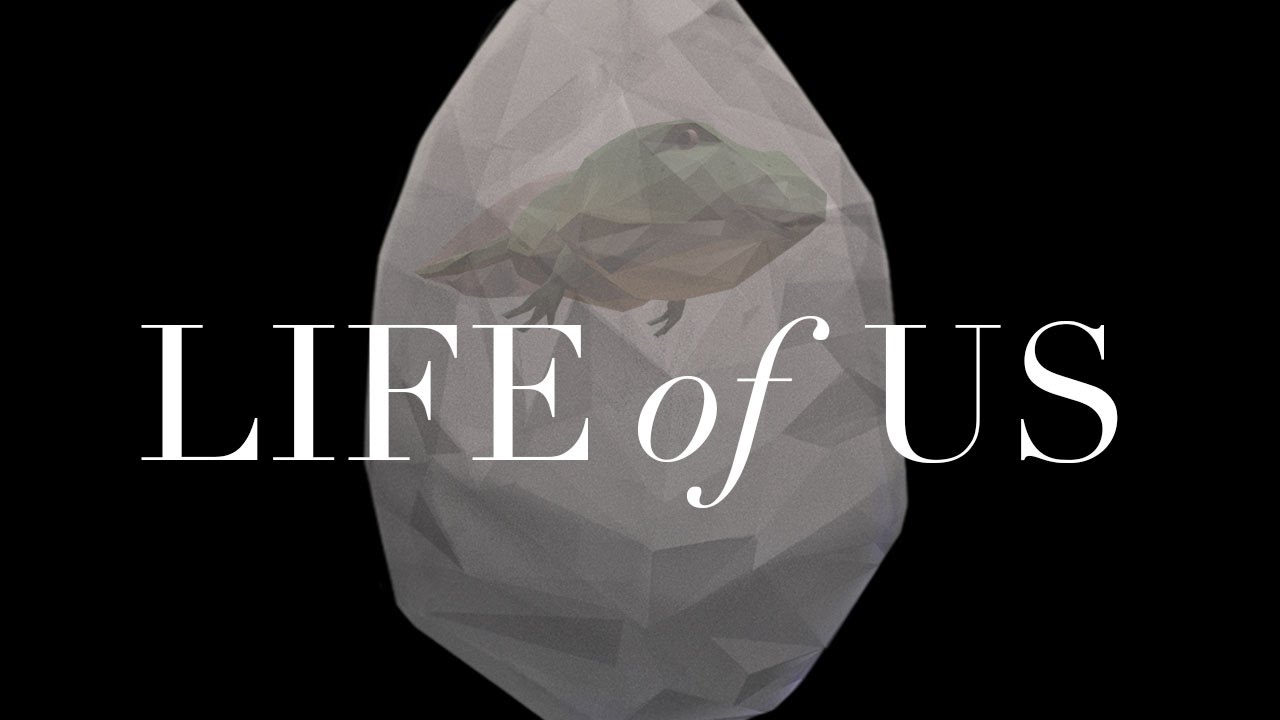 I slipped on a virtual reality visor, ready to traverse millions of years of evolution thanks to the two person experience, Life of Us, with my good friend Tim. We were separated, located in different booths and locked into the private worlds within our VR visors. The words “This isn’t a movie… This isn’t a dream…” loomed momentarily on the horizon, fading away as Tim and I stepped into a shared virtual experience. Tim appeared before me, a strange, low-poly amoeba with a smiling face. I waved, and he laughed sending bubbles trailing from his mouth. The laugh was his–if you’ve ever met Tim Mattson, you know his distinct and infectious laugh– but it was also different. Small, high pitched and tittering, more appropriate to the tiny amoeba form he was currently inhabiting.

Tim’s modulated laugh set me laughing, my modulated laugh made him laugh even more, at which point he realized the sound of his own laugh, and in tandem we doubled over in hysterics, filling the primordial soup of our virtual home with bubbles. Life with Us did more than just make us laugh; it let us play, made us flee in terror, fly through the skies, and dance at the edge of time alongside a twerking gorilla. It created an incredibly unique experience which didn’t end when we took off our visors; we spent the entire ride home talking about life as a lizard, about soaring through the skies on leathery wings, about pulling literal monkeys off each others backs, and about being consumed by technology. This wasn’t something we sat through then moved on from, this was an experience we were an active part of, something far more powerful and memorable than a simple seven and a half minute experience should be.

This two person experience allows you to move around within your physical space, but more importantly, it moves the avatars of you and your partner through both time and space at a steady, constant rate. It’s not a game, you don’t have to worry about the other person moving too fast or too slow for you, it’s a story on rails, and it moves just slow enough for you to take it all in, but just fast enough that things change just as you’re getting comfortable in your new skin. Instead of your own avatar, which places you in the world, Life of Us physically transforms you into an ever evolving creature. This helps get your ego and, with your sense of self out of the way, allows you to just be, and readily accept that you’re a tadpole or a gorilla.

Life of Us does a brilliant job of using virtual reality, a technology often criticized for isolating people, to capitalize on the well documented science that sharing experiences brings people closer together. One of the most powerful ways it doe this is through encouraging both participants to talk or at least to constantly make noise, which creates some hilarious results, such as the ones detailed above. We found ourselves making noises to match our current bodies, shouting “Bloop, bloop!” while underwater, and making menacing, reptilian noises while inhabiting the form of a prehistoric creature. We spent the entire day after playing Life is Us looking for unexpected moments to make dinosaur noises at each other, just to make the other laugh.

After the hands on, we spent the rest of the day making dinosaur noises at each other

Life of Us producer Jonny Ahdout took the time to sit down with me and chat about the Life of Us experience, the Within company, and the future of VR.

It seems like your main goal with Life of Us is to bring people together, to help them bond through virtual reality.
“Absolutely. There’s been a lot of talk early on about VR being isolating. A lot of images were going around the Internet of people being in their headset, sitting in chairs, and it seemed like they were completely disconnected from the world that was immediately around them, and just passively taking in an experience they were seeing in the headset. We think that is probably a symptom of the early days of VR, that we’re just at beginning of what the technology wants to be, and what the media wants to be. Inherently, if you’re playing a 360 video that’s immersive and happening around you, then yes, you’re not quite interacting with the story at hand, and you’re not quite interacting with the world around you. However we saw that as an opportunity to show people what we see as the future of virtual reality, which is a medium that, we believe, will connect people from all around the world and deliver incredible experiences to them.”

There is a lot of talk about VR being isolating, but the same was said about the Internet, video games, and even comic books, but I’ve found most of my closest friends because of these mediums, several of whom live in other countries. I really like that you see VR as something to bring people together.
“There’s something magical about feeling like this person is only a couple feet away from me, even though they’re really far away. That’s what keeps us excited, and keeps us thinking forward about how can we iterate on that magic, and what’s more magic that we can come across that will show people that this is a medium that’s different than everything else that came before it.
“It’s creating incredible experiences that you can’t necessarily have in the real world, and having the ability to share them with whoever that may be, if that’s someone that’s very close with you that’s in the same room, or a total stranger across the world.”

Do you have any stories you’d like to share about people who have tried out Life of Us?
“We had this grandmother in her 60’s from Park Cities, Utah, and then this student from Japan, who I think was sixteen and barely spoke any English. So we had these two women who were complete strangers to one and other, didn’t speak the same language, totally different age groups, had virtually nothing in common. They go into the experience together, and they were yelling and shouting and jumping and running, and they came out of it hugging. These two women who otherwise would never have been able to connect and share a memory came into this thing and bonded, and that was really special for me to see.
“Probably the best one to write about was, we had these two people go in together and they came out and started dating. Last time I checked, they are still dating. So that’s a use case we never planned for in development.”

How did you even come up with the idea for an experience that’s so quirky, so fun, but so friendly to VR newbies?
“All of the thinking was geared around how can we just get these two people to have fun talking to one and other, moving with one and other, collaborating with one and other on this adventure? Our solution was to give them new bodies, give them new voices, give them new abilities, and let them have fun with them.
“We took a lot of inspiration from amusement park rides, you’re moving through the space, only here, you’re absolutely participating in it.”

A lot of your goals remind me of the work of Nonny de la Peña, who is really using VR to teach people empathy. Do you think you have similar goals?
“For a lot of people in the virtual reality industry, it comes down to creating experiences that shape you as a person while you’re in there. Whether that means you bonded with somebody else or you had a crazy adventure that you smile at every time you think about it, created a new memory that’s wonderful and awe inspiring, or getting to know what it feels like to be in the perspective of somebody who’s going into an abortion clinic, or somebody who’s trapped in a prison cell. I think a lot of it comes down to giving you experiences you otherwise couldn’t have, and as a result you grow as a person.”

What’s in your future? Expansions of Life is Us new projects, or a little of both?
“As far as Life of Us, we’re really, really excited that it’s in IMAX. There’s a lot of hype and attention around virtual reality, but there’s quite a barrier to entry, specifically because of the visor cost, and because they need to be tethered to a rather powerful computer. So for somebody who’s not an early adopter, but who wants to experience new technology anyway, how are we gonna deliver experiences to that that are made for everyone? Having a physical destination where people can and try it, and spend twenty minutes with a small ticket fee is really really exciting to me.
“There are a couple other projects we have in development that I can’t quite talk about yet, but they all are under this mantra of what can we take on that builds technology that moves virtual reality forward? So that might mean what does music creation look like in virtual reality? What does a horror experience look like in virtual reality? Or how can we give someone the adrenaline that an all-star athlete feels on the court in virtual reality?
“[For Within], it’s also a matter of continuing to acquire and license content to put on our platform that creates a home of incredible experiences. We think that a lot of people that are trying virtual reality for the first time will benefit from having a place that they can go and have a curation of incredible experiences to try out.

Any last thoughts you’d like to share?
If there’s one thing I would like to say is that we’re all just so incredibly excited about what the future of this medium holds. This is just the very, very, very beginning, and every day we come across another creator, or another engineer, or another project that shows us something we haven’t thought of before, and expands our vision for what things can be. We’re just incredibly excited to be working with amazing people, and seeing where everything leads.

You can experience Life of Us is by visiting an IMAX VR Centre, and the experience will be releasing to the Within platform, and accessible through both Vive and Oculus, this fall.