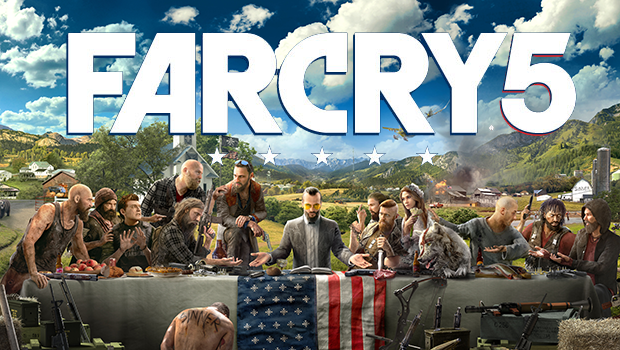 Welcome to Hope County, the beautiful, rural setting for Far Cry 5. I received an introduction to this seemingly sleepy little town and a number of its residents thanks to Dan Hay, the executive producer and creative director for the newest installment of the Far Cry series. Don’t be fooled by its serene and picturesque landscape, this rural town hides a dangerous secret: A militaristic cult by the name of the Project at Eden’s Gate. Built around the the pillars of “freedom, faith, and fire arms,” Far Cry 5 will take players deep into the heartland to face a home-grown threat.

Upon entering Hope Country, players will find themselves caught in a power struggle which will require them to attempt to subvert the well-laid plans of the Project at Eden’s Gate. This doomsday cult believes that a collapse is coming, and that they, like a modern day Noah, must save people. Meet the Family: Joseph, the Father, who follows orders from a voice from the on high, Jacob, his older brother who leads the militaristic wing of the cult, John, the youngest, who has an intimate understanding of the law and uses this to the advantage of the cult, and the sweet half-sister Faith, the peace keeper who ensures all members remain pacified and in line. Together, this devoted family is determined to save the souls of the good people of Hope County, regardless of whether or not those souls want to be saved.

Laying down roots in the same way as most cults, The Project at Eden’s Gate began when John arrived in town and purchased a block of cheap land. The Family and their followers moved in, and due the huge number of people on such a small space, the land around it began to quickly lose value. This allowed the cult to buy up even more cheap land and spread across Hope County like a cancer.

“Many of these people in cults are there for years, and they often have a history of violence. They want control of the area, and they squeeze the people, they control crop prices, they threaten and put pressure on local business. Not everyone in the town is part of the cult, and some are tired of it.” Hay’s history lesson has a purpose, as his team has deliberately crafted a realistic world, both in setting and background, in order to give players a believable, relatable experience. “The town is full of real people, people who have their roots in this town, people who have reason to fight back… people you can befriend, recruit, and create your own militia with.”

Militia, you say? Allow me to introduce a few of the characters you will meet in Far Cry 5, characters who, if you can earn their trust, will help you build a resistance as they fight to take back their town.

Mary May, the owner of the Spread Eagle bar, was born and raised in Hope County. Her family has been terrorized by the cult for years, and now her place of business is being squeezed. She may a normal, small town girl, but if you can enlist her, she could become a key figure to help you build a resistance. Molotov cocktail, anyone?

God and guns preacher, Pastor Jerome Jeffries, has watched for years as the cult preyed upon the fears of his people, twisted the word of God, and has seen his flock go astray. He sees locusts in his garden, and he is willing to take up arms in order to make things right.

Last but not least, we met Nick Rye. In Hay’s own words, “Nick is absolutely the type of guy you want to enlist for your guns for hire in order to bomb s#!t.”

Far Cry is known for its colorful characters and amazing villains, and when I commented that I was a little surprised to see just how believable, how salt-of-the-earth these characters felt, Hay all but beamed with pride. “We met real people,” he said, referencing the time he and his team spent in Montana, breathing the air, getting to know the locals, and feeling things out. “When you’re sitting down and talking to these people, you get the sense that if stuff goes down, they could handle themselves. After that, all you have to do is imagine what they’d do. All we had to do was provide people in the world that are plausible and real, people that have a great voice, people who aren’t a caricature… then allow you to use them as weapons.”

The world of Far Cry 5 is filled with toys, lots of toy. From sledge hammers and baseball bats to guns and grenades to the ability get behind the wheel of American muscle cars, big rigs and even boats; all the basics appear to be covered, along with a few new bonuses. Players will be able to recruit Guns for Hire from among the many residents of Hope County, as well as Fangs for Hire, in the form of specially trained animals such as bears and cougars who can add additional muscle or the player escape from a tight spot. My personal favorite clips included one of the player riding a tractor while firing a pistol with each hand, and another where the player impaled a hostile cult member with a pitchfork. I asked Hay what his favorite new features included, which he answered with a pair of stories from his time out West.

“We had two experiences in Montana that translated to two experience in the game. Number one, we saw that people had planes, these little crop dusting things, and we really got the sense that it could be cool to have these guns for hire that could drop bombs from above. And we wanted to do it in kind of a homemade way--and the plane is amazing! You’ll be able to fly it, you’ll be able to pick dog fights with it, and it creates a whole new vector for Far Cry.

“Later, there was a moment while we were hunting. It was cold, we were tired, it was the end of the day and we hadn’t gotten anything. We had this dog with us, and we were about to home for the day, when the guy goes ‘wait, freeze!’ We sat there watching his dog for what felt like an eternity, and the dog just points, looking at the grass. And at the last minute, the dog made this little movement and this grouse came flapping out. He turned to me and say, ‘Always trust your dog.’ So the idea that you have this dog, this pet that can come with you, that you can trust, that you can have a relationship with, that’s gonna be a whole new thing for us.”

Far Cry 5 seems to have neatly steered itself away from racial motivations for its villains, however the idea of setting up a rural religious group as the bad guys has the potential to become a sore subject. I asked Hay if he was concerned about fans feeling singled out or mocked by this decision. “Not at all. When you meet Mary May, when you meet Pastor Jerome, when you meet Nick, you’re meeting real people, and they’re the ones that are saying this cult doesn’t represent us, that this is not what we believe. You’re actually going around this world and you’re meeting regular people who have regular jobs, who don’t believe in the cult and don’t trust it.”

Some have been questioning the location of Montana, suggesting that the South might have been a better pick, but Hay has nothing but confidence where the setting is concerned. “The reason we picked Montana is because we went there. We wanted to be able to look at history and understand this feeling of the frontier. One of the things I was noticing specifically about the region was that every single time that I talked to somebody, I got the sense that this was a region of America that was not trusting of the government. They had a historical reason to not be trusting of the government; they had built cooperatives on their own, they were there because they wanted to be left alone, because they didn’t want to be f**ked with. I kept hearing this language of people saying, ‘You know what? Screw the government. They’re not gonna help us, we’ll do it ourselves, and God will provide.’ What’s interesting about that language is how powerful it is, and how it can put a lot of people to work. But if a magnetic leader comes in and starts to say, ‘Screw the government, we can do it ourselves, and I will provide,’ then you’ve created something just familiar enough for people to embrace, and it becomes a magnet for crazy.”

I asked Hay what led to the decision to the series to America, and why they decided to build a home-grown threat, rather than using an invading army. “We knew that we wanted to take Far Cry to America, and we didn’t know how. There were some ideas that were kicked around, but it felt like you could see them coming. And we started to talk about the cult, and started to talk about it feeling real, and being local. It’s not a federal thing, it’s something that was intimate. And a family, and people with real jobs, agendas, not heroes. This concept of being able to take America back at the grassroots level was super interesting. I think that people who play the game will get the sense that the cult has real motivations, that they actually believe that there could be a collapse, and that what they’re doing actually makes sense to them.”

The frontier spirit is alive and well in Hope County

When asked what kind of experience he hoped players would walk away from Far Cry 5 with, Hay expressed a hope that players will connect with the world within the game and feel a real connection to the place, that they will feel like this really is a place worth fighting for. “Hope Country is a beautiful place. You fall in love with it, it feels real, and I don’t think we’ve all had the chance to be able to go walk through fields, and touch the wheat, and we just want you to have that experience, if you’ve never had the chance. It’s a beautiful world, and that’s the trick. You make a beautiful world, and then you twist it a little. We’re really hoping that people play it and they feel it, and it just speaks to them.”

Finally, I asked how his time working on this title has impacted him. “I think of things much more in terms of survival,” Hay said as his eyes hardened. “I sometimes wonder, just how long could I survive? Two days? Two weeks? Before I went to Montana I drove a Prius; now I drive a Jeep.”

Far Cry 5 will be available February 27, 2018 on PlayStation 4, Xbox One, Project Scorpio, and Windows PC. The game will feature both solo play and two-player co-op modes. It will also feature a map editor, which will include new features and fan-created content. Keep your eyes out for more information, screenshots and teasers at E3.