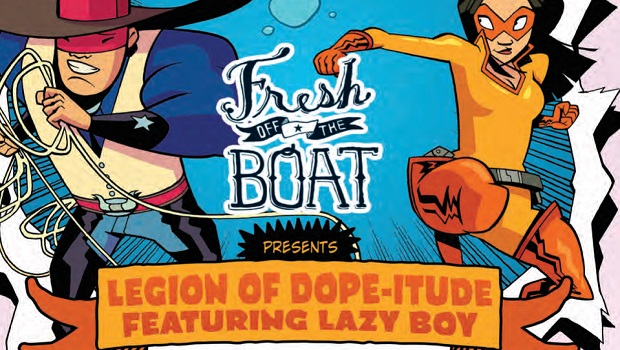 The first Saturday of every May marks one of the biggest traditions in the comic book world: Free Comic Book Day. While publishers releasing special issues for free this weekend isn’t new, Boom! Studios tried something new with one of its offerings. Based on the show of the same name, Fresh Off the Boat Presents: Legion of Dope-itude Featuring Lazy Boy features a drawn version of the main cast as the one-shot issue delves into some all-ages superhero antics.

ABC’s Fresh Off the Boat portrays the life of Asian-American Eddie Huang and his family as they adjust to life in Orlando. In the episode “Pie Vs. Cake”, he and his brother Emery team up to create a comic book for a contest to get it published. The book in question isn’t exactly the same thing, but the comic emulates that style emulated almost perfectly. In it, the Huangs are surprised to find they are suddenly given superpowers which are based on the comic itself.  While we did get to see The Persuader (mother Jessica’s alter ego) and Blazer Boy (brother Emery’s alter ego) in action at the end of the episode, we also get to see Evan’s Nice Man, Louis’ Cattleman, and Eddie’s Lazy Boy as well.
Meanwhile, Eddie tries to come to terms with the fact that his superhero family is more popular than his real one, and wonders what would happen if he were stripped of his newfound celebrity. This “dual-identity” theme is something that is touched upon quite poignantly as Gene Yuen Lang (author of American Born Chinese, one of my all-time favorite graphic novels) works an all-ages script pretty well here. He also does something that I still find hard to do in the main series: make Eddie a developed character. While his boisterous personality is still in full swing, there were moments in the second half of the issue that made me feel sorry for him. For a show that revolves around him, I still consider Eddie my least favorite character of the cast due to his more annoying tendencies and unforgiving attitude for most of any given episode. Lang does a great job with his character arc here, and I’m glad that there are some cool life lessons that we can learn from Eddie’s experiences.

Oddly enough, Legion of Dope-itude works better as a standalone issue than a show tie-in, especially with the superhero motifs present within the pages. The show itself stands firmly at a TV-PG rating while this is more TV-Y7 fare; there is nothing wrong with that, especially since the premise is wackier than most of the show. The cast’s superpowers feel more at home to the Great Lakes Avengers than the mainstay Avengers (Nice Man’s power, for example, is to get people to be so nice that they don’t become evil), but it’s goofy enough to work in comic form. It’s still beneficial to catch up on Fresh Off the Boat before reading this, but it’ll make sense if this is your first exposure to the Huang family.
The art style, for the most part, emulates the cheesy charm of the old silver age of comics. Jorge Corona’s artwork complements Lang’s writing as the characters pop out of panels with distinct coloring techniques. The backgrounds weren’t too detailed, but the character designs more than make up for it. While the action scenes are played for laughs (the only real battle being near the end of the issue), they’re still reminiscent of the kitschy feel of 60s and 70s entertainment.

All in all, Fresh Off the Boat Presents: Legion of Dope-itude Featuring Lazy Boy is a heartwarming family comic book that sheds some light on the (super)human condition, and delivers a few tongue-in-cheek laughs as well. If you’re headed out to your local comic store this Saturday, you should definitely put this on your radar.

Elisha Deogracias is an aspiring accountant by day, freelance writer by night. Before writing for Gaming Trend, he had a small gig on the now defunct Examiner. When not being a third wheel with his best friends on dates or yearning for some closure on Pushing Daisies, he's busy catching up on shonen manga and wacky rhythm games. Mains R.O.B. in Smash. Still doesn't know if he's a kid or a squid.
Related Articles: Beyond the Page, Fresh Off the Boat Presents: Legion of Dope-itude Featuring Lazy Boy
Share
Tweet
Share
Submit