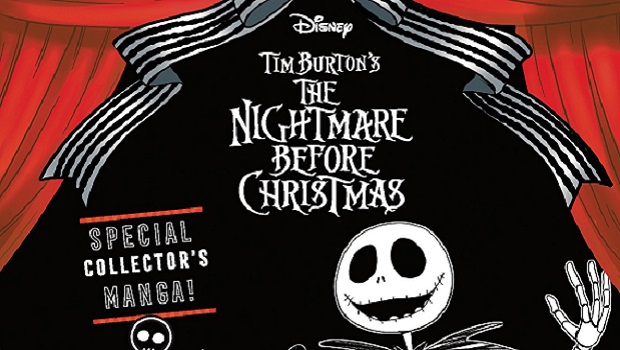 Like every kid at heart, I’ve avidly watched Disney movies growing up, and I’ve seen everything from The Lion King to Chicken Little to Cinderella III. However, if there’s one movie that I’ve evaded over the years, it’s The Nightmare Before Christmas. I’m not sure as to why I haven’t watched it until now, but after delving into it, I can see why it’s considered one of Tim Burton’s best movies. While there have been numerous media adaptations of the movie, perhaps one of the more obscure ones was a manga released in the early 2000s. Tokyopop has released a collector’s edition of this adaptation, and it’s worth a read due to its adherence to the source material and some extra insight into the main characters.

The Nightmare Before Christmas takes place in a location known as Halloween Town, a dastardly setting where the ghouls and undead roam for the whole year, headed by the leader of the pack, Jack Skellington. As the name suggests, the town is responsible for hosting its annual Halloween celebration, filled to the brim with scares and frights. However, after one of these parties, Jack has an existential crisis and tries to find what he is missing. Stumbling across the mysterious Christmas Town, he finds a revival in his holiday spirit as he enlists the town to recreate Christmas, culminating in the kidnapping of Christmas Town’s central figure, “Sandy Claws”. However, what happens when a town that only knows about frightening others tries to emulate a holiday that’s completely the opposite of everything it stands for? And will people accept Halloween Town’s homemade brand of Christmas in time for the holidays?

The Nightmare Before Christmas was known for its Gothic stop motion style, and the art of the manga transitions well. While some of the nuances are lost with character models, for the most part, it feels true to the movie. There’s a certain similarity that the manga style and stop motion animation has that isn’t apparent when you initially read the manga, but it’ll make sense in later pages. While not as horrific as the film at times, the art still evokes a sense of dread when the story needs it. This is apparent with Oogie Boogie, a mysterious boogieman with a penchant for gambling that has some ulterior motives regarding Sandy Claws. However, the manga also displays a juxtaposition of lightheartedness when focusing on more comedic or heartwarming moments, something from which an all-ages manga benefits. An interesting touch I noticed with the script was its handling on musical numbers. When characters break out into song, the text changes font to denote it. It’s a small touch that I found amusing, and I found myself humming to “What’s This?” as I followed along to Jack’s initial Christmas experience.

Like all film adaptations, the manga takes a few creative liberties with the narrative as a whole, specifically truncating some scenes or switching the order of events around. While the beginning feels a bit rushed due to it emphasizing on the Christmas buildup and climax, I did appreciate how it conveyed all the key scenes adequately. Some lesser known characters are given a little screen time, such as the trio of tricksters Lock, Shock, and Barrel, as well as the devious Dr. Finkelstein. Even the character of Sandy Claws gets a few panels to shine.
Additionally, the manga takes advantage of the medium by inserting characters’ inner thoughts and bringing motivations to light within some panels. While the film benefited from audible monologues, the manga inserts some into character interactions, such as Sally (Jack’s love interest) expressing doubt and concern over his sudden change of heart regarding Christmas. It also clarifies some actions that may have been a bit muddy in the original film. The aforementioned switching of events occurs in the climax, and describes a flashback that Jack has when he and Sally are separated. This is different from the film, which puts both events parallel to each other. It helped with the pacing, especially since it makes more sense with the manga’s timeline of events.

Overall, the manga adaptation for The Nightmare Before Christmas is a delight to experience. Whether you’ve been watching it since the original release or just want to check out a new manga to read, this is a marvelous work of whimsy that will charm readers of all ages.

Elisha Deogracias is an aspiring accountant by day, freelance writer by night. Before writing for Gaming Trend, he had a small gig on the now defunct Examiner. When not being a third wheel with his best friends on dates or yearning for some closure on Pushing Daisies, he's busy catching up on shonen manga and wacky rhythm games. Mains R.O.B. in Smash. Still doesn't know if he's a kid or a squid.
Related Articles: Beyond the Page, The Nightmare Before Christmas
Share
Tweet
Share
Submit