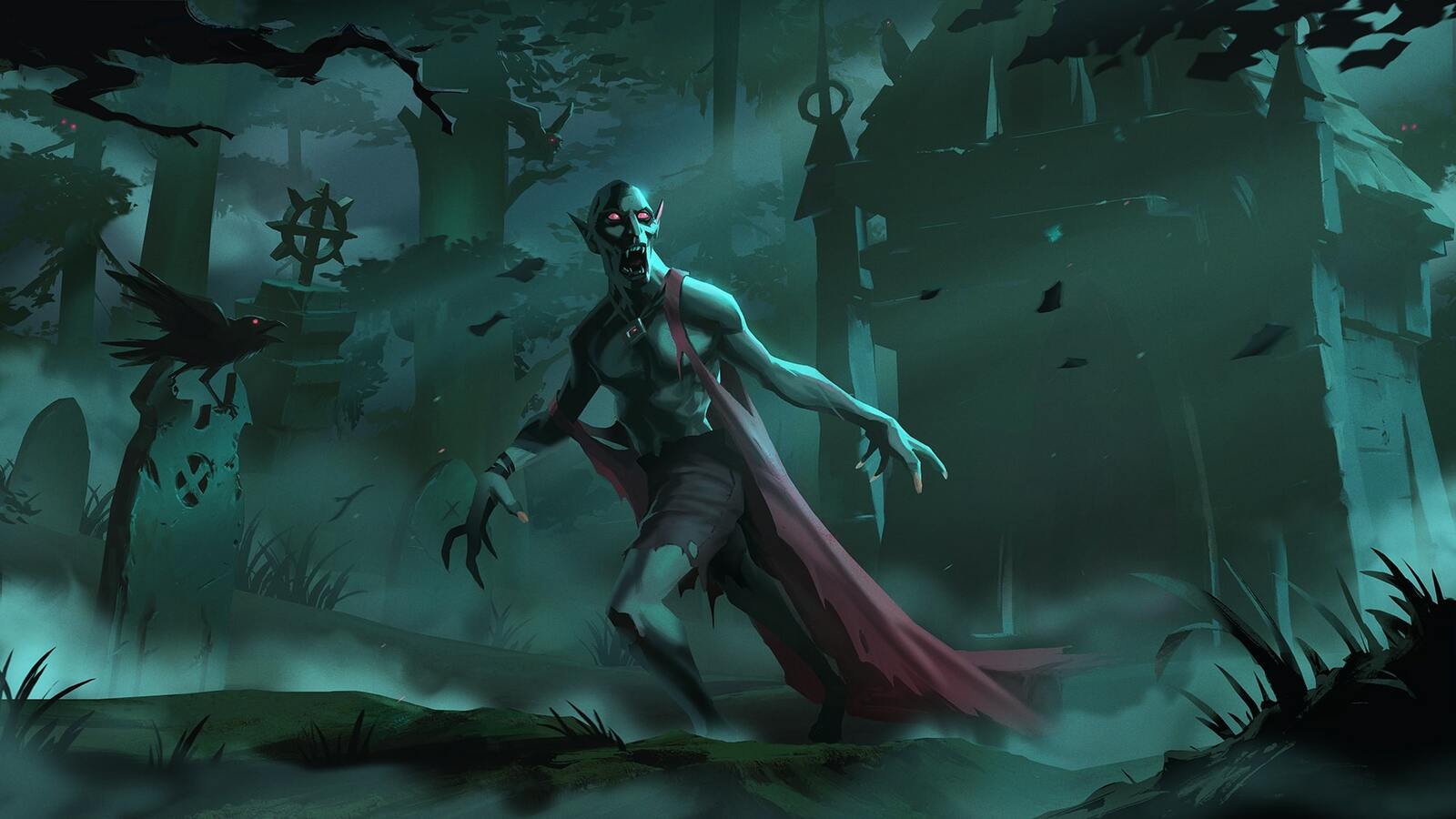 After pouring dozens of hours into Battlerite, I was hotly anticipating Stunlock Studios’ next release. I adored Battlerite, but unfortunately it didn’t see the success it deserved. As a PvP arena battler, the combat was tight and well-balanced, but I suppose they were quite limited with how far they could expand the game, and ultimately people moved on from it pretty quickly.

Thankfully, V Rising is so vast and so deep that I don’t think it will have that problem. As an open world survival game in early access, it’s already got so much content and they’ve clearly designed it to be built upon over time. It’s also an absolute treat to play, and even though I’ve only scratched the surface of what the game offers, I’ve played enough to understand what the game offers to put forward my first impressions.

When you boot up V Rising, you’ll be given a few options. You can choose PvE mode, where you’ll be able to group with players to suck the realm dry, regular PvP mode, full loot PvP mode, and duo PvP mode. In the PvP modes, anybody who isn’t in your clan is fair game. I chose PvE mode for the majority of my time with the game; I was playing solo and didn’t want to get ganged up on by other clans. However, a friend and I did create characters on a PvP server and played for the night, and it was a whole lot of fun. Alas, I’m going to be covering V Rising from a PvE perspective.

Once you’ve selected a game type and a server, it’s time to create your vampire. The character creation tool won’t blow you away, but it’s perfectly functional and there’s good enough customization options to make something unique. Some of the face options are nightmare-fuel, others are hilarious, but if you want to create your very own Dracula, you can do that too.

The game starts in expected fashion; you awaken in a gloomy crypt and head out into the cemetery. You’ll notice that V Rising gives you clear goals in the top left corner; these act as a tutorial and steadily introduce you to the game’s systems and mechanics. Your first task will be to collect bones, and, as you’re already in a cemetery, this won’t prove too difficult. With the bones, you’ll create your first weapons and armour, and then you’ll be introduced to a part of the game you’ll become very familiar with; woodcutting and mining.

Like any survival game, you’ll need to collect resources to build your base and craft new items. In V Rising, you use your left-click to attack, chop, and mine. You can do all of the above without anything equipped, but as you’d expect, equipping an axe will make you more proficient at woodcutting, and, interestingly, a mace will make you a more efficient miner. 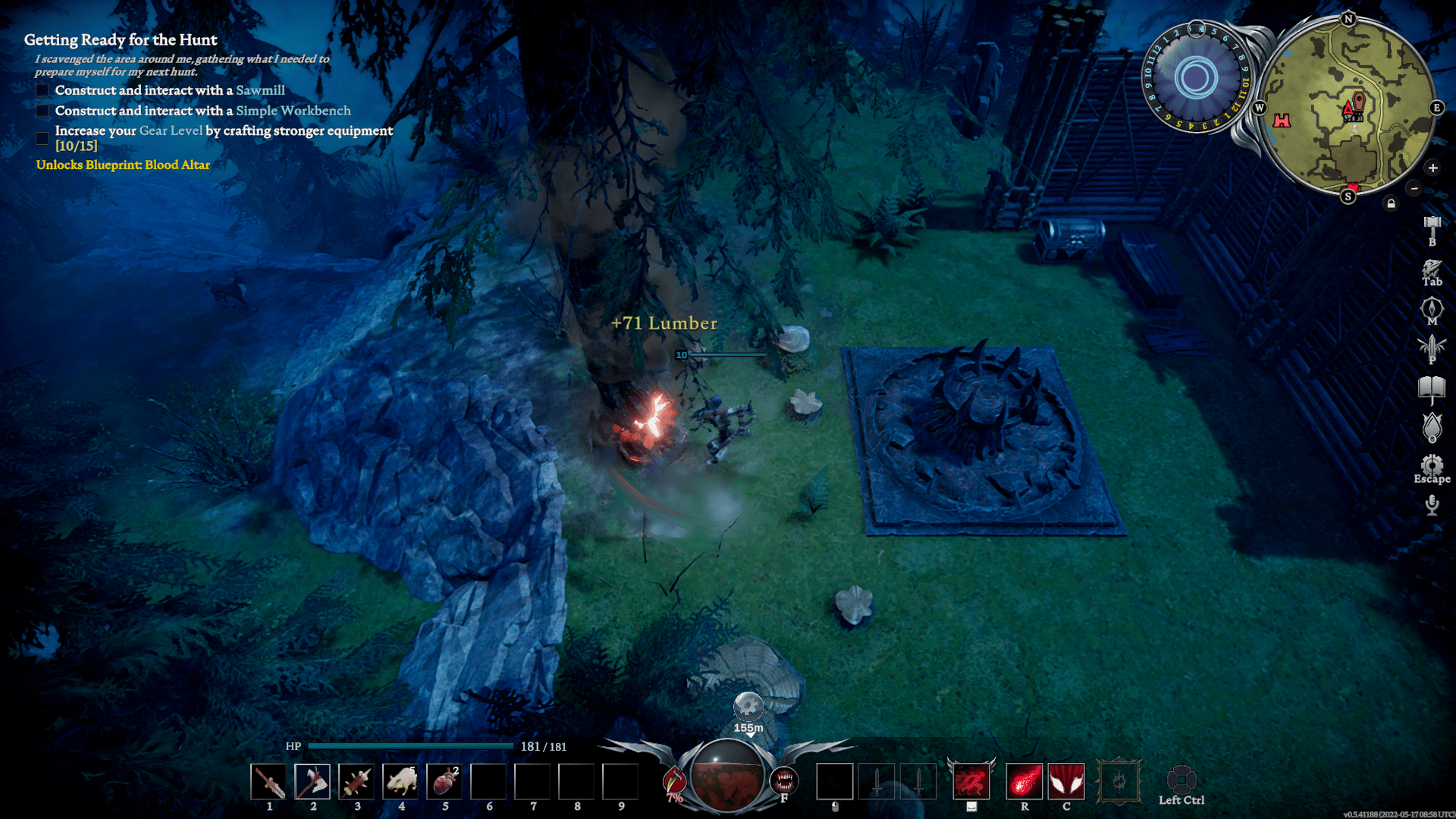 All of this is drip fed to you in the first thirty minutes or so of the game via the top-left tutorial. It’s extremely well-paced, which was welcomed as survival games typically suffer from information overload when you first boot them up.

By now, you’ve probably left the cemetery and ventured into the open-world proper. V Rising’s map is large, split into five different areas. The map is full of points of interest, from mines to bandit camps, caves to crypts, small villages, and so on. I’ve not explored anywhere near the whole map yet, but so far, there isn’t a tonne of diversity between these areas. There’s a good reason for visiting them, though, as these are where many of V Rising’s valuable resources can be found.

It can take a while to get around in the early game, and, well, if you’re travelling by day, you’re going to want to be EXTREMELY careful. If you know the first thing about vampire lore, you’ll know what I mean. That’s right, vampires don’t like sunlight, and stay out in it for more than a few seconds, prepared to start frying. That’s one of V Rising’s most unique and enjoyable mechanics; you need to stick to the shadows if you’re roaming around in daylight. Thankfully, there are plenty of trees around, but getting in a tight spot with enemies during the day means dancing around their attacks while weaving in and out of shady spots. It’s intense, and feels great to play. 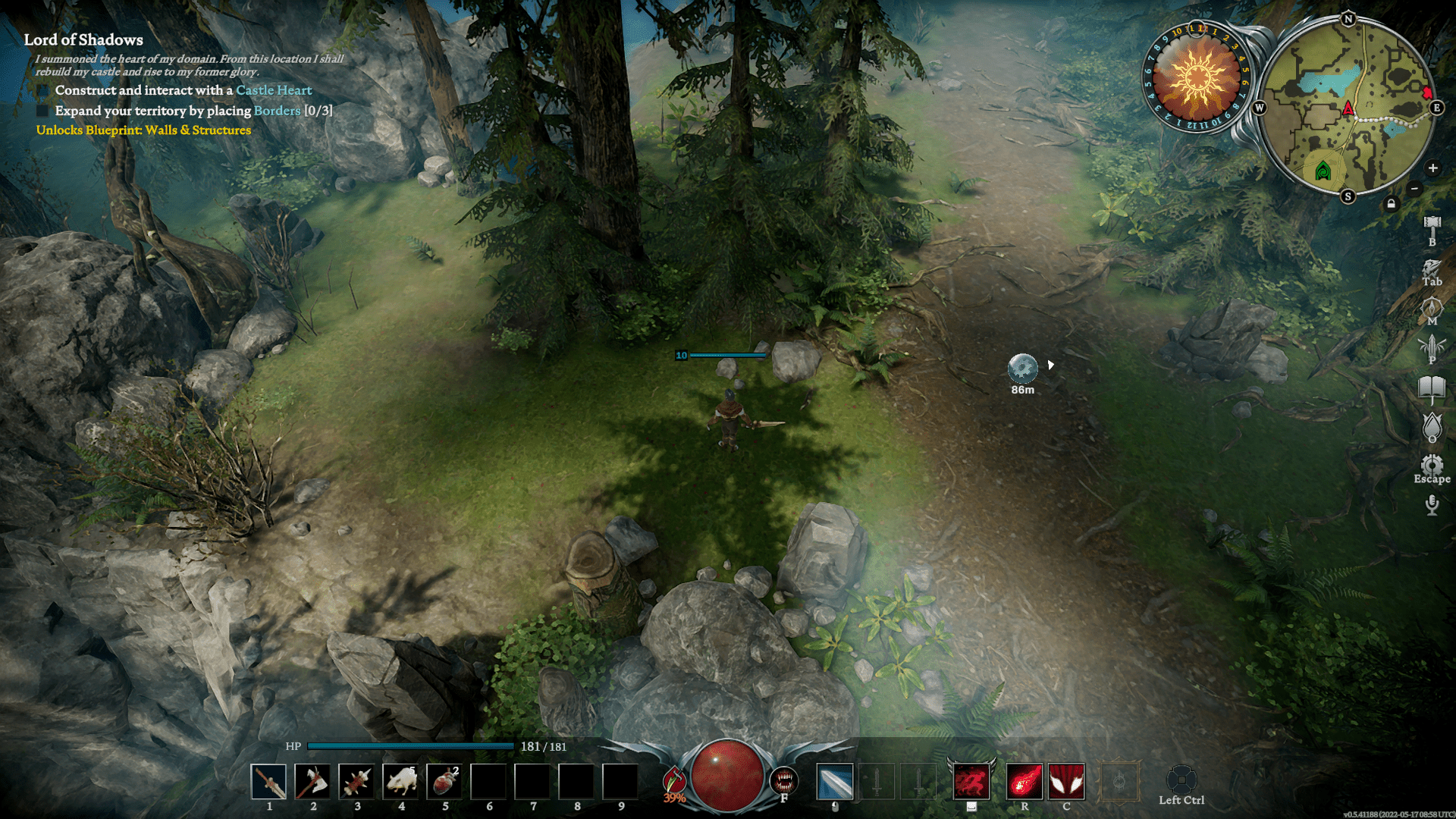 The first thing you’ll want to do when you’re set free in the lands of V Rising is build a base. Now, if you aren’t playing offline or on a fresh server, this might be quite tricky to find a good spot. This, in fact, was my biggest pain point during the opening hours of the game. There aren’t actually that many wide open spaces in the landscape, and if you’re on a busy server, you’ll likely find all the good spots are taken. I spent a good hour looking for somewhere good to build my base, as by the time I was ready to do so, a whole lot of vampires had already moved into the neighbourhood.

There is a system at play that prevents inactive players from taking up real estate space, but as it’s a new game, everyone on my server was pretty active. It’s worth considering if you’re jumping in for the first time; I wouldn’t recommend choosing a super busy server.

Once you’ve found a good spot, with a pocket full of lumber, stone, and blood essence (the resource you get from killing enemies), you can start putting your four walls together. To build a base, you’ll first need to build a castle heart. This essentially acts as your base’s protection; as long as you feed it with blood essence, your walls will be strong. Fail to do so, and your base will be open to attack from other players, even in PvE mode. This is how V Rising prevents inactive players from taking up land, and it actually works extremely well.

Before too long, you’ll have a lovely wooden fort and a few essentials – a work table, saw mill, and forge, to refine your materials. By working through the goals at the top-left, you’ll gradually learn new recipes and begin turning your little wooden fort into the gothic castle of your dreams. Base building is extremely intuitive, thanks both to clever design and the top-down perspective. You’re more restricted than in something like Valheim or Minecraft, but V Rising makes up for that with stress-free and wonk-free base building. 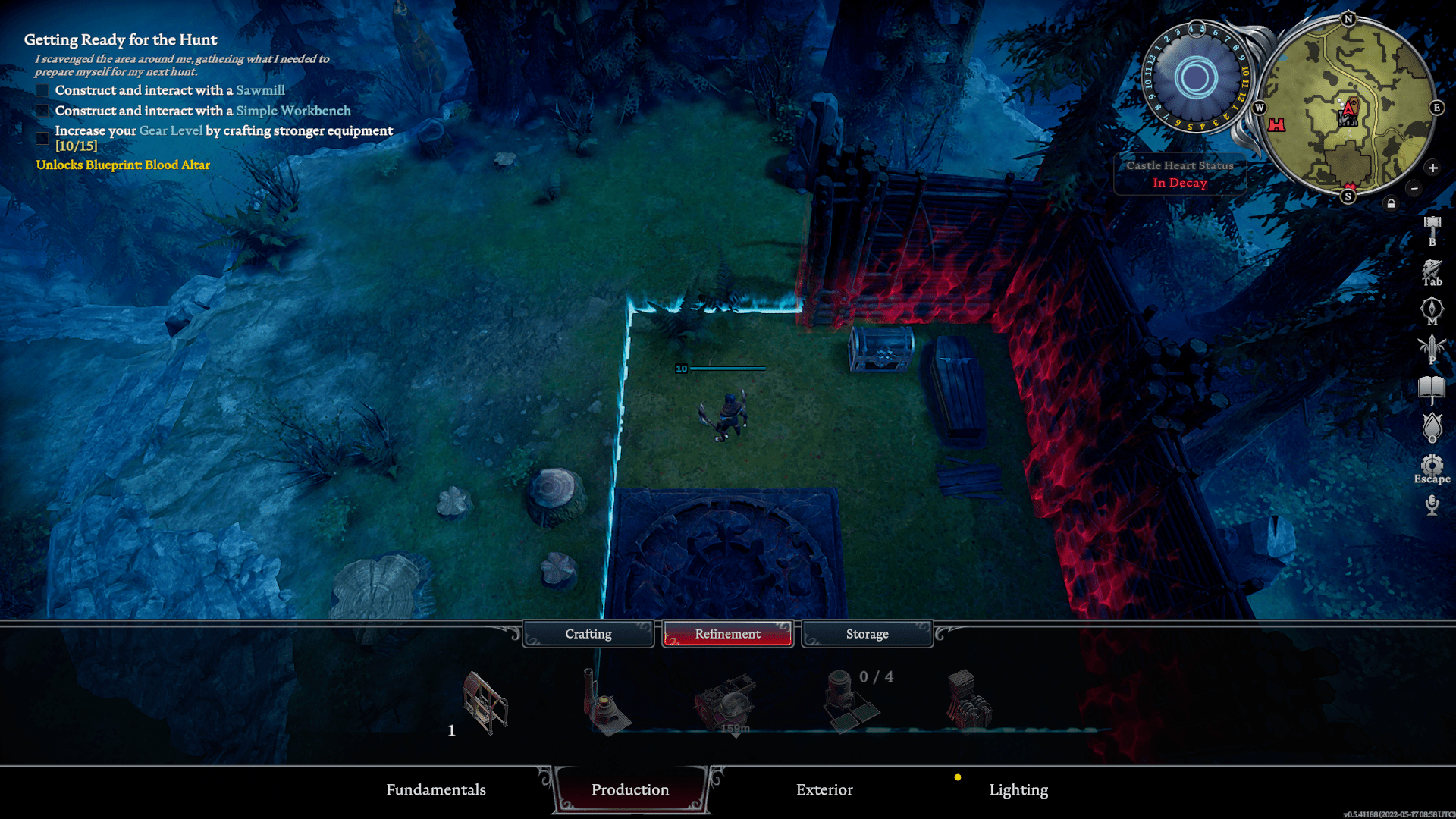 The early things you’ll be building, such as the aforementioned sawmill and forge, are there to serve a clear purpose, but there are plenty of on-theme delights waiting for you that I don’t want to spoil, and I’ve not even unlocked much of what the game has to offer.

Exploring the world and farming resources to build your base is fun, just be prepared to do A LOT of it. You’ll quickly find that you need a ton of resources to keep progressing, arguably a little too many. This is made worse by the fact that resources take a long time to refine, so it helps to have a plan in your head of what you’re going to do for the next twenty minutes while your saw mill turns a few thousand logs into planks. Thankfully, I don’t mind the grind (I spent a large amount of my childhood playing runescape), and chances are, if you’re into survival games, you won’t mind either. Just be aware of it.

To wrap up these first impressions, we need to talk about combat. V Rising has, by far, the best combat out of any survival game I’ve played. I guess you’d expect that from the developers behind Battlerite. It certainly borrows from Battlerite and MOBAs, but that’s okay. You’ll gradually unlock new abilities by taking down the world’s many bosses, and you can mix and match them as you see fit. The majority of the abilities I’ve unlocked are skillshot based, and have fantastic spell effects to go along with them. 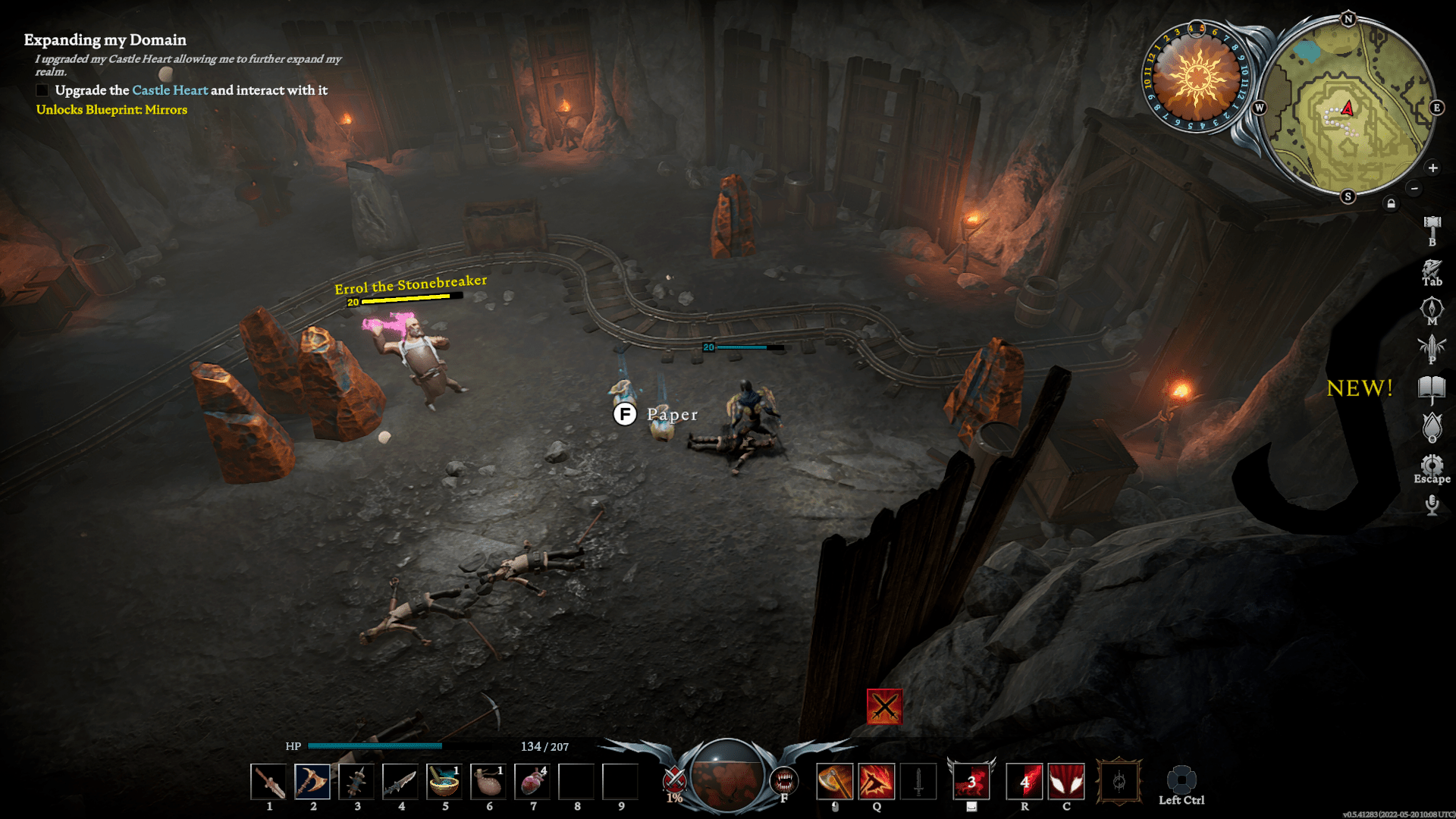 While many of the earlier enemies aren’t much more than fodder, it’s the bosses where the combat truly shines. This is thanks to both the combat itself as well as the expertly designed bosses. Each boss I’ve hunted and taken on so far has felt challenging and unique, but you’re always rewarded greatly for your efforts. Whether it’s for a new ability or new crafting recipes, these bosses just feel great to take down. I’m really interested to see what’s in store with the late-game bosses.

My first impressions of V Rising are extremely positive. In fact, with its polished, virtually bug-free state, and the sheer amount of content on offer, I genuinely can’t believe it’s the first build of an early access title. I’d go so far as to say that there’s more on offer here than a good chunk of AAA full-priced titles releasing at the moment. Go and check it out, and check back here soon for a full review.

Kristian (or Kris for short) is a copywriter by day, button presser by night. Based in the UK, Kris loves any game that allows him to swing a sword, fire an arrow, or sling a ball of fire, but ultimately he's not too fussy. On the rare occasion Kris isn't writing or gaming, you'll probably find him in the bath with a good book.
Related Articles: V Rising
Share
Tweet
Share
Submit