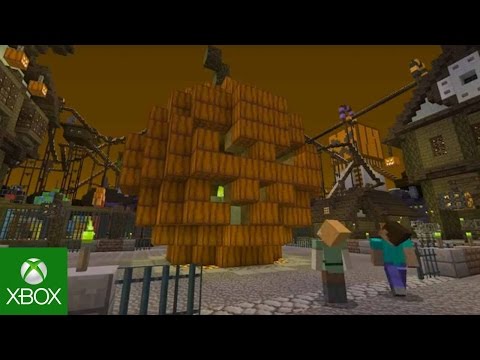 There are a staggering amount of low-res, randomly generated game worlds that get played out there, more than I care to imagine. At last count of all platforms, the combined copies of Minecraft have sold at over 70 million – that’s a lot of cubes of wood being chopped.

Just in time for All Hallow’s Eve, Mojang’s creative team have released the Halloween Mashup Pack, which includes a spooky texture pack, 43 player skins and themed music to go with it. I’m not the Minecrafter in the house, nor do I have any direct interest in it. My 11-year-old son, however, is obsessed with the game – I only ever play it to placate his gaming interests and serve generally as a worker bee, following along while he runs around architecting new things.

Since this is a mashup pack, you can actually start a new game in their own Halloween world – and if there was a reason to drop $3.99USD, then this is it. Secret passages, a haunted-house-style roller-coaster that spans most of the world and a real attention to detail will have you saying “Ooo, look!” From lonely vampire castles nestled on mountaintops in the clouds to a carnival town where nothing is as it seems, the experience of riding the rails and taking in the unfathomable attention to detail they went to in this world makes me glad to have played it.

In the mashup world included, while I wandered around awestruck at how many hours it would have taken to create just the first gravestone which is the size of a skyscraper, he began deconstructing and absorbing the design ideas presented within. By the time I managed to get back to the starting town, he’d already redesigned a building to his liking and had started work on repurposing a second one.

On Windows and mobile platforms there is a skins pack for $1.99. However, there is a magic in the console addon that if you’re a fan, you will likely appreciate. It isn’t just music and textures and a boat-load of player skins (as impressive as they may be), the crafted world is worth the extra couple dollars to get the full experience.

It even got me to fire it up while my son wasn’t around. Now *that* is an accomplishment.

Born and raised in Winnipeg, Canada, at a young age I was forced to decide whether the harsh northern winters were going to claim my fingers, or to turn to the safer pursuits of indoor activities. Little did I know that a little game called Ninja Gaiden would bring my digits more pain than frostbite ever could. Starting with Vectrex and C64 games and moving forward through the era of electronic entertainment, I sampled as much as I could in the different platforms, and began my interest in PC gaming from wrestling with DOS memory management. While console games were a part of my earliest gaming memories and I certainly had played on most platforms including 3D0, all things Nintendo, PS1 and the like, truly the PC was my domain until the Xbox. As an old PC gamer, I ever chased the cutting edge technology. Eye of the beholder with CGA 4 colors was my first step down the the path of blowing thousands of dollars on PC upgrades over two decades. Ultima 7, with the Guardian talking to me through my monitor, still haunts my dreams and keeps me ever hoping for a decent Ultima 8 and 9. From the 3DFX SLI VooDoo2s and Aureal to today's GPU driven DirectX games, the new and shiny pictures seem to keep me going. My PC gaming has slowed down with the market shift though, and although I have choice games that will ever be on PC, I have found myself in console gaming with a bit of portable gaming in my life. Back around the turn of the millenium (and long before fatherhood), I had fired off an email offering to help Ron with a little-known site called ConsoleGold. Little did I know it would be be a part of my life to this day. While I've seen my fair share of shovelware (thanks Ron!), I manage to try and find the fun in most games. Leaning towards sandbox and action titles, I've grown to love games for their potential to reach art. Console agnostic and excited for the progress of tomorrow, I fancy the latest and greatest, but still enjoy the good old classics ... as long as they've been revamped from their 8bit graphic roots.
Related Articles: Minecraft
Share
Tweet
Share
Submit