The original Predator film was released back in 1987, introducing us to not only the titular Predator, but also the elite mercenary Dutch, who was played by Arnold Schwarzenegger. Dutch has seemingly been one of the only people who has ever been a match for the Predator, and even managed to kill it during their encounter. So who better to show up in Predator: Hunting Grounds’ first DLC than Dutch? 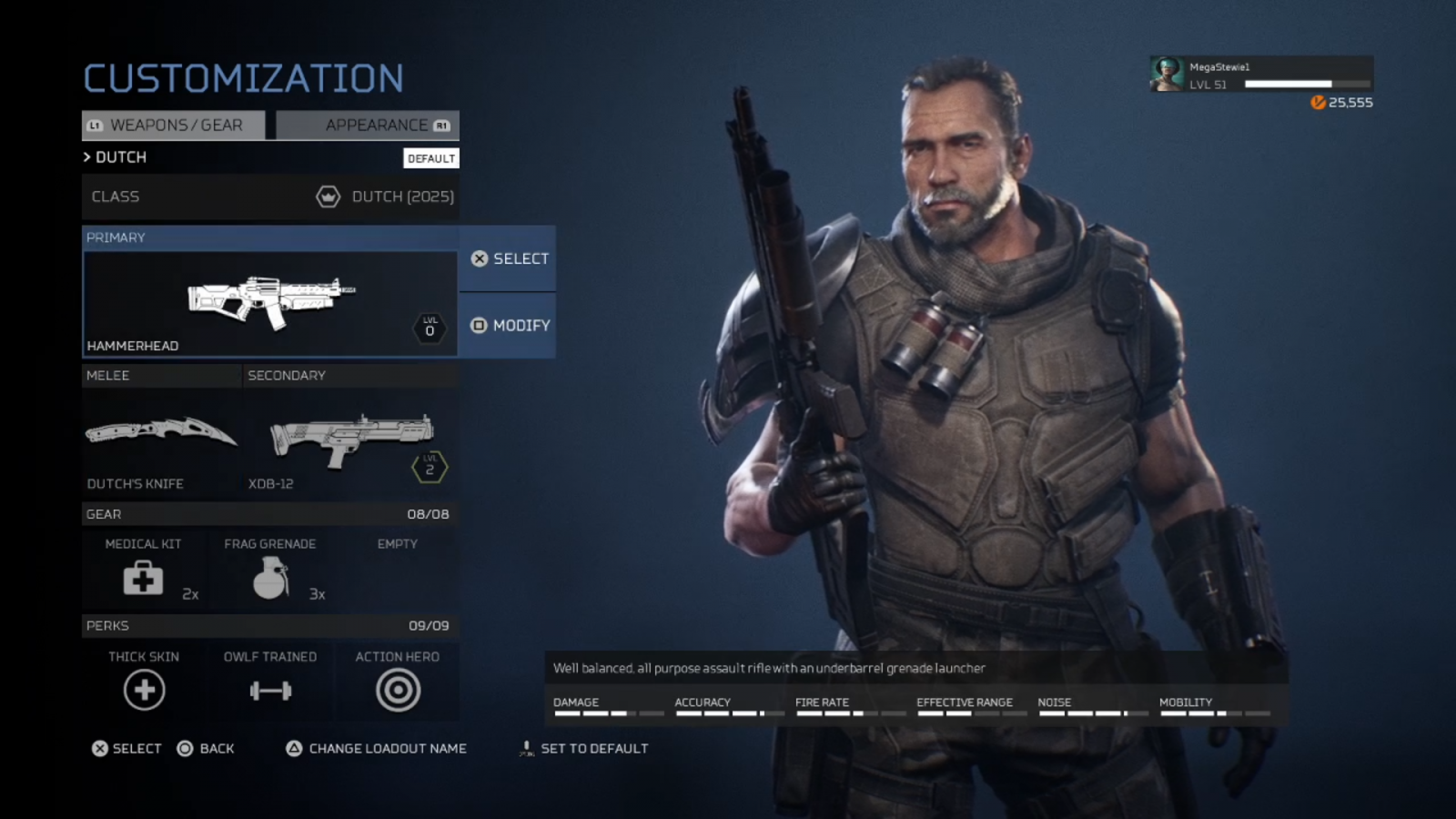 In this first paid DLC for Predator: Hunting Grounds, we get access to Dutch, who appears as his own class alongside the others such as assault and recon. He has some really good stats, clocking in slightly above 3/4 max health, exactly 3/4 max stamina and max movement speed, and 2.5/4 max gear. In other words, Dutch easily proves that he’s got the qualities of a soldier. His personal bonuses are an increase in hip accuracy and a longer mud cover duration, which definitely fit his character.

Now, instead of bringing Dutch back as his younger self from the 1987 film, the developers decided to show off an older, more experienced version of him. The year is 2025, and it’s clear that Dutch has been through more than his fair share of battles and fights to the death. For anyone that’s seen Arnold Schwarzenegger lately, you’ll immediately notice the resemblance. I love his look, and it’s great seeing him back in his element. You know what makes Dutch even better here? The fact that Arnold himself came in to do all the voice work; no impressions here, we get the real deal. And before you ask, yes, he does say “get to the chopper.” 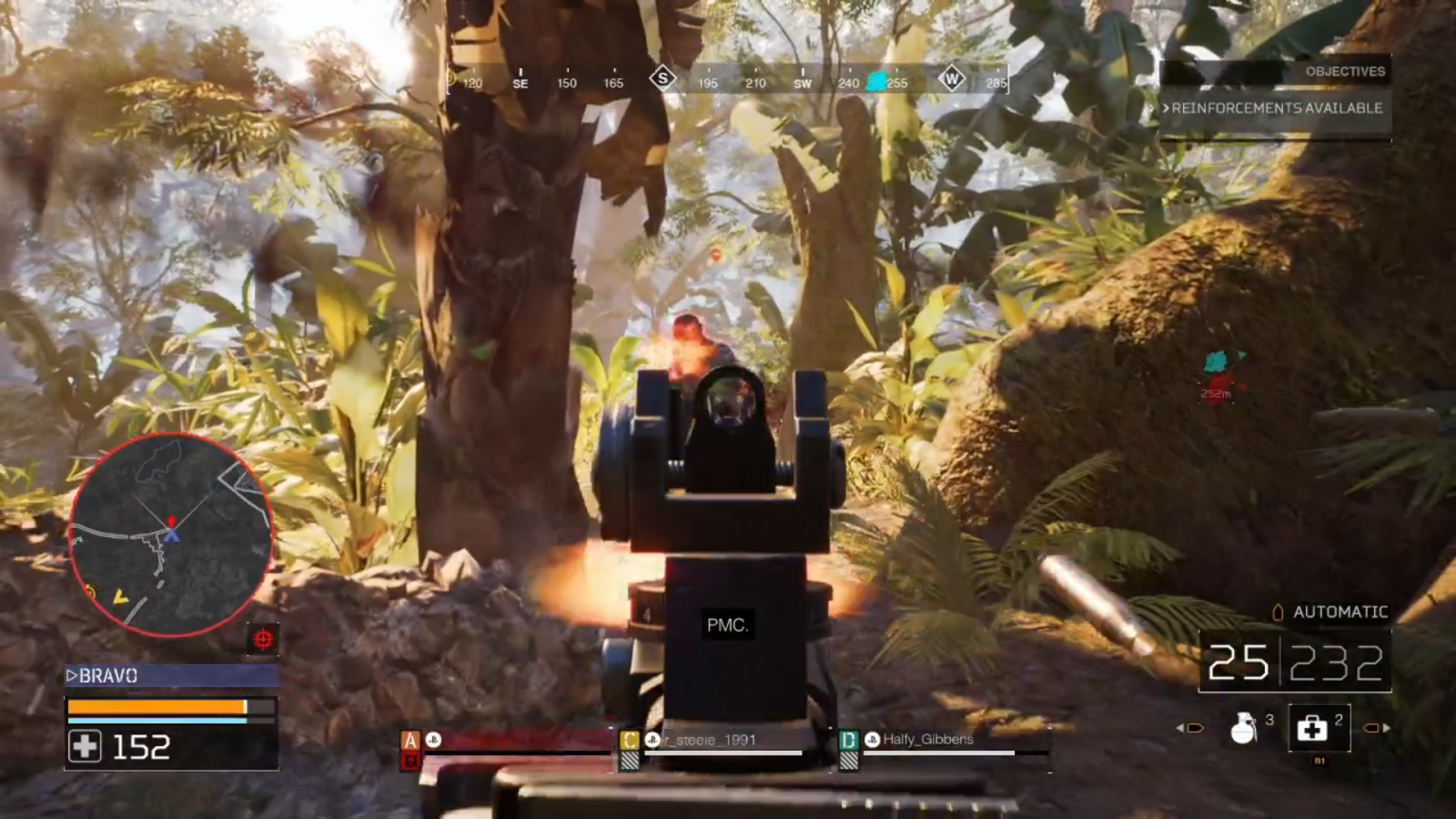 As cool as it is just having Arnold back as Dutch, we need to get to the best parts of his inclusion: his weapons. Buying Dutch gives you early access to his QR5 Hammerhead assault rifle and his serrated knife. I believe the knife acts more or less like the standard knife in the game, but you have to admit that it looks pretty cool. He took the serrated blade from the gauntlet of a dead Predator and made it into a knife of his own. The Hammerhead is the true champion here though. At first it may not seem all that special since it’s basically just a well-balanced assault rifle with no real faults to it, but you’d be wrong. In addition to the 2.5/4 damage output, the 3.25/4 accuracy, the 2.5/4 fire rate, 2/4 effective range, 3.25/4 noise, and 2.5/4 mobility, it also has a grenade launcher outfitted in the underbarrel. Believe me when I say this baby dishes out some damage; if you don’t want to take my word, you can see for yourself in the video above.

At the start of a match, the launcher comes loaded with ten grenades, but you can restock with ammo bags or ammo crates. You can only hip fire with it, but that won’t hinder you in any way, especially with Dutch’s increased hip fire accuracy. The best part is that instead of landing and exploding a few seconds later like regular grenades, they explode on contact, damaging anything in their radius. I’ve sent a few Predators running, and plenty of soldiers flying with these grenades. My one issue is that I can see the potential of these becoming too powerful. For example, if a four man squad all let loose on a Predator with this grenade launcher, I’m not sure how long the Predator would survive. I’m not saying they would be wiped out instantly, but they’d take a beating for sure if they couldn’t dodge fast enough. I’m definitely glad that the Hammerhead exists, but I won’t shy away from its potential to become a Predator’s overwhelming nightmare. 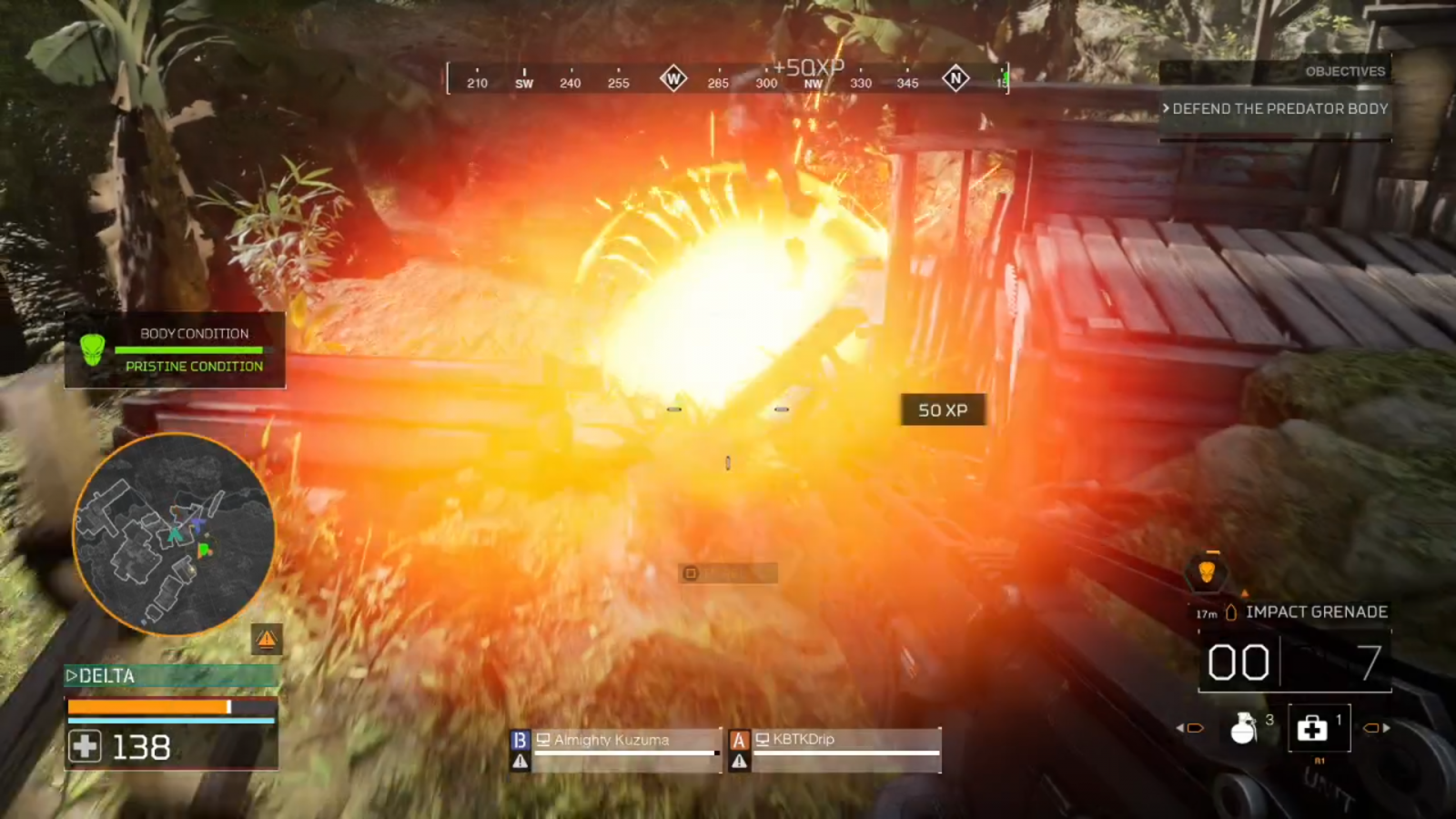 I mentioned that you get access to the Hammerhead rifle and Dutch’s knife in his DLC pack, but I want to point out that the rest of the players will gain access to these weapons in late June, even if they didn’t purchase this DLC. This pack offers those as exclusives for a month, but Dutch as a playable character will still stay locked to those who paid for him. Speaking of paying, the Dutch 2025 Pack DLC costs $6.99, which isn’t that bad if you play the game a lot. I’m not sure if I would’ve bought it on my own, but there are some people who would. You get some nice weapons and the chance to hear Arnold Schwarzenegger in your headphones, so it’s up to you. It’s very cool having Dutch available as you attempt to complete missions and fight off the Predator. Either way, Dutch has been through a lot, and it doesn’t look like he’s stopping anytime soon.

Codi loves to play video games and watch movies. He will watch almost any kind of movie just to experience them. His ideas take inspiration from the shows and movies he watches, and games he plays. He also loves a good pun.
Related Articles: Predator: Hunting Grounds
Share
Tweet
Share
Submit