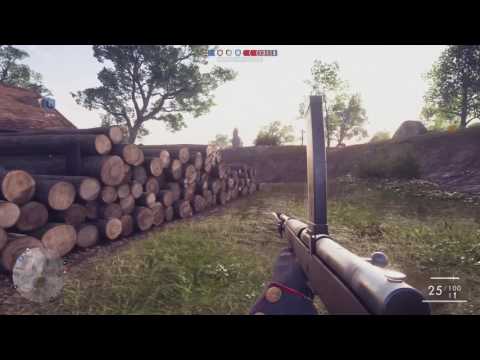 When Battlefield 1 released last October to great critical acclaim (see our review here), it included playable forces from the nations of Germany, the Austro-Hungarian Empire, the Ottoman Empire, the United Kingdom and its associated Commonwealth countries, Italy, and the United States. Despite having a decent amount of content and countries available, there were some extremely significant omissions, perhaps the most notable of which were France and Russia (guess who’s showing up in In the Name of the Tsar).

For those who have waited (and grumbled) to see the French army join the fray, the time has come for rejoicing—the French are finally marching to war. Battlefield 1’s first expansion, They Shall Not Pass, drops tomorrow, March 14, for Premium Pass holders, and on March 28 for everyone else.

This expansion brings with it a bevy of new content. The French soldiers, clad in their distinctive blue uniforms, will storm the Western Front with a new game mode called Frontlines, new weapons, new vehicles, a new Elite class, and four new maps.

Battlefield 1: They Shall Not Pass - Operations on Rupture [Gaming Trend]

If you’re a Conquest junkie, a Rush player, or a fan of both, you’re going to love DICE’s newest multiplayer mode.

Frontlines is yet another great addition to Battlefield 1’s addictive multiplayer scene. It draws on elements from popular modes Conquest and Rush, but still feels unique enough to stand on its own. When a Frontlines match begins, both teams must grapple for control of three points—that’s the Conquest bit. Should one team capture and hold those three points, it must then advance into the enemy’s territory, activate two telegraph posts, and successfully detonate them for a win—that’s the Rush portion. Should a team fail to destroy the two telegraph posts, they are then pushed back into the center and both teams must again wrestle for control of the three main points. DICE likes to refer to Frontlines as a game of tug-of-war due to the typical push-pull of advancing, defending, advancing, and defending until one side is defeated. This back and forth mechanic injects extra intensity to each match and works fantastically well, making an already amazing set of multiplayer modes even stronger.

As the French veterans of the Western Front hit the trenches, they bring with them an arsenal of new weaponry.

Unmistakable with its signature, slow, chug-chug-chug rate of fire, the iconic Chauchat light machine gun finally gets its Battlefield 1 debut. Along with it comes a new assault class weapon, the Ribeyrolles 1918; a powerful semi-automatic rifle, the RSC 1917; a new recon class rifle, the Lebel Model 1886; the Sjögren Inertial shotgun, and the MLE 1903 Extended pistol. All of the new French firearms feel distinct and balanced. Although I was never able to have much success with them, my opponents certainly didn’t share my shortcomings. Still, it’s hard to argue with more selection and content.

The craters just add to the majestic beauty of the French countryside, don’t they?

Of course, it simply wouldn’t do to just add new guns.

Two new vehicles, the St. Chamond assault tank and the Char 2C, will be rolling onto consoles and PC’s worldwide. The St. Chamond, vaguely resembling a large steel box with pointy stick out the front, is heavily armored, making it well suited to navigate the dangerous open spaces between emplacements and labyrinthian trench systems. Considered a super-heavy tank, France’s Char 2C is this expansion’s new behemoth, and just as with the others, it can wreak more than enough havoc to tip the balance of power.

Similar to their mechanized cousins, the new trench raider elite class and massive siege howitzer are meant to bring the pain. While the trench raider focuses on smashing face and lobbing grenades, the siege howitzer delivers devastating artillery strikes, although operating it does make you quite vulnerable.

Battlefield 1: They Shall Not Pass - Operations on Fort de Vaux [Gaming Trend]

Of the four new maps shipping with They Shall Not Pass—Verdun Heights, Fort de Vaux, Soissons, and Rupture—Fort de Vaux is the obvious highlight. It combines the frantic and fast-paced intensity of close quarters battle with the more typical trench warfare that fans have grown accustomed to. Battlefield 4 players who enjoyed Operation Metro will be right at home in Fort de Vaux. Perhaps even more than the existing St. Quentin Scar map, Verdun Heights, with its burning, apocalyptic landscape, serves as a grim reminder of the horrific destruction caused by all-out warfare. Both Soissons and Rupture are set in beautiful countryside, the kind that would be worthy of postcards. Rupture, in particular, bears special significance with its striking fields of symbolic red poppies (the poppy is a symbol of fallen combatants).

Battlefield 1’s first expansion brings many welcome additions to what is undeniably one of the best shooters on the market. The French Army has an unmistakable aesthetic and a clear tendency towards heavy vehicles and heavy weaponry designed for a single purpose—to assault the enemy frontline. DICE has delivered again; They Shall Not Pass was worth the wait. So fix your bayonets, people, because this one is bloody good.