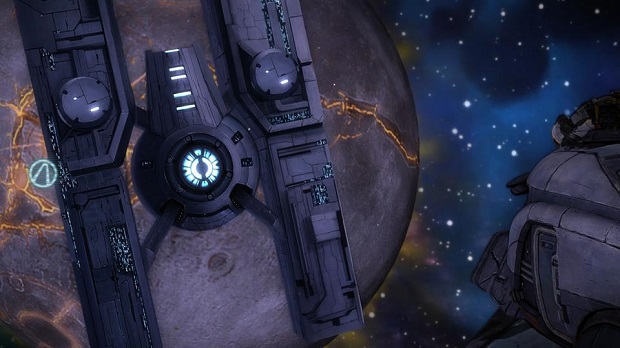 [UPDATE: After discussing the latest episode of Tales from the Borderlands, we were made aware that “Escape Plan Bravo” actually contains an ending separate to the one we got when playing the game for review. The issue was that of the two ways the episode could end, one of them was achievable by two means, and it appeared that was the only way the episode could possibly conclude after two playthroughs, and it had a major effect on our review. But now that we’ve seen this second ending, we no longer feel that some sections of this review accurately convey our thoughts on the episode. Despite a few shortcomings in terms of meaningful choice throughout, “Escape Plan Bravo” is a great penultimate episode for Tales from the Borderlands, and we’re excited for the game’s finale coming out later this year.]

[The following is part four of our ongoing impressions of Tales from the Borderlands. Check out our thoughts on episode three, “Catch a Ride,” here]

“Escape Plan Bravo” left me with a sinking feeling in my gut that the comedic series had yet to really leave me with prior, and it came from some of the most emotional and dark moments the series has offered thus far. Rhys and Fiona’s trip back to the Hyperion base of Helios was filled with the hilarious moments, fun homages to the source material, and outlandish set pieces that fit the often-absurd tone of the Borderlands series that I’d come to expect in my time in Pandora. However, there’s a core theme running through the veins of this episode, and it makes for some of the most affecting moments in the series: Loyalty.

“Escape Plan Bravo” shows that loyalty is often hard to come by in Pandora, and when it’s found it can often have deadly consequences. Both Rhys and Fiona see two opposite ends of the spectrum when it comes to people they put their faith in while on Helios, and it’s hard to say that either is a particularly heartwarming revelation,

After their defeat at the hands of Vallory at the end of “Catch a Ride,” Rhys and Fiona are forced to infiltrate Helios in search of a missing piece of Gortys, the Atlas robot that will lead them to a Vault. Accompanied by some of Vallory’s henchman and the ever-lovable mechanic Scooter, the group makes their way through Pandora’s atmosphere and into the halls of Handsome Jack’s kingdom.

Jack, who is still inhabiting the brain of Rhys, returns to the spotlight in “Escape Plan Bravo” with his and Rhys’ relationship being at the forefront during the infiltration mission. How Jack and Rhys interact is based on how players chose to handle him and his plans in past episodes, . “Escape Plan Bravo” sees the culmination of all Rhys and Jack’s time together, and whether players have chosen to put their trust in the Hyperion dictator will leave Rhys in one of two very different situations.

Outside of Handsome Jack’s plotline, a sense of inevitability is unfortunately present in most of “Escape Plan Bravo.” There’s little in the way of meaningful choice in this episode, as it feels as if it’s being dragged to its conclusion with minimal concern for what’s actually going on at any given moment. Certain problems seem to be fixable regardless of what choices you make, even if your actions don’t seem to be actually helpful or even connected to the situation at hand.

Even with the on-rails nature of the episode, Tales from the Borderlands continues to deliver on great character moments and excellent dialogue. Jack is still a show-stealer in “Escape Plan Bravo,” and though he and Gortys seem to be switching places as the most memorable character in each episode, both of them get spotlight this time around.

Conversely, Fiona’s interactions with Scooter make for some excellent scenes as well. Scooter is clearly harboring an endearing crush on Fiona, and players even have an opportunity to reciprocate should they feel inclined. While some of these scenes may have felt less like they were for Fiona’s benefit than they were for Scooter’s, Telltale’s handling of Borderlands’ mechanic proves all the more telling of his character than almost anything from Borderlands proper ever did.

Given the secretive nature of the group’s actions on Helios, “Escape Plan Bravo” is light on action sequences, but the ones that it has are memorable even if the most elaborate of them comes off like amusing padding. Instead, most of the episode is dialogue-driven while Rhys and Fiona attempt to maintain their cover throughout the Hyperion base. Moments like Fiona’s masquerading as a Helios tour guide and Rhys’ attempt to maintain his disguise due to his wanted status are all entertaining, but there’s still little of consequence to be found in most of them.

“Escape Plan Bravo” feels like it mostly exists to set things up for Tales from the Borderlands’ finale. Despite the whimsy and laughter I’d come to expect from the series, much of the episode was filled with dark moments of betrayal

[Amended final thoughts: “Escape Plan Bravo” doesn’t have quite the level of meaningful choice the series has been known for, but when the choices are there, they’re affecting and leave you ready to see how it will all conclude. Tales from the Borderlands continues to outshine Telltale’s other offerings, and remains high on the Gaming Trend staff’s list of Game of the Year contenders.]