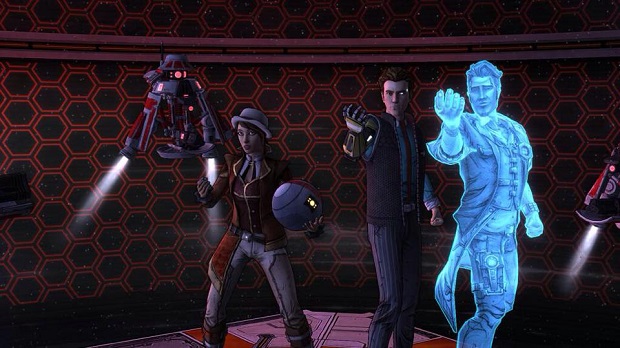 [The following is part three of our ongoing impressions of Tales from the Borderlands. Check out our thoughts on episode two, “Atlas Mugged,” here.]

As someone who has been beating the drum for Tales from the Borderlands since it began back in November, it’s a great feeling to say that each subsequent episode has been even better than the last. Episode 3 “Catch a Ride” continues this trend as TellTale masterfully adapts its formula to the Borderlands world.

“Catch a Ride” picks up immediately after “Atlas Mugged” when Rhys has to make a choice between trusting co-protagonist Fiona or Handsome Jack, the Hyperion dictator who is inhabiting Rhys’ brain through his mechanical wiring.

Depending on whom you chose to trust at the end of the last episode, “Catch a Ride” opens with one of two very different sequences, and your decision to put your life in the hands of Jack informs how he and Rhys interact with one another throughout the episode.

Jack, who dominated Episode 2, takes a back seat role in “Catch a Ride,” but TellTale is clearly planting the seeds for his relationship with Rhys to come to a head very soon. While his presence is more minimal than I would have liked, Jack makes the most of his screen time, and his interactions are shaped by whether or not you are trusting of him.

Even with Jack staying in the background, a new character named Gortys more than makes up for his relative absence. This Atlas robot, voiced by the excellent Ashley Johnson, is perhaps the most endearing character of Tales from the Borderlands’ ever-growing cast, if not the Borderlands series as a whole. Johnson’s cheerful delivery is a far cry from her role as Ellie in The Last of Us, but Gortys instills a charm in a cast full of criminals that makes her one of the most lovable characters TellTale has ever written. Gortys’ role is central to Tales from the Borderlands, meaning we’re likely going to be hearing more of Johnson’s wonderful performance in the coming episodes. This is because Gortys is acting as Rhys and Fiona’s guide to a Vault, which seems to be the goal of pretty much everyone on Pandora, as a plethora of new characters are brought into the fold and the bigger picture becomes more clear.

The cast of Tales from the Borderlands expands pretty substantially in “Catch a Ride,” as a new villain named Vallory is introduced and established character Athena becomes more prominent. Athena in particular comes into her own in this episode as she takes on the role of Fiona’s mentor. She and Fiona learn a lot from each other in “Catch a Ride,” and it makes me wonder if Fiona’s role could be expanded into mainline Borderlands titles outside of TellTale’s adventure series.

Despite playing through Tales from the Borderlands as Rhys and Fiona, the game feels more like an ensemble story than it feels like it’s exclusively about the two playable characters. Even with a cast this large, everyone has a moment and new connections and relationships are established. Standouts include a heart-to-heart between Rhys and Vaughn and a segment where the player has the option to express romantic interest in a member of the cast. As this group begins to trust each other more we’re seeing sides of these characters we didn’t initially. These moments of vulnerability and humility are just as affecting as the game’s humor is hilarious. TellTale is striking a great balance between its black humor and meaningful character development that makes Borderlands feel like the most well-rounded story the studio has told.

“Catch a Ride” also makes TellTale’s QTE-driven action sequences feel fresher by providing the most entertaining ones the studio has churned out. Borderlands is the least-grounded world that TellTale has had to work with, meaning that the action reaches wonderfully absurd heights.

TellTale has added another layer of depth to the action sequences by utilizing Borderlands’ established elemental types to make combat scenarios more interesting. It’s no longer as simple as hitting a prompt, as players now have to pay attention to their surroundings and use proper elements or face dire consequences. TellTale’s continued use of Borderlands’ established mechanics helps differentiate this series from the likes of Game of Thrones and The Walking Dead, and gives a distinct feel to Tales from the Borderlands that nothing else from the studio can match up to.

“Catch a Ride” continues Tales from the Borderlands’ ascent to the top of TellTale’s offerings, and it comes from its ability to stand out against its darker brethren. The addition of characters like Gortys and TellTale’s successful adaptation of established concepts and characters to its own formula are why Tales from the Borderlands keeps sticking with me when I’m not holding a controller, while series like The Walking Dead and Game of Thrones only cross my mind during the couple of hours it takes for me to finish any given episode.

The wait between “Atlas Mugged” and “Catch a Ride” was much smaller than the last gap, and I can only hope that we see Episode 4, “Escape Plan Bravo,” come just as quickly. With Tales from the Borderlands TellTale is telling my favorite Borderlands story, and I can’t wait to see what happens next.