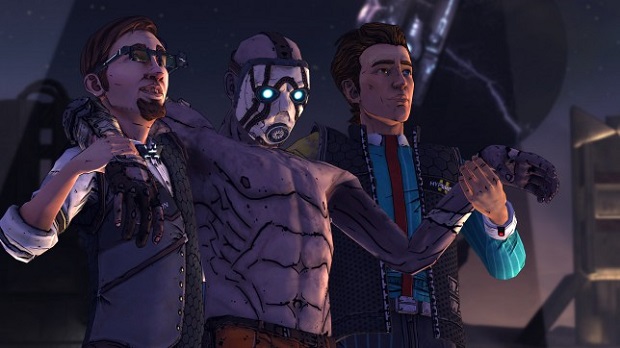 More than anything else, the thing that stuck out to me most in the first episode of Tales from the Borderlands is that the game actually functions. Having played both TellTale’s The Walking Dead and The Wolf Among Us on PlayStation 3, I fully expected the studio’s take on the Borderlands franchise to suffer from the studio’s trademark stuttering and freezing, only to find that the jump to PlayStation 4 has done wonders for the game’s engine.

Tales from the Borderlands is the first game from TellTale I’ve played that didn’t look like it was constantly on the verge of falling to pieces, and it managed to get me properly invested in a world I’ve only had a passing interest in, while also rolling out its own lovable characters and identity.

TellTale sets up Tales from the Borderlands in a framed narrative, putting players in the roles of both the Hyperion deserter Rhys and Pandora-native con artist Fiona. The first episode starts with both characters being captured and forced to recount the events that led them to being separated from their friends, and apparently at odds with one another.

This set up has you playing as both characters as they tell their side of the story. Both characters often cut each other off, accusing the other of lying or not understanding the full scope of an incident. The framed narrative works well because the presumed deception going on means that switching characters often reveals crucial information that explains seemingly nonsensical events.

Even outside of Rhys and Fiona’s bickering, Tales from the Borderlands is full of laugh-out-loud humor, all expertly delivered from the game’s excellent cast. Troy Baker and Laura Bailey continue to show they have great voice acting chemistry together as Rhys and Fiona, while Nolan North and Patrick Warburton make the most out of their shorter screen time.

As expected, Tales from the Borderlands does have you making some pretty big decisions, and as you’re playing as two characters, how you choose to play either Rhys or Fiona will have an effect on how the duo feels about one another, meaning you can set up some pretty entertaining or dramatic interactions between them throughout.

Because there are two characters with motivations that you can alter, it will be interesting to see how TellTale manages to bring together the multitude of potential choices and outcomes by the end of the series when it reaches its finale.

When you’re not making decisions, Tales does have plenty of quick time events to give you a sense of agency while playing, such as combat segments and chase sequences. The action benefits from the game’s more stable nature, meaning that it’s actually smooth and enjoyable, rather than frantic and clunky like similar sequences in The Walking Dead or Wolf Among Us.

Tales from the Borderlands is my first experiences with a TellTale game that actually runs properly, and that is something worth celebrating. Now that the studio’s on better hardware, perhaps it will finally be able to tell its amazing choice-driven stories without the constant distraction of technical issues.

The studio is settling into a less dire and more humor-oriented setting very well, and I can’t wait to see where the studio takes Rhys and Fiona next.