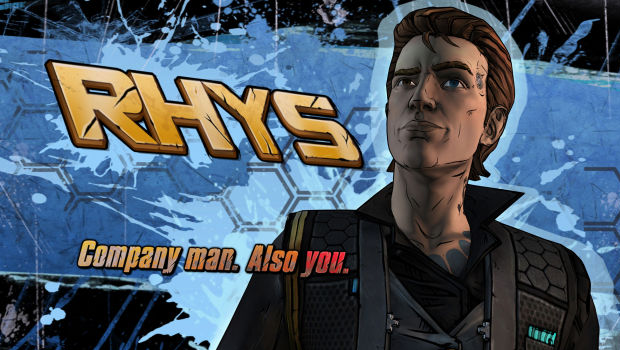 Before E3, I hadn’t been following Tales from the Borderlands, Telltale’s (of The Walking Dead and The Wolf Among Us fame) entry in the Borderlands series very closely.  I wasn’t expecting much when I went to Telltale’s small booth off of the main showroom floor this year.  How much narrative feeling could they pull from a game in the Borderlands world? A game, might I remind you, whose series which has selling points like, “it has a rocket that shoots acid then explodes.”  The demo Telltale showed proved what an amazing team they’ve got behind the game.

Remember, you’re not a vault hunter.

The demo made it clear that Tales from the Borderlands is extremely character driven, and the characters couldn’t be any more compelling.  In just a short 40 minute demo, I found myself absolutely in love with every personality we encountered.  The game has two protagonists.  Rhys, a Hyperion employee fed up with constantly being on the short end of the stick, and Fiona, a con artist whose story we didn’t get to see much of in the demo.

The characters are obviously not the brutes of the main Borderlands entries.  Characters hide from enemies and try and talk their way out of situations instead of the wild-west style of “letting their guns do the talking” that we’re used to from the series.

I found myself laughing openly many times during the demonstration.  Famous voices deliver lines with impeccable timing and the writing is nothing short of brilliantly funny.

It wouldn’t be a proper Borderlands game without that box with the green light on it, would it?

Tales from Borderlands has loot and money which can be used to get your way out of sticky situations, either with bribing or shooting, but don’t expect gunplay to work out like in previous Borderlands games.  Rhys is hardly a crack shot, so you won’t be able to mow down entire towns single handedly.  Luckily, he has the ability to call down a customizable robot from Hyperion to help him with the baddies.

It’s nice to see Telltale stepping away from the usually gritty atmosphere of The Walking Dead and The Wolf Among Us towards something more humorous while staying true to the narrative focus for which they are known so well.  The Borderlands universe may not have been begging for a fleshing out of its lore, but Telltale plans on giving you a gift you didn’t ask for and from here, it looks like you’re gonna love it.

Spencer Campbell has summited many mountains just to shout, “Video games are for nerds!!” After extensive scientific testing, he has concluded that they are. He plans on accepting his Nobel Prize as soon as the dorks in Sweden return his calls.
Related Articles: E3, Tales from the Borderlands
Share
Tweet
Share
Submit