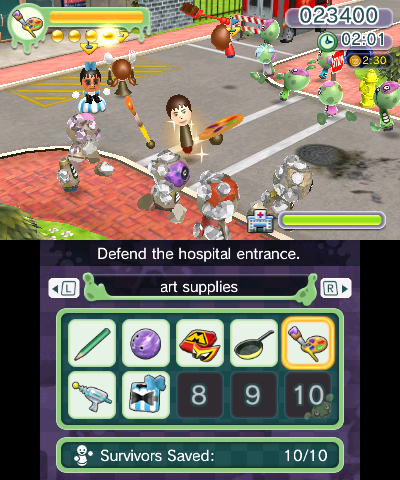 The Streetpass experience on the Nintendo 3DS has gotten a bit bigger, thanks the the addition of two new bite-sized titles: Ultimate Angler and Battleground Z. Available together for $7.99 USD or individually for $4.99 a pop, Ultimate Angler brings the world of fishing to the Miiverse, while those with a hankering for something more action-oriented can deal with a zombie invasion courtesy of Battleground Z. While on the surface they may seem like an odd couple of titles to bundle together, they both go a long way towards building on the cutesy and frankly weird experience that makes up the Mii-filled Streetpass sub-genre on the Nintendo 3DS.

Before getting into the overview of both of these games, some words of note. As mentioned, both Ultimate Angler and Battleground Z are Streetpass-centric games, to the point where they won’t even be available for purchase until you’ve managed to acquire some additional contacts via Streetpass to your 3ds. For those of you who live in areas where you simply don’t run into very many people walking around with 3DS units in their pockets, these games won’t even be available – so really, as with most games built around the Streetpass concept, a good amount of geographical knowledge goes into this experience. Know your neighborhood, and your own travel habits, before opening your virtual wallet up for these titles.

With that said, the first game I dove into was Battleground Z. While it’s tempting to write off Battleground Z from the start as ‘yet another zombie game’, the Streetpass/Mii aspect naturally adds a dimension not normally seen with the usual horde of undead slaughter titles. It’s a beat-em-up game, where Miis do their best to beat up the dozens of zombies trying to invade the city with a variety of cute and wacky weapons. What’s central to Battleground Z is that the weapons the acquired Miis use are based off of the hobbies of the Miis themselves. So a Mii whose hobby is ‘Studying’ will be administering zombie beatdowns with a pencil, while one with a ‘Dancing’ hobby will be going to town on the enemies with a disco ball.  There’s a good variety of potential hobbies for the Miis to have, meaning there’s a good diversity of weapons to acquire – which in turn intensifies the excitement of acquiring new Miis to experience inside of the game.

In fact, the amount of content packed into Battleground Z is pretty encouraging for its price tag. They key here is less so much the length of the game as it is the amount of ways it can potentially surprise you in terms of things to find or situations to experience, and on that front it delivers. There’s over a couple dozen weapons to pick up, along with a decent spread of areas to visit, zombies to fight, and more. At the end of the day, this is game where you take the Miis you bump into and throw them into a playfully post-apocalyptic world filled with adorable zombies and even more adorable ways to put them out of their misery – and really, I don’t think you have to be crazy to find that prospect enticing.

It looks relaxing, but is it a sport?

On the other end of the theme spectrum is Ultimate Angler, offering a fishing experience for your Miis to jump into. Compared to Battleground Z, it would seem at first blush like Ultimate Angler would be the weaker of the two – a world of zombies gives Miis something to cooperate with over, but really, exactly how much more exciting is it when you have more than one person fishing as opposed to going it solo? Naturally, the game makes sure to provide you with a reason for exactly that: the Miis you bring into your fishing experience will also be your primary source of bait for your icthyological outings. The type of bait you’re given will be determined by their favorite shirt color, with over a dozen different possible variables – which naturally makes having a variety of Streetpass sources important.

More interesting is that Ultimate Angler specifically rewards the player for making contact with far-away players. Meeting a player who lives far away from you can net you a silver ticket, while meeting someone from a whole other country can yield a gold ticket, both of which allow fishing access to special islands that normally can only be accessed by spending Play Coins. On the upside, that sort of twist is almost certain to make someone jump for joy the rare time the end up passing by a 3DS-wielding tourist. The fact that there’s an alternate way to get to the ‘rare’ parts of the world is encouraging, giving the player something more to work for. In addition to all of this, not only is there a good variety of fish to pick up, but you can also spend your acquired currency on tanks to store your caught fish in, as well as on decorations to place inside of those tanks.

Come on, just one star? That’s a huge fish!

All in all, Battleground Z and Ultimate Angler make for two welcome additions to the whole 3DS Streetpass experience. They represent two vastly different playgrounds of sorts to place one’s Miis inside of, giving some additional reason to go outside with the 3DS in pocket and hope to run into some new players.

Victor Grunn has been a gamer since the days of single-button joysticks and the Atari 800XL. When not lamenting the loss of the Ultima series or setting people on fire in Team Fortress 2, he's an aspiring indie game developer and freelance writer.
Related Articles: Battleground Z, Ultimate Angler
Share
Tweet
Share
Submit