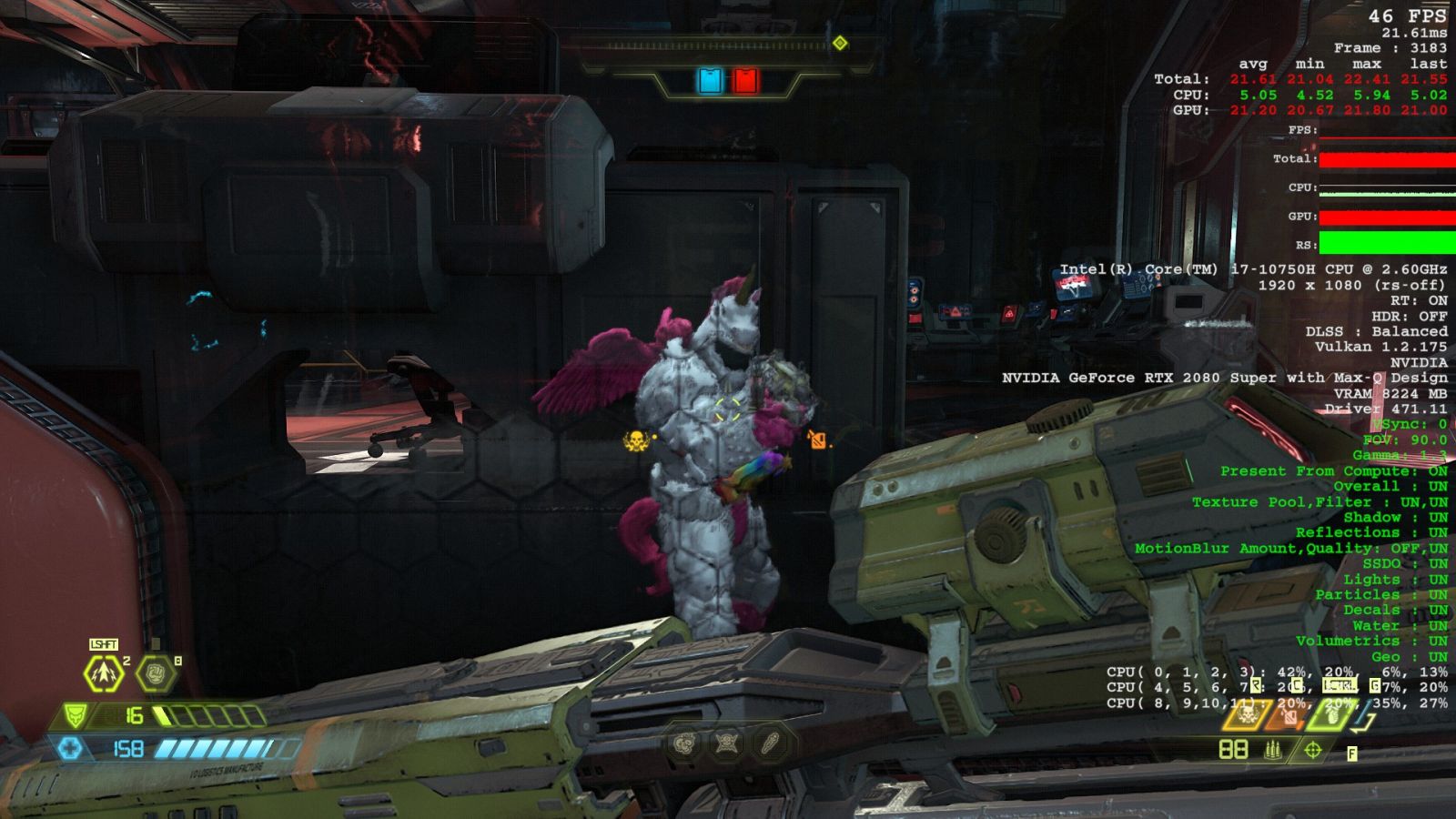 The test machine I was using is kitted out with 32GB of RAM, an Intel 10700, and I tested it on an RTX 3070 Ti and RTX 3080 Ti as they represent the top of the two classes of cards — ones equipped with GDDR6 and GDDR6X. I’m also running everything at Ultra Nightmare, because that’s how this game demands to be played. 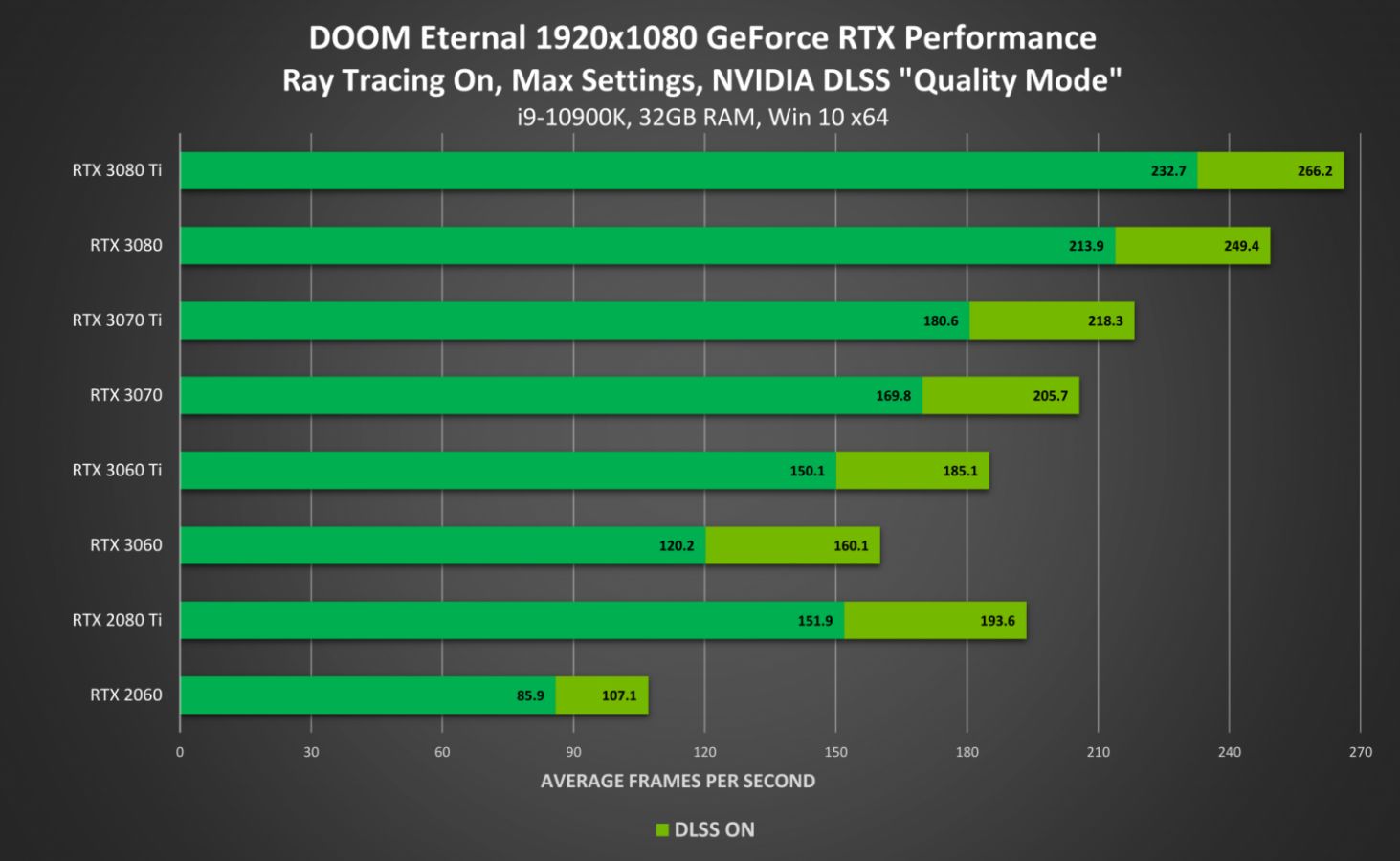 Right out of the gate I wanted to give a very clear showcase of RTX off and RTX on. In the first few moments of the video above, you’ll see it as a dull grey metal door edge turns into a glossy and shiny reflective surface, showing off my incredible rainbow unicorn Doom Slayer outfit and sparkles! What it also shows, however, is a fairly solid bug that drops my framerate from 240fps down to 40. That’s not normal as NVIDIA’s reported numbers are a lot closer to 130 with all the bells and whistles enabled.

Loading up the RTX 3080 Ti I worked my way into one of the most challenging sequences early in the first half of the expansion — Doom Eternal: The Ancient Gods Part 1. Full to bursting with enemies, as well as reflective surfaces in every direction, it pushes your GPU hard.

At 1440p, RT on, and DLSS set to Performance, the game hits around 200fps, with dips down to around 160 during intense firefights with lots of particle effects and reflections. Looking at the copious amounts of data available, it’s clear that it’s not the GPU but the CPU strangling performance. Still — even with a GPU that is about to be two generations old, there’s no doubt that 200fps is majestic. Turning off ray tracing and without DLSS enabled, framerates rocket closer to 280fps, with spikes up to 310 and dips down to 260, which is frankly staggering, but when you have THIS much slack in your framerate, you might as well enable ALL the bells and whistles. 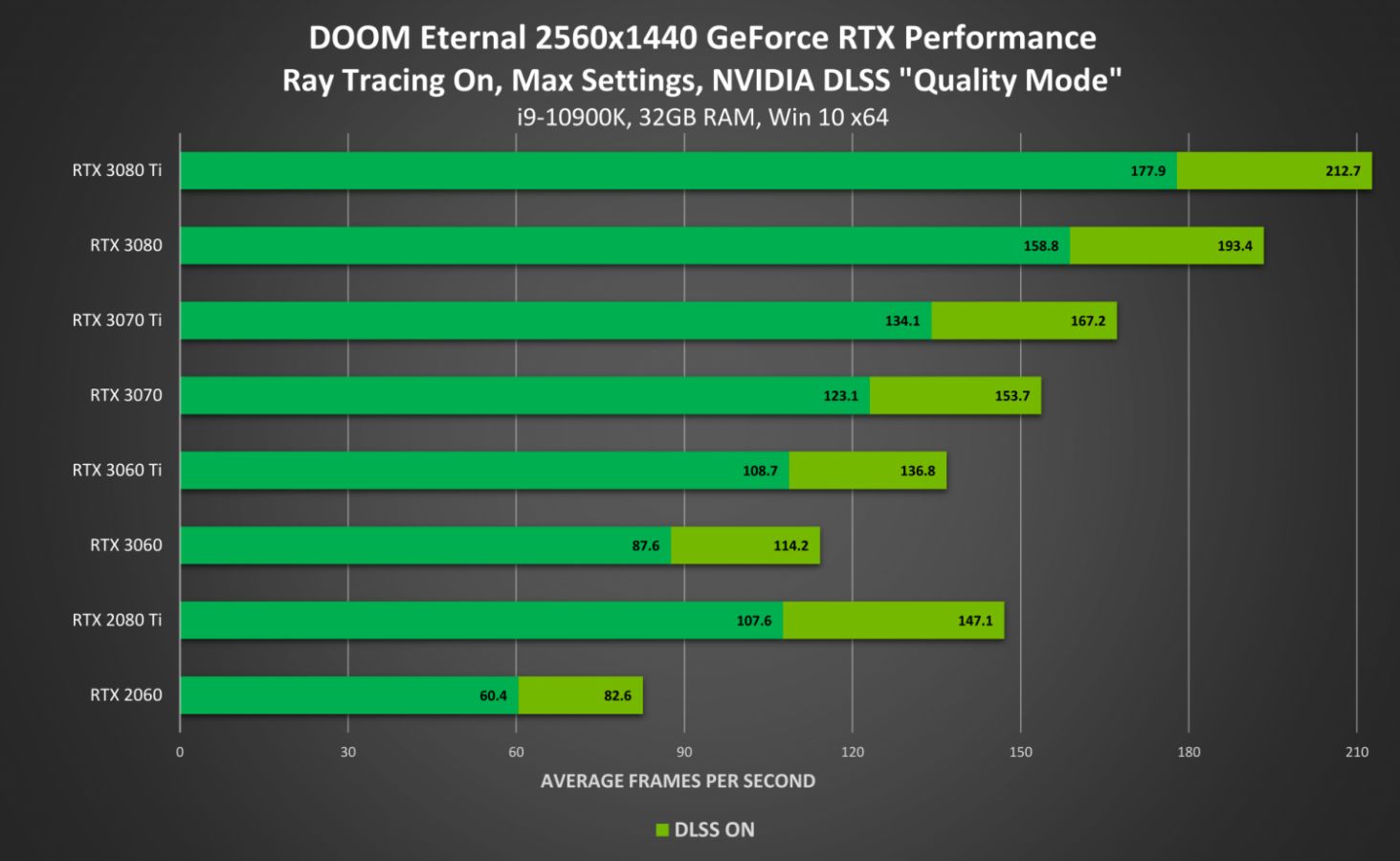 To see how much flexibility I might have with less hardware, I bumped the resolution back to 1080p, enabling RT and setting DLSS to Balanced. 220 frames per second is just a 20 fps improvement over 1440p. How much of a dip would I see jumping to 4K? Before I went down that road, I decided to try it out on a 2080 Super-equipped laptop first.

Since the raytracing functionality and DLSS isn’t locked down to 30-series cards, I loaded the game on my Predator Triton 500. Well, with a 2080 Super and 16GB of memory and sporting an i7 10750H at 2.6Ghz I was able to stay between 45 and 60fps with ray tracing enabled and everything running at Ultra Nightmare. As you can see from the specs above, that’s punching WAY above the recommended specs, and I’d be better off running at High Settings on the laptop. That said, knocking the shadows back one notch put me above 60, so suck it, recommended specs! 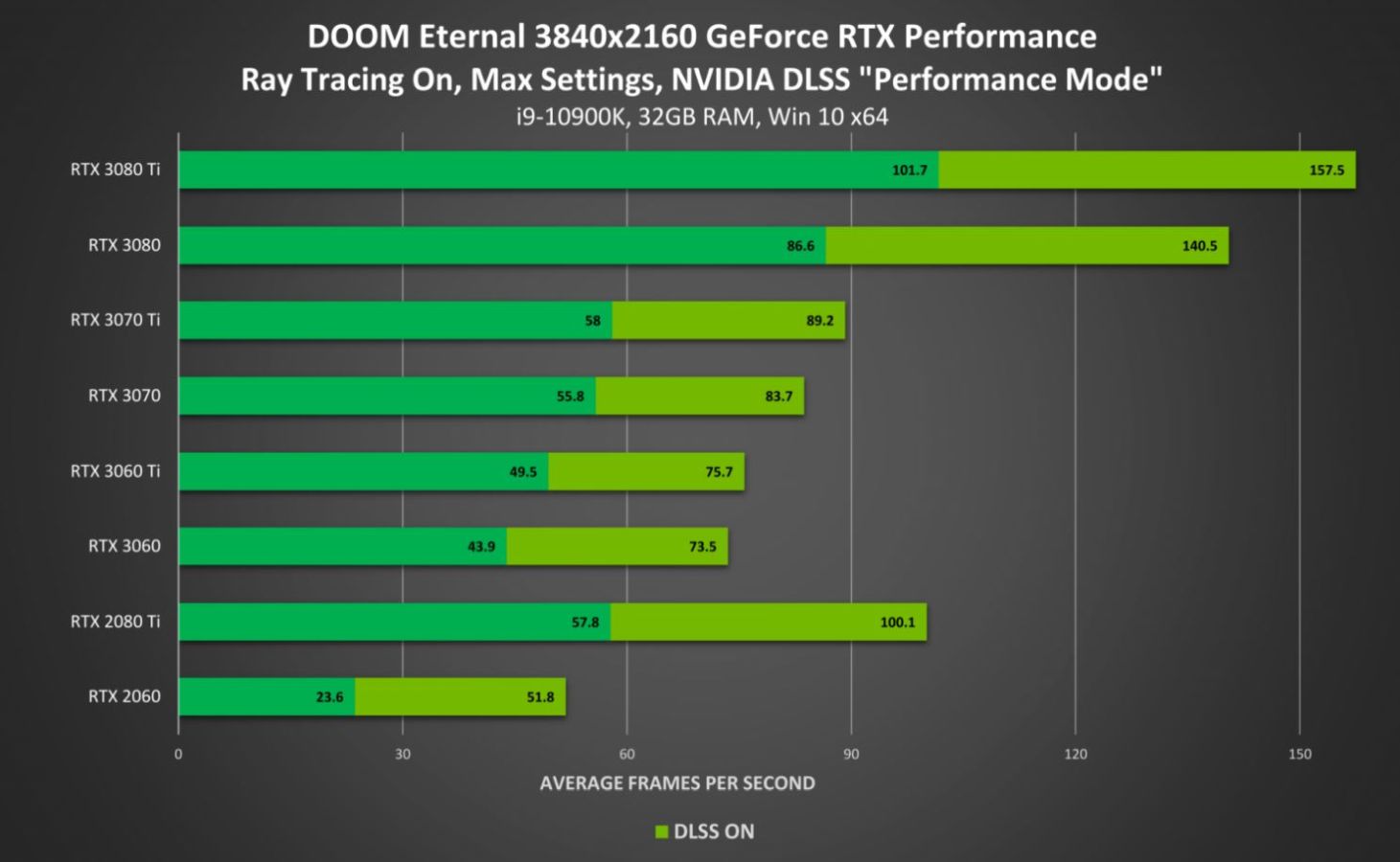 The final stop on the performance train is, of course, 4K. With ray tracing set to on and DLSS set to Balanced, I saw between 130 and 125fps, making this the absolute ULTIMATE way to play DOOM Eternal. While 1800p (or Quad HD+ — a very uncommon middle ground between 1440p and 4K) is sure to look good, and 60fps is fine and all, seeing the game push frame rates that exceed all but the most well-equipped 4K monitors past their limits is the way I want to rip and tear.

Update 6 for DOOM Eternal is out now, is free for all players, and enables DLSS, raytracing, and a whole bevy of new features. You can read about it yourself at the official page, and you can read our review for the original, or DOOM Eternal on Switch right here at GamingTrend.com

Ron Burke is the Editor in Chief for Gaming Trend. Currently living in Fort Worth, Texas, Ron is an old-school gamer who enjoys CRPGs, action/adventure, platformers, music games, and has recently gotten into tabletop gaming. Ron is also a fourth degree black belt, with a Master's rank in Matsumura Seito Shōrin-ryū, Moo Duk Kwan Tang Soo Do, Universal Tang Soo Do Alliance, and International Tang Soo Do Federation. He also holds ranks in several other styles in his search to be a well-rounded fighter. Ron has been married to Gaming Trend Editor, Laura Burke, for 21 years. They have three dogs - Pazuzu (Irish Terrier), Atë, and Calliope (both Australian Kelpie/Pit Bull mixes).
Related Articles: DOOM Eternal, Hardware
Share
Tweet
Share
Submit