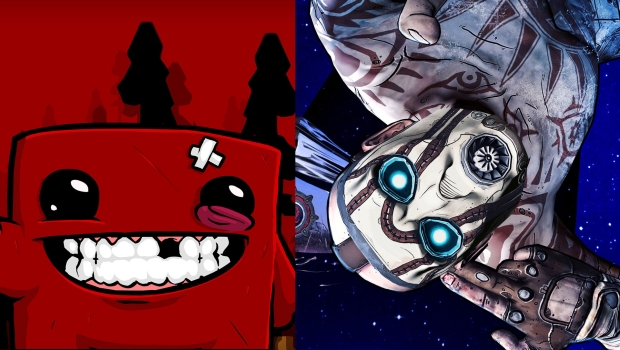 The Shield TV is far more than a TV service aggregation platform. As you might have seen in my review of the system, it’s also a very capable gaming machine in its own right. Beyond its ability to stream from a GeForce-enabled PC, it’s also able to run some fantastic games natively. While I did test out a few fighters and ARPGs during my review, there are two recent releases available for the Shield TV that will test the mettle of the device: Borderlands: The Pre-Sequel, and Super Meat Boy.

The Shield TV is able to provide games like Batman: Arkham Knight courtesy of the GeForce Now service, but native support for the Tegra X1-powered platform has been slowly growing since launch. Borderlands: The Pre-Sequel and Super Meat Boy have both released on PC and consoles, so I thought I’d take them for a spin for a quick comparison.

As Borderlands: The Pre-Sequel is running natively on the platform, it doesn’t have quite the same sheen as a PC would on higher quality settings. It’s still a good looking game, running at a solid framerate, albeit with a little bit lower texture quality. If I had to make a direct comparison, I’d say it’s equivalent to running the game on medium quality on the PC, or roughly the same quality as the Xbox 360 version.

Looking sharp on the new platform.

There is one big feature addition for the Google Play version of Borderlands: The Pre-Sequel — cloud save support. Given the propensity to frequently purge storage to make space for other apps and music, it’s nice to know that your saves will await you on your next install.

All things said, Borderlands: The Pre-Sequel shines brightly among the deluge of shooters on the platform. It may very well be the best FPS on the platform. The signature humor (e.g. “Oops! You nearly chose to play as Claptrap. Close one! I know you didn’t mean that! You didn’t…did you?”) is present and accounted for, and it looks better than any Android-powered game has a right to be. Given that the asking price on Shield is $14.99 instead of the $39.99 price on Steam at the time of writing, it’s a steal as well.

Super Meat Boy has also recently released for the Android ecosystem. If there is a game that will test your patience, as well as controller and console latency, it’s this one.

I was pleased to see that Super Meat Boy runs flawlessly on the Shield TV. The Tegra processor can keep up with the speed of the game, as can the controller. The split-second reaction time needed to keep from gibbing the titular character is easily handled by the Bluetooth connection — it felt no different than using my wireless controller on the PC. With load times of roughly a second, the game feels 100 percent faithful to the original release. Now a whole new group of gamers can be as frustrated by the difficult-but-rewarding gameplay of the game.

One of the things I mentioned in my review of the Shield TV was that the library felt a little light. Games like Super Meat Boy and Borderlands: The Pre-Sequel feel like a big step forward for the platform. I’m eager to see what new goodies NVidia has up their sleeve in 2016.

Ron Burke is the Editor in Chief for Gaming Trend. Currently living in Fort Worth, Texas, Ron is an old-school gamer who enjoys CRPGs, action/adventure, platformers, music games, and has recently gotten into tabletop gaming. Ron is also a fourth degree black belt, with a Master's rank in Matsumura Seito Shōrin-ryū, Moo Duk Kwan Tang Soo Do, Universal Tang Soo Do Alliance, and International Tang Soo Do Federation. He also holds ranks in several other styles in his search to be a well-rounded fighter. Ron has been married to Gaming Trend Editor, Laura Burke, for 21 years. They have three dogs - Pazuzu (Irish Terrier), Atë, and Calliope (both Australian Kelpie/Pit Bull mixes).
Related Articles: Borderlands: The Pre-Sequel, Super Meat Boy
Share
Tweet
Share
Submit