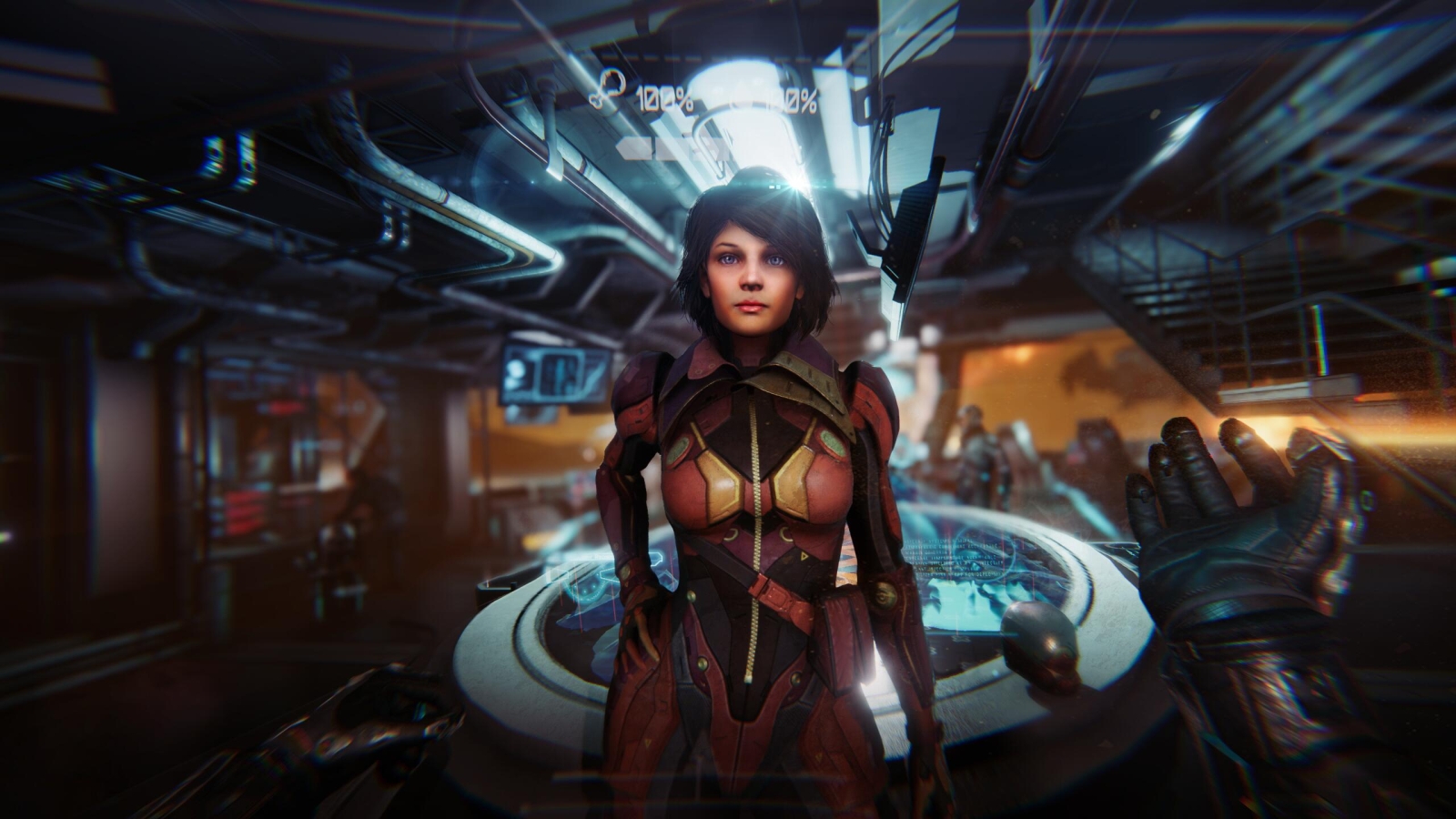 You hear the same complaints over and over with VR games. “Why aren’t there any full experiences?” or “What’s with all of these short demos?” Developer Multiverse has heard those same complaints, and they intend to answer them.

I’d not heard of Seeking Dawn until code arrived in my inbox to check it out. Somehow it had slipped from my radar, which is a surprise given how much I love virtual worlds. The setup is simple enough — the player steps into the space boots of Lieutenant Weston and it’s the 24th century. You are a member of the First Centauri Republic, fighting against the Alpha Centauri Commonwealth in a fight for independence. An alien world has been discovered, and the ACC has sent a task force to investigate it for any possible advantages that this new planet might hold. Unfortunately, that team has gone missing, and that’s where you (and any friends you enlist) come in.

Before we get started, let me preface this by saying I’ve put in several hours with the game, but I am a very long way from beating it. As such, this will be a review in progress. While I won’t be assigning a score as of yet, what I’ve seen so far is so damned impressive that it’s easy to recommend with just what I’ve played. Before we get into all of that, let’s talk through some of the more noteworthy ways that Seeking Dawn impressed me.

Seeking Dawn offers a bevy of comfort options to help keep the game accessible for all levels of potential nausea levels. For those of you who have read my VR reviews in the past, you are aware that I normally suffer from motion sickness using natural motion. Seeking Dawn supports blink, teleport, or walk movement options, meaning you can use a disappear and fade technique, a standard teleport, or the natural walking motion as your constitution will support. For whatever reason, I can’t handle smooth turning, so I was thankful that the game let me mix and match among the multitude of turning options, allowing me to use the snap motion, though smooth motion options are available here as well.

When I finally reached the base, I was surprised to see a full crafting engine in the game. Once you’ve unlocked the correct tools for the job (the Excabreaker and Woodchucker, respectively), you are able to harvest minerals and trees for crafting materials. The trees and rocks in the environment explode into a piñata of various items that can all be combined in your base to create new weapons and armor, but that’s not where this story ends.

The game is pretty gorgeous.

There is an entire paperdoll system for crafted or discovered equipment, and there are a host of weapons to find and create. You can wield them akimbo, if you are inclined, as well. Crafting new stations to cook food, render safe water, create and deploy defensive turrets, and ammunition, and equipment like flashlights are just a few of the things Seeking Dawn does to keep you engaged with the hostile world.

I was surprised to find that, despite a deep and expansive crafting and base building system, there isn’t a tech tree for Seeking Dawn. As such, you don’t upgrade as much as discard once you find yourself dying too frequently. It’s almost as if the punishment of loading is a reminder that you should revisit your base and 3D print some new weapons to take into the field. Naturally, once you get the rocket launcher (which, yes, you can wield akimbo) you can walk through the rest of the game fairly easily. I would have liked to have seen upgrades like the ability to harvest materials more quickly, or perhaps modular updates for my existing weapons such as larger magazines or damage modification.

Little numbers pop up to let you know you are connecting. That may or may not be your jam.

On the flip side, Seeking Dawn has one of the best inventory and quest management systems we’ve seen in a VR game thus far. It’s as if they took elements of Tom Clancy’s The Division’s UI and blended them with the paperdoll engine of Diablo. In practice it’s very effective, allowing me to keep my weapons and equipment handy, despite carrying quite a bit of it. It’s certainly a blueprint for how to do it right, as opposed to list-based games like Fallout 4 and Skyrim VR which make any use of the inventory instantly feel tedious, with just one exception — harvesting.

Having to pop open the inventory and mapping your Excabreaker or Woodchuck to one of your hand slots to harvest wood or minerals, then repeating the process to put them back into your inventory feels like something that could have been mapped to a button doubleclick or some other method to quickly swap into harvesting mode.

These little guys? They’ll eat you.

Admittedly, my VR system is probably not indicative of the norm (Intel 8700k / GeForce 1080TI), but I was surprised at just beautiful Seeking Dawn is. There were mouth-open wow moments as I explored the alien world. Life exists on every corner of this strange place. Dragonfly type fliers flit around, pulsing creatures meander through the sky, little mouse-like critters scurry about. There is a constant motion that isn’t normally present in VR games, and it’s a very welcome one as it makes the world feel alive.

Ticking off another one of the wishlist items for VR, the Multiverse team also built Seeking Dawn to be a cooperative multiplayer experience. With support for up to four players, and cross platform, the game will, at some point, allow gamers to gun down critters together. I say “at some point” as Mike Dunn and I spent nearly two hours trying to get our games to connect together to no avail. Despite his running hardwired gigabit speed Internet, he kept receiving a “Check your Network and Reboot” messages whenever trying to join a multiplayer game with his Oculus Rift. I received similar messages with my Vive, albeit less frequently. When I was able to to briefly join a multiplayer game, I had lag bubble issues and latency. Chalk these up to launch woes, but the team has promised post-launch support to resolve these issues, as well as adding additional content and updates.

Unfortunately, we were unable to get multiplayer working at this time.

There is one element that sticks out that I absolutely do not like about Seeking Dawn. The developers have essentially gated certain sections of the game behind specific weapon types. Boss monsters will shrug off all but the most stalwart attacks from a singular weapon, which requires a farming-level of harvesting to ensure you have enough ammo to take it down. This feels like artificial padding to a game that doesn’t require it. The creatures already have weak points, armored sections, and your precision firing makes the difference as they get faster and stronger, so why also include the tickbox to force the player to have the fuzzy foozle stick of doom to succeed? Let the immersion handle that heavy lifting — you don’t need to force it.

Seeking Dawn shows a great deal of potential at launch, though it has a few hiccups to iron out as it leaves the starting blocks. Still, it represents an excellent step forward for the VR platform, and a solid entry for the shooter genre. Stay tuned as we work through the rest of the game and revisit this review-in-progress.

Ron Burke is the Editor in Chief for Gaming Trend. Currently living in Fort Worth, Texas, Ron is an old-school gamer who enjoys CRPGs, action/adventure, platformers, music games, and has recently gotten into tabletop gaming. Ron is also a fourth degree black belt, with a Master's rank in Matsumura Seito Shōrin-ryū, Moo Duk Kwan Tang Soo Do, Universal Tang Soo Do Alliance, and International Tang Soo Do Federation. He also holds ranks in several other styles in his search to be a well-rounded fighter. Ron has been married to Gaming Trend Editor, Laura Burke, for 21 years. They have three dogs - Pazuzu (Irish Terrier), Atë, and Calliope (both Australian Kelpie/Pit Bull mixes).
Related Articles: Let's Play, Seeking Dawn, VR
Share
Tweet
Share
Submit