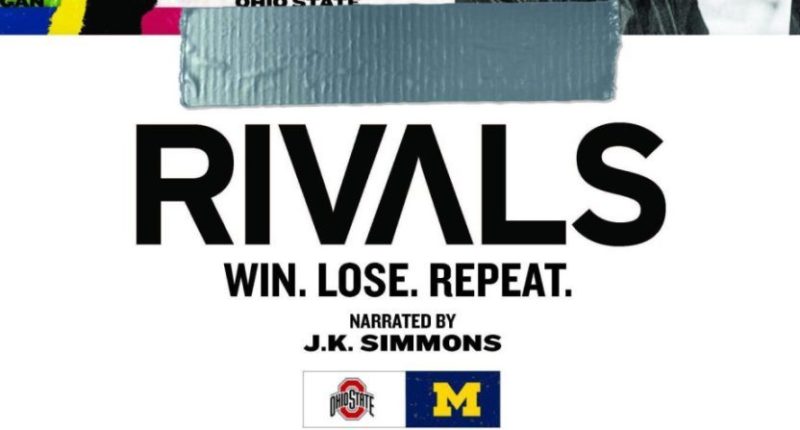 For those of you who know me, you’ll know how big a football fan I am. While I mainly watch the NFL, I grew up watching the Tennessee Vols and went to school at Middle Tennessee State University, both I still follow to this day (go Vols and Blue Raiders!). There’s something about a college football gameday that’s unrivaled in sports, and when a rival comes to town, it’s even more intense. We were invited to watch a screening of the Documentary RIVALS: Ohio State vs. Michigan which talks about the psychological and emotional aspects of college football rivalries with a focus on one of the most intense rivalries of all time: Ohio State vs. Michigan. We also had a chance to sit down (over Zoom) with some of the individuals who worked on the production: Executive Producers L Jon Wertheim and Ken Solomon, Director/Writer Peter Karl, and Journalist John Bacon. So what is the deal with RIVALS: Ohio State vs. Michigan? Let’s discuss.

This has to be one of the most entertaining sports documentaries I’ve seen. It does a great job of explaining the necessary information from both a historical and psychological perspective while also keeping it entertaining enough that you’re still paying attention throughout the more dense aspects. I asked, “Your team added quite a bit of comedy into Rivals. The introduction of different phrases or situations in a funny way really got me hooked early. What led you to go into humor for a documentary like this one?” Their responses were great, Jon chimed in first, “Look, people know that Ohio State and Michigan are rivals. They can go to Wikipedia if they want to know who won what game and what year by what score. What we really wanted to do was make this fun and digestible but have fans walk away with a better sense of what is a rivalry, why do we care so much about these games, why is it different when Ohio State plays Michigan… We thought that humor would be a good way in and JK Simmons, our trusty narrator, lended his touches as well.” After that, Ken jumped in with, “…there’s a tremendous amount of great work being done in the long form world on sports and sports stories and this is one of the greatest ones, and we wanted to make sure that this was just different, right?” (You can hear the full quote in the interview we did). You can tell the crew of RIVALS is passionate about doing something different with their production, and it’s truly clear when you hear from their executive producers.

Speaking of JK Simmons, something that I have to discuss is the masterful narration job he did. I have been a fan of his for a long time. Cave Johnson from Portal, J. Jonah Jameson in Spider-Man, and don’t forget his masterful performance in Whiplash (as a drummer I loved that movie). When I spoke with Executive Producers Ken and Jon, I asked, “when choosing JK Simmons as your narrator for this project, did you know beforehand that he was a big Ohio State guy? Or was that just a happy accident?” Then I mentioned that JK’s interactions with Rich Eisen were some of the funniest moments to me. Again, they chuckled and told me they knew of JK’s love for Ohio State and that made it even more fun when he and Rich got to have the moments they do in RIVALS.

While I knew of Ohio State vs. Michigan as teams, they weren’t “my teams” so I didn’t know everything about their history. This rivalry has so much history that even New York Times Best Selling author John Bacon learned something new while working on this project. During our interview, John said, “What I was very gratified about is the stories beneath the surface are the ones that made the cut… What was fun about this was it was actually an original take… There are a lot of documentaries about this and I’ve read a few books myself about this and I actually learned some things that I didn’t know. So, the most gratifying thing for me is to get beneath the surface to talk about the infrastructure of how this rivalry is set up and why it’s very likely to endure for a long time no matter what is happening on the surface and that was the fun part for me.” Rivals does a great job of giving some of the most important details that you need in a good documentary while focusing on specific moments and eras allowing the audience to truly understand how intense this rivalry truly has been.

When talking to Director Peter Karl I asked “When working on Rivals, did you ever have to tone down someone’s fandom for the scene to work. As a football fan myself, I understand how riled up some fans can get when talking about the history of their team.” As you can see when I asked the question, we got a good laugh from him and he responded, “Yes, well, not so much rile them down, but cut them out, or, cut out the parts that I loved that people were answering some questions very enthusiastically. Particularly one of the Ohio State fans; he’s interviewed outside the stadium, he had some golden lines that just weren’t safe for television. But those will be forever repeated between myself, the producers, and the guy who edited it. It will live on forever.” This quote made me laugh because it truly seemed like the people getting interviewed were so genuine about their fandom and that made the whole project much more heartwarming than a normal documentary. Not just facts, but showing the science and the emotion behind it all and why that’s important.

There’s a whole section of the documentary that focuses on the science behind rivalries. One of the most interesting parts, in my opinion, was when they dove into the differences between the players’ minds during home games versus away games, and when playing against Rivals. Them mixing the science and the emotion really brought forward some of the coolest parts of this documentary and something that makes RIVALS stand out in the landscape of sports documentaries.

RIVALS focuses on many things, but one of the story lines I loved the most was about coaches Woody and Bo from Ohio State and Michigan respectively. RIVALS does a great job telling their story from start to finish, allowing for alumni players, journalists, radio clips, and more from both sides to discuss why those two were important to the rivalry between the two schools. Seeing and hearing from all of these people and the passion they have for their schools and the sport was so much fun.

As an outsider looking into this rivalry, it kind of made me choose a side in this rivalry. I won’t tell you which side I chose, but with all the information that RIVALS gives the audience, I think everyone can find who they want to cheer for so that the next time we see the rivalry on TV it’ll be even more impactful. We want to thank the team at RIVALS for giving us the opportunity to view RIVALS: Ohio State vs. Michigan early and getting a chance to talk with Executive Producers L Jon Wertheim and Ken Solomon, Director/Writer Peter Karl, and Journalist John Bacon.

Adam is a musician and gamer who loves his partner in crime, Regan, and their two pets Rey and Finn. Adam is a fan of Star Wars, NFL Football, and gaming in general. Follow Adam on Twitter @TheRexTano.
Related Articles: RIVALS: Ohio State vs. Michigan
Share
Tweet
Share
Submit