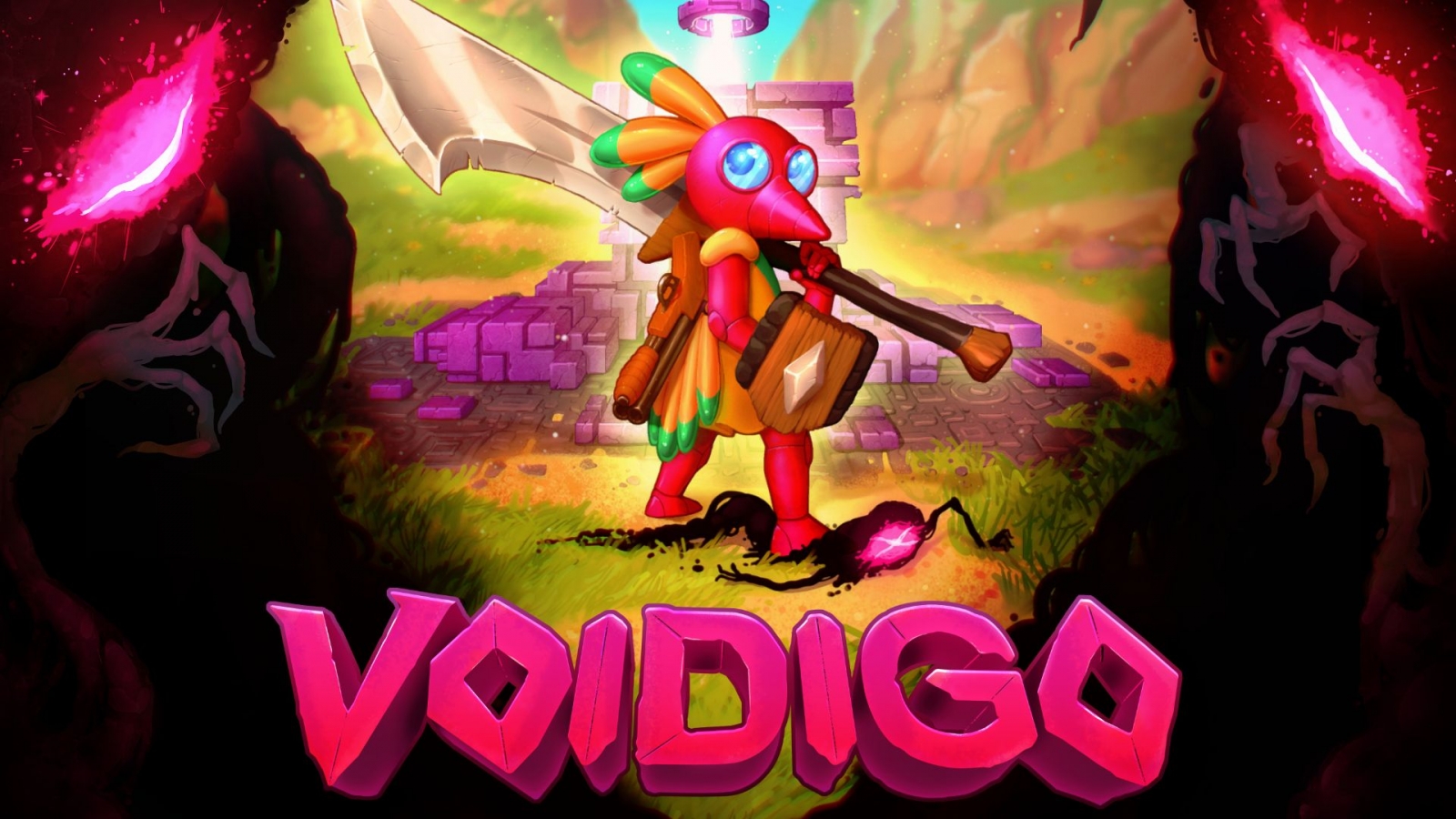 I don’t generally like starting any writing this way, but roguelite games are just not my type. There’s nothing wrong with them, I just have a hard time getting into them. It’s probably just my preference of games that have a little more narrative to them, as well as don’t punish me for dying by taking my stuff away, but that’s the way I feel. Crazy enough I own a bunch of these games, from Dead Cells to Moonlighter to Risk Of Rain 2, but the draw isn’t there for me. Of course, when I heard about this new roguelite, Voidigo, I had to try it, and even though my sensibilities tell me I wouldn’t enjoy it, I’m still having fun messing around in it’s colorful world.

Let’s start at first with that colorful world: it’s fantastic. Voidigo was created by Semiwork, who actually started as a team working on animated shorts, so everything you see in the game world is built from the ground up by a superb group of animators. Voidigo is not short of charm, from the soft, bubbly environments filled with crab enemies (I’ve found out they’re called “shramplings”) to the dark hallways of the Void Puppet (one of the boss enemies, but I’ll leave him for you to find). Of course, it wouldn’t be half as charming if not for the hero, a little “bird” named Drash you can lightly customize at the start of your runs. Each jump, melee, and dodge oozes whimsy, and the mostly lighthearted take definitely appeals to me more than the serious feel of Dead Cells.

The gameplay itself feels simple, but the way in which you’re going to do it feels much more complex. As a roguelite, it boils down to killing monsters and not dying. If you do, you’re going to start back at square one, and that’s without anything you’ve earned along the way. This portion does feel a little barren to me, while I know most roguelites are like this you usually have something that sticks with you even if you die. Maybe I’m missing it, maybe it’s not there because of early access, but it’s noticeable. On the plus side, the runs you make aren’t going to take long given the early access, as I was able to manage a quick four stage playthrough in about an hour on moderate difficulty.

Now, I’ve managed to make it through a whole paragraph about gameplay without telling you how combat works, shame on me. This is the hook of Voidigo for me, and it’s because of the ridiculous weapons. This isn’t necessarily Ratchet & Clank, but that isn’t the worst comparison of something I’ve ever made. There are pistols, shotguns, rifles, bows, launchers, and melee weapons, all with different looks and feels. I’ve fired a lot of weaponry in my gaming days, but I’m not sure I’ve ever taken on a giant ant creature with a gun that shoots bananas. Not everything is this weird, although the snake egg launcher that explodes with snakes going everywhere is pretty close, but the charm and diversity of the environments and creatures around you make this feel perfectly in place.

The gameplay also comes alive with the powerups you find as you defeat enemies and clear extra stages. There’s everything from shields that protect your back, to the addition of possible fire damage when using a projectile weapon, to spider legs that help you move faster. I definitely have yet to find and use everything, but these fit in the game as well as the weapons do. My only complaint would be that you don’t get a chance to see exactly what the item will do, and since you’re making a choice between three different ones generally, I’d like to have a bit more knowledge than the name displayed.

Playing each level of Voidigo is fun because it plays out kind of like a dungeon in one of the top down Legend Of Zelda titles. You move around an area, then choose what direction you want to go next which leads to another area. There aren’t many, and the objective is as simple as clearing a diamond-shaped void from the spot by jumping on it, so as to unlock portions of the bosses health bar to take them down. Oh, I’ve forgotten the whole point of the game here, and that’s beating unique and weird looking bosses in each stage. This is a ton of fun, with lots of frantic shooting and learning each boss’s attacks.They also don’t stay put, leaving you to chase them across different areas of the level at times, and once their health is depleted you still have to finish off a void-charged version of them. It plays out the same in each one of the runs I did for each boss (although you do have plenty of difficulties available), but it’s fun, and as long as a lot of unique bosses are planned for the final version of the game, I’m fine with how they’re going about it. 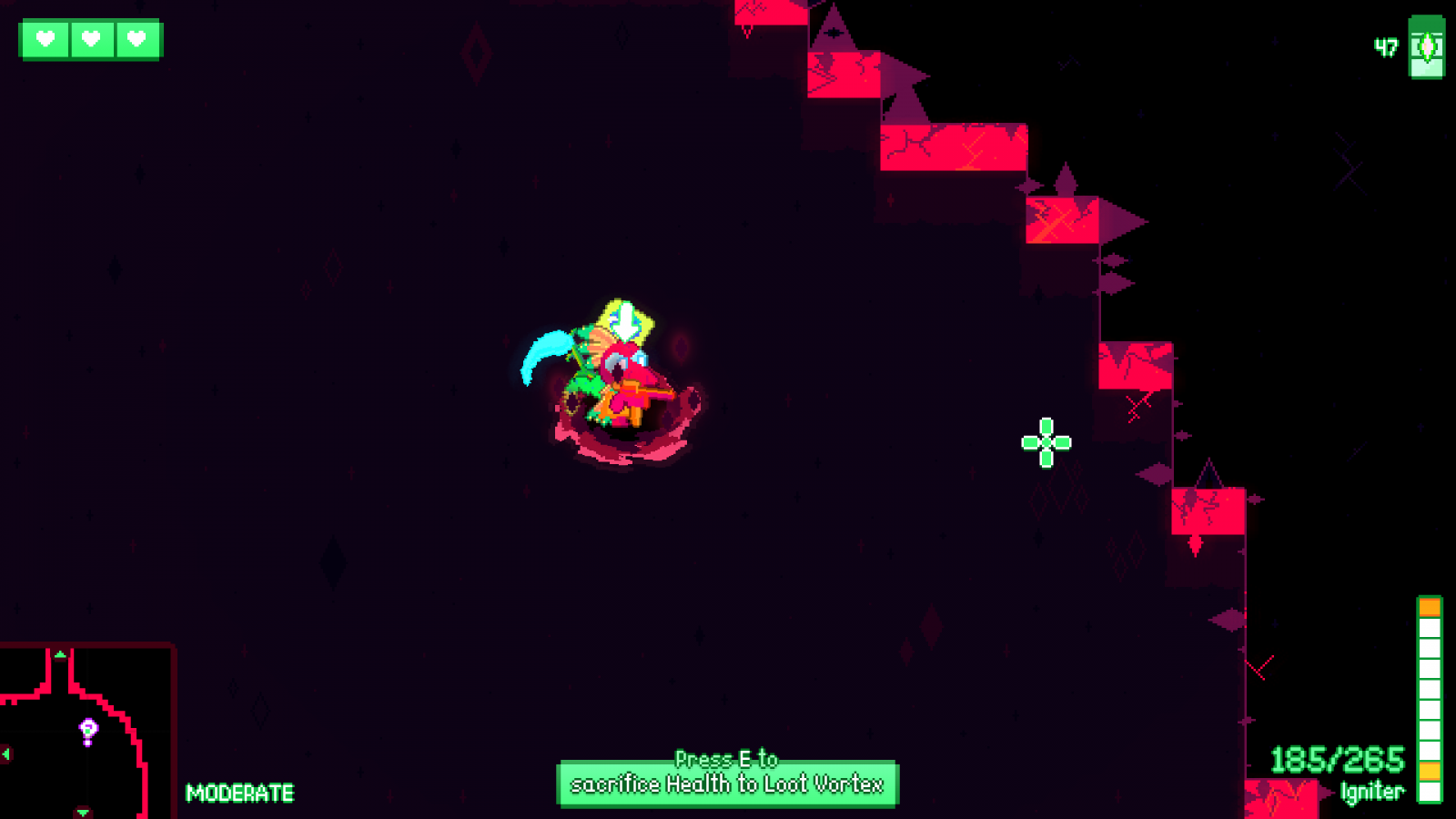 My only qualm with Voidigo at this point is that it definitely feels very early access, with short runs that require repetition to increase gameplay time. I assume it’s due to this, but there doesn’t seem to be an endgame, with the void currency I’d collected of no use to me. This seems like a placeholder for that “thing that sticks after death”, but for now it’s a question without an answer. I know you don’t always get it in roguelites, and maybe it’s not Semiwork’s intention to add it, but the absence of a narrative is felt, especially with how well the setting feels like it can support one. There’s even a little snippet of text when choosing Drash that would lead you to believe there is a greater purpose, but for now we’re going to have to wait for it.

Even with those reservations in tow, the potential of Voidigo decidedly outweighs them. Like I said before, I’m not much for roguelites, and I may never play this one on a regular basis, but for those of you who do, this has the makings of something unique. I don’t feel the stress of the genre in Voidigo, and that can allow for another type of player like myself to more easily pick it up. If just for the banana gun, I’d suggest you monkeys go check it out.

David Burdette is a gamer/writer/content creator from TN and Lead Editor for Gaming Trend. He loves Playstation, Star Wars, Marvel, and many other fandoms. He also plays way too much Call Of Duty. You can chat with him on Twitter @SplitEnd89.
Related Articles: Voidigo
Share
Tweet
Share
Submit