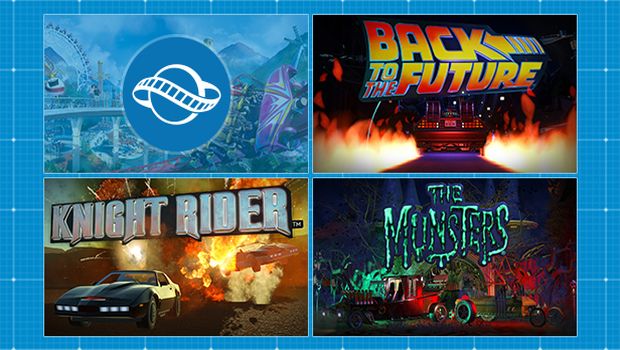 Planet Coaster has been one of my favorite games of the last few years, and developer Frontier Developments has been great about releasing a metric ton of free content since the game’s release. Five major updates, including the recent Summer Update that added custom video billboards and audio support, have expanded the game with new rides, security guards, fresh coaster types, and a massive list of quality of life improvements. Recently, we’ve gotten our hands on the first premium DLC items, and I’ve put together a quick video showcasing all three of the themed items in one of my own parks.

The DLC packs provide cars from Back to the Future, Knight Rider, and The Munsters, as well as all of the individual parts to build them into new things (I’ve already seen somebody mod the car chassis into a Back to the Future arcade ride), as well as smaller versions for use on the Go-Kart tracks, like you’ll see below. Here’s a closer look at what’s in each pack.

If you have played games with DLC, you know that it can quickly divide the community into the haves and have nots. Frontier thought about this — here’s a snippet from the team on how this works when you download something that contains DLC that you don’t currently own:

If you do not want to purchase any additional content, that’s fine! You’ll be able to toggle them on or off by using the ‘lock button’ right next to the in-game search bar.
Any items on the Steam Workshop that feature paid content items will be marked with a special tag; if you own the same content items as the Workshop item, you’ll be able to place and interact with that blueprint as you would normally. If you do not own the same content items, you can still subscribe to that blueprint, but you will not be able to place it in your park – it will give an ‘obstructed’ notification as well as a warning that the item you’ve selected included DLC content.

The same happens with entire parks that contain additional content; upon opening the park, you will get an in-game notification that tells you this park contains DLC items. You can ignore the notification and fly through the park as you normally would, but any paid content will be locked for you and it won’t function within the park unless you have the correct kit purchased.

It takes absolutely no imagination whatsoever to imagine animatronic dinosaurs DLC for a Jurassic Park pack, animatronic shark attacks for Jaws, and much more. If this first foray into paid DLC is any indication of the future, Planet Coaster is growing in an amazing direction.

Ron Burke is the Editor in Chief for Gaming Trend. Currently living in Fort Worth, Texas, Ron is an old-school gamer who enjoys CRPGs, action/adventure, platformers, music games, and has recently gotten into tabletop gaming. Ron is also a fourth degree black belt, with a Master's rank in Matsumura Seito Shōrin-ryū, Moo Duk Kwan Tang Soo Do, Universal Tang Soo Do Alliance, and International Tang Soo Do Federation. He also holds ranks in several other styles in his search to be a well-rounded fighter. Ron has been married to Gaming Trend Editor, Laura Burke, for 21 years. They have three dogs - Pazuzu (Irish Terrier), Atë, and Calliope (both Australian Kelpie/Pit Bull mixes).
Related Articles: Let's Play, Planet Coaster
Share
Tweet
Share
Submit