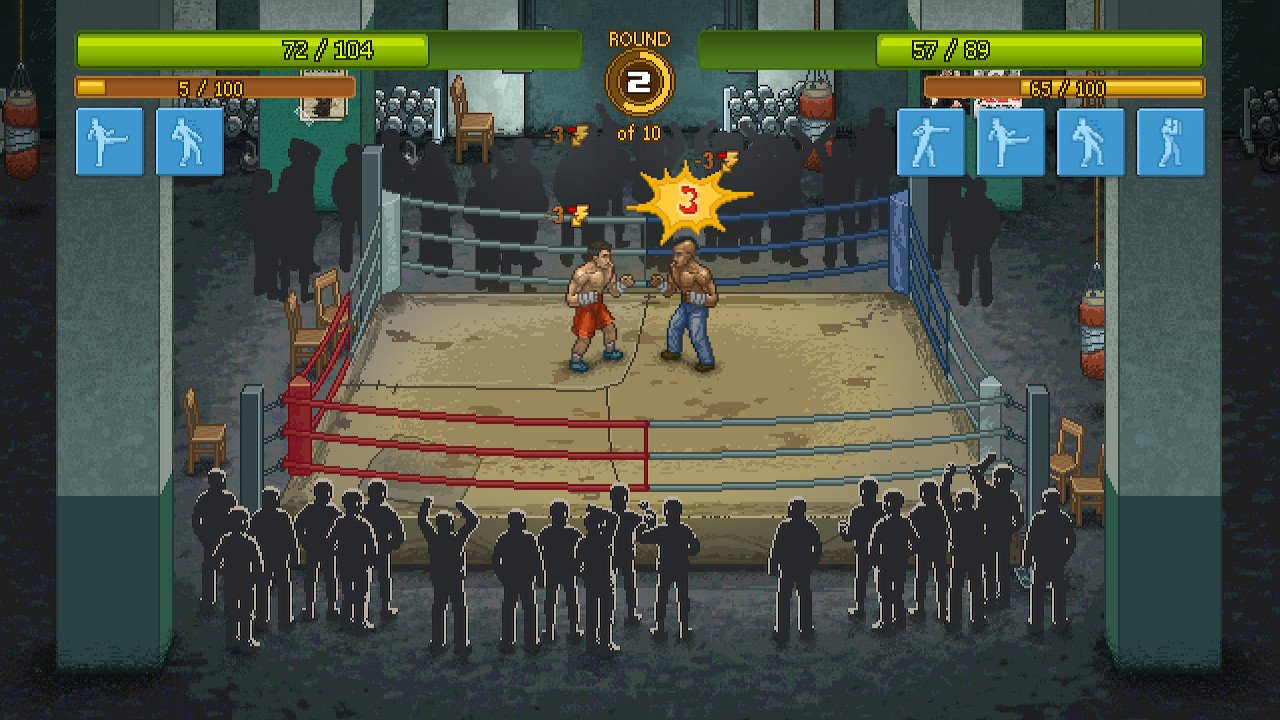 If you’re in the market for a difficult but rewarding boxing simulator on the Switch, tinyBuild has you covered with Punch Club. While slightly unfair at times, it’s still an engrossing simulation game that works very well on the Nintendo hybrid. The Switch version is nearly identical to its PC counterpart, I’ll do a short rundown on what to expect while jabbing and dodging your way to the top.

Punch Club begins as your father is killed by a mysterious enemy and a friend of his takes you in as you train to become a celebrated boxer. Further into the game, you also take on the role of a vigilante, a street fighter, and even a pizza delivery guy. The story is inspired by 80s action movie tropes, and I thought it was a pretty nice pastiche of the throwback era. While there are more story beats to explore, the heart of the game lies in the loop of training and fighting.

You’ll be able to participate in battles, from fights in the rookie league to illegal fight rings and even random bouts with street thugs. Battles take place in rounds, and while you won’t directly control your fighter, you can select different actions like heavy punches and blocks that they can use at random intervals. You’ll have to manage your moves wisely, as stronger techniques will use more stamina, which continuously depletes. Getting to zero will force you to rest up, and losing all your health will make you lose the battle.

The Switch release shares the same flaws as other versions of the game, mainly with the repetitive nature of the core gameplay loop. While it is monotonous near the end, I found the beginning of the game quite frustrating as well, since you’ll have no real way of fighting past the random encounters and battles unless you strictly follow a regimen. Even then, Punch Club can throw you for a loop and give you an unfair disadvantage.

Prepare to get swole every day, or face the consequences of loss.

My first few fights in the rookie league ended in failure because of my limited moveset until I could train and unlock my skill tree, and the micromanagement here can be somewhat of a pain. Due to the nature of the game, where you lose stats passively every in-game day regardless of workout plans, you won’t excel in all three main stats, so you’ll have to make sacrifices to cater towards your playstyle. While it was frustrating when the game’s strictness punished me, it felt so satisfying to win matches based on careful planning and execution. Matches are passive, and you’re restricted to general commands rather than getting active in the fight, but I felt energetic watching my fighter pummel opponents in battle.

On a technical standpoint, Punch Club runs perfectly. To be fair, the pixelated artstyle and uninvolving gameplay means that there isn’t much going on. There were no framerate drops on either handheld or docked mode, and pixel animation displayed fluidly. With the art direction and the subject matter, I enjoyed Punch Club more undocked than on a big screen; there’s nothing terribly wrong with playing this game docked, but this game feels much better on the go in short bursts rather than in long, uninterrupted sessions. The soundtrack isn’t too remarkable, but it gets the job done.

All in all, Punch Club is a solid one-two combination of simulation and sports genre, even if it’s really only the former. Its punishing difficulty and somewhat unfair mechanics might turn off those looking for a casual experience, but those who want a great simulation title should download this straight away.

Cracking open a cold one with the boys.

Elisha Deogracias is an aspiring accountant by day, freelance writer by night. Before writing for Gaming Trend, he had a small gig on the now defunct Examiner. When not being a third wheel with his best friends on dates or yearning for some closure on Pushing Daisies, he's busy catching up on shonen manga and wacky rhythm games. Mains R.O.B. in Smash. Still doesn't know if he's a kid or a squid.
Related Articles: Indies, Punch Club
Share
Tweet
Share
Submit