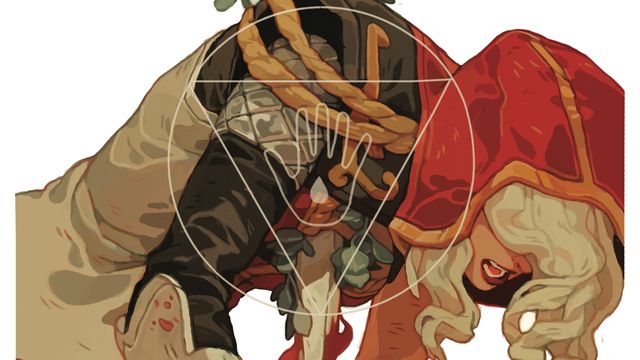 For as much rich lore and cultures that the Dragon Age series boasts, you’d think at this point we’d have more stories to tell that don’t involve the world of Thedas’ perception of mages.

Dragon Age: Magekiller’s first issue does little to differentiate the comic from several of the stories that we’ve already experienced in Bioware’s universe, as it focuses on perhaps the most rote part of the fantasy world the studio has created. The first six pages of the 24-page issue shows its co-protagonists, mage hunters Marius and Tessa, hunting down an apostate blood mage as Tessa waxes on about how diabolical and evil mages are. She uses examples of corruption and possession to justify her mindset toward mages, while also claiming that their power is beyond that of anything a mortal man should have.

It all just sounds so familiar, doesn’t it?

From Dragon Age: Origins to Dragon Age: Inquisition, the constant struggle between mages and the general populous has been either a focus or at the very least a B-story. It’s often shown to be filled with shades of grey while those involved often view the opposing sides in black and white. Magekiller has an end-issue twist that has the series heading into some uncharted territory for the series, but while there’s chance to bring some nuance to some cultures in Dragon Age that are typically portrayed as an absolute, I can’t help feel like I’m ready to hear about something else in this universe before hearing this overused narrative subverted and likely reconfirmed again.

Outside of the mage storyline, Magekiller does offer a pretty interesting look at its two main characters. When Tessa isn’t going on about how unnatural mages are, she makes some observations about Marius that paint a picture of her stoic and deadly partner. While Tessa is more carefree and mainly concerned about profit, she points out that Marius seems altogether unfeeling when it comes to killing mages, and even indifferent about the money he gets for doing it. While I’m not particularly interested in hearing another mage story, I am intrigued by these two, and am looking forward to seeing more of them.

Magekiller is only one issue in, but I’m already feeling disinterested in its retreading of familiar territory. Whether the characters will make up for it remains to be seen, but the first issue of Magekiller doesn’t do enough to help itself stand out in the sea of Dragon Age stories we already have.