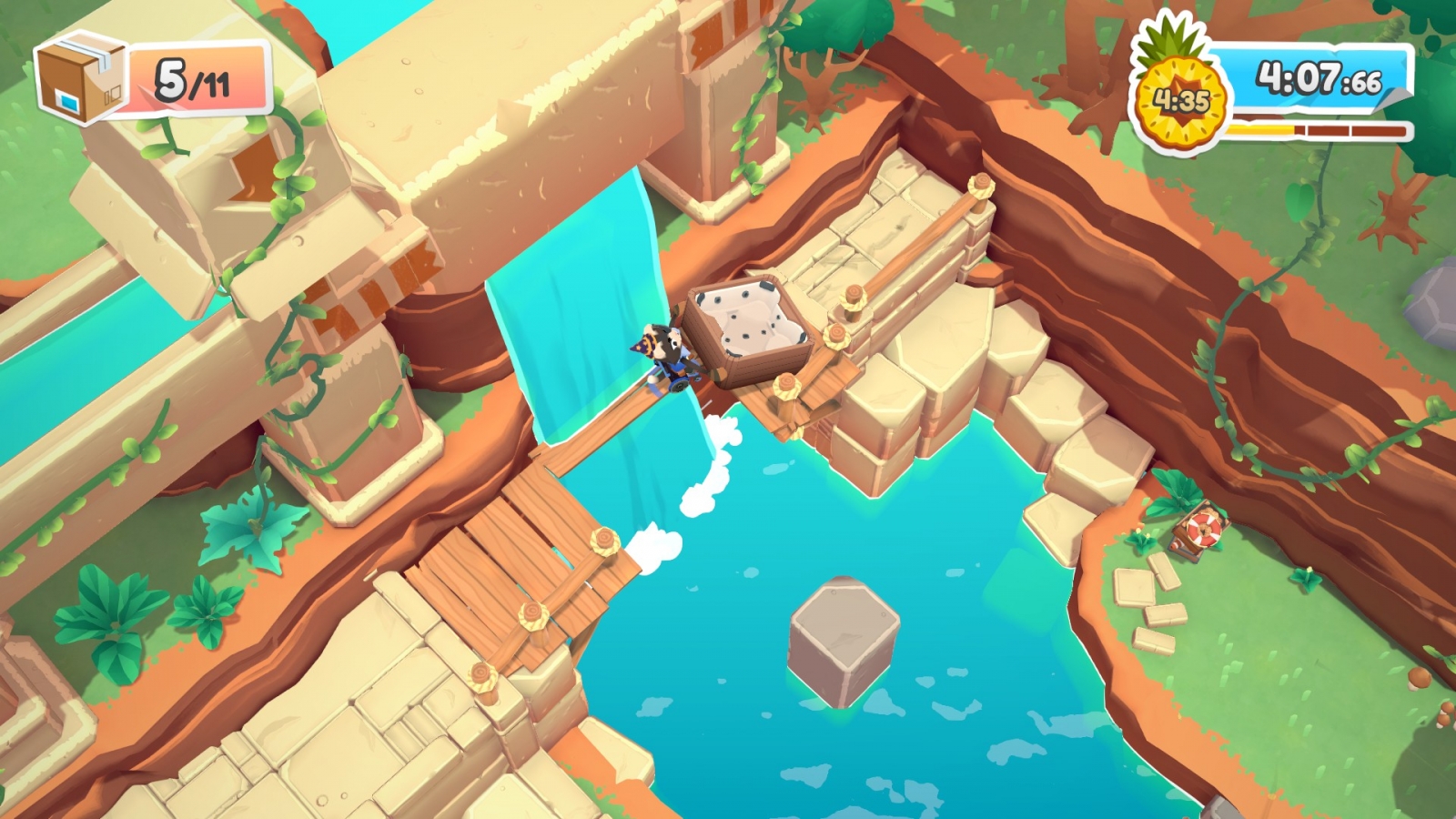 While I really enjoyed last year’s Moving Out, a comedic game about moving furniture, I thought it could be too difficult for a single player to enjoy. Movers in Paradise is an expansion to the base game adding some of the most difficult moving challenges to date, and it also doubles down on the multiplayer mayhem which unfortunately makes the single player option almost impossible to complete.

Movers in Paradise can be accessed at any time during the main campaign by simply driving over to a boat on the world map. The F.A.R.T. crew travels to Packmore Island, where they find the ancient ruins of a failed resort on top of the even more ancient ruins of a civilization of movers. The comedy holds strong in this DLC, with the absurdity of moving moss covered couches to your truck for no apparent reason other than you feel compelled to do so. If you liked the jokes in the base game, this is simply more of that. 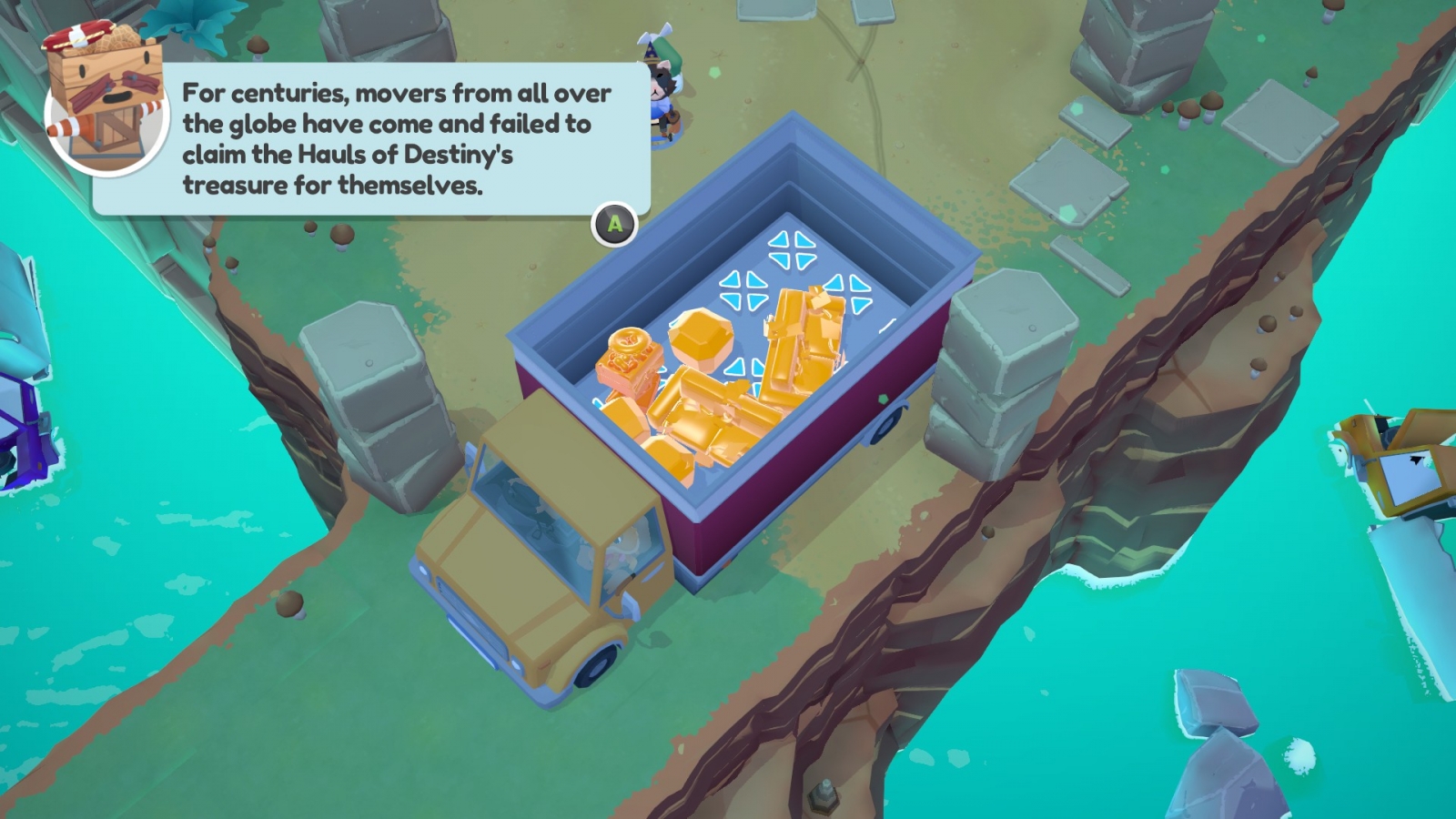 Packmore Island expands on some of the mechanics from the base game, such as transporting furnishings across bodies of water, while adding a few new ones as well, like mystical vines grabbing hold of any nearby furniture. Unfortunately, these new mechanics are where the frustration of playing alone is compounded. To continue using the vines as an example, once they grab hold of an object you need to slap them so they release their grip or continue pulling to break them. I’d imagine it would be easier to do both at the same time, since you can’t tell from the visuals what type of vine needs what, but by myself I had to let go of the furniture to take a slap in the dark so to speak, and if that didn’t work just keep pulling and hope.

In another level, you’re asked to turn some cranks to open doors, raise up platforms, and open floodgates. While it would be much more fun to have one player moving objects while another takes care of the cranks, alone you need to stop the cranks from resetting by blocking them with furniture. This takes a lot longer than having friends, so you have essentially 0 chance of getting gold if you can even complete the stage. This level was where I gave up, since I found no way to fit a large hot tub through the small doorway nor could I throw it over a cliff to the truck.

Basically, while Movers in Paradise looks like it could be pretty fun with a group, my inability to get friends together in time for this piece left me very sour. If you can get 3 or more people to move out with you, I’d definitely recommend checking this out as it seems like more of the chaotic and messy fun of the base game. If you’re alone though, as many of us are in this pandemic, I would pass on this DLC at least for now.

David is the kind of person to wear his heart on his sleeve. He can find positives in anything, like this is a person who loved Star Fox Zero to death. You’ll see him playing all kinds of games: AAAs, Indies, game jam games, games of all genres, and writing about them! Here. On this website. When not writing or playing games, you can find David making music, games, or enjoying a good book. David’s favorite games include NieR: Automata, Mother 3, and Gravity Rush.
Related Articles: Indies
Share
Tweet
Share
Submit