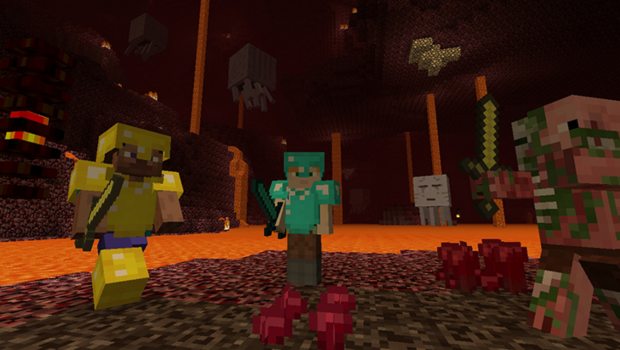 Mojang’s smash hit, Minecraft, is now available for Nintendo’s Wii U. It comes complete with low-res textures, blocky trees and even blockier animals; often referred to as digital Lego, it truly is a game of building and exploring and is totally unbridled from a narrative. Given the game has been available in the market for over five years and almost every other gaming platform, I’m not going to dive into the technical merits of the game, but rather focus on the work that 4J Studios has done in bringing the Wii U Edition to life. I have to say, this game only feels like an excellent port of Minecraft rather than a special Wii U version, but I’m getting ahead of myself.

There are several key editions available for the many versions of Minecraft: there is the most expansive version, available only on PC, which allows connection to privately hosted game servers that include total game modifications like Sky Wars, and many, many extra item types and creatures not available with the game itself. Map size is near limitless, too.

Following that are the last-gen console versions, which contained everything from the PC version proper, but world sizes were restricted. Then there is the Minecraft Pocket edition, which is available on most portable devices, including mobile phones.

More recently the Xbox One and PlayStation 4 received their own versions, complete with franchise mashups, alternate textures and any other content developed by Mojang. These editions offer worlds a staggering 36 times bigger than the 360 and Playstation 3, and both current gen consoles are up to version 1.8.8, bringing a ton of significant updates.

Minecraft: Wii U Edition is a version behind, with a planned update release sometime in 2016. While may be a bit of a disappointment, this is offset by including some of the paid DLC in the package. Specifically, Battle & Beasts Skin Packs 1 and 2, Natural, City and Fantasy Texture Packs as well as the Festive Mash-up Pack are included in the 29.99 USD price.

The biggest drawback to the Wii U edition isn’t its limitation to accessing private servers, or being a little behind the upgrade path; the only significant handicap is that the size of the worlds is the same as the last generation consoles. Otherwise it is identical to every other console Minecraft version out there.

The Wii U is a platform that has definable strengths over other modern consoles, and almost all of them are untapped. You can imagine scenarios where having the tablet controller with a screen could allow players to manage their inventory right on the Wii U screen, without having to bring up a second menu on the TV; or even managing crafting and enchanting using the stylus instead of the obtuse directional pad method. Multiplayer split-screen could also benefit from giving the first player the second screen and the TV to player two, or even having a special design mode using the stylus to pre-build structures with precision and then applying them to the world in a special build mode.

That is all potential wasted, but with that said, there is nothing particularly wrong with Minecraft Wii U Edition. It plays exactly as millions of players would come to expect, and though the game world itself has evolved over the years, it really doesn’t differentiate itself from any other version. The recommendation for buying it really comes down to whether you want Minecraft available on your Wii U.

My Wii U has seen a lot more use with my son badgering me to be able to play Minecraft – and he’s sunk more than a few hours into it already, alternating from sitting in front of the TV to curling up on the couch with a pair of headphones, for which I am grateful, because it means he doesn’t monopolize the living-room for his 8-bit gaming bliss.

In short, if you own Minecraft on another console version and are looking for special Wii U functionality, the only significant advantage is the second screen while playing single player — and while both the PS4 (Vita Remote Play) and Xbox One (via Windows 10) can manage the same, Nintendo’s solution requires no additional hardware.

Born and raised in Winnipeg, Canada, at a young age I was forced to decide whether the harsh northern winters were going to claim my fingers, or to turn to the safer pursuits of indoor activities. Little did I know that a little game called Ninja Gaiden would bring my digits more pain than frostbite ever could. Starting with Vectrex and C64 games and moving forward through the era of electronic entertainment, I sampled as much as I could in the different platforms, and began my interest in PC gaming from wrestling with DOS memory management. While console games were a part of my earliest gaming memories and I certainly had played on most platforms including 3D0, all things Nintendo, PS1 and the like, truly the PC was my domain until the Xbox. As an old PC gamer, I ever chased the cutting edge technology. Eye of the beholder with CGA 4 colors was my first step down the the path of blowing thousands of dollars on PC upgrades over two decades. Ultima 7, with the Guardian talking to me through my monitor, still haunts my dreams and keeps me ever hoping for a decent Ultima 8 and 9. From the 3DFX SLI VooDoo2s and Aureal to today's GPU driven DirectX games, the new and shiny pictures seem to keep me going. My PC gaming has slowed down with the market shift though, and although I have choice games that will ever be on PC, I have found myself in console gaming with a bit of portable gaming in my life. Back around the turn of the millenium (and long before fatherhood), I had fired off an email offering to help Ron with a little-known site called ConsoleGold. Little did I know it would be be a part of my life to this day. While I've seen my fair share of shovelware (thanks Ron!), I manage to try and find the fun in most games. Leaning towards sandbox and action titles, I've grown to love games for their potential to reach art. Console agnostic and excited for the progress of tomorrow, I fancy the latest and greatest, but still enjoy the good old classics ... as long as they've been revamped from their 8bit graphic roots.
Related Articles: Minecraft Wii U Edition
Share
Tweet
Share
Submit