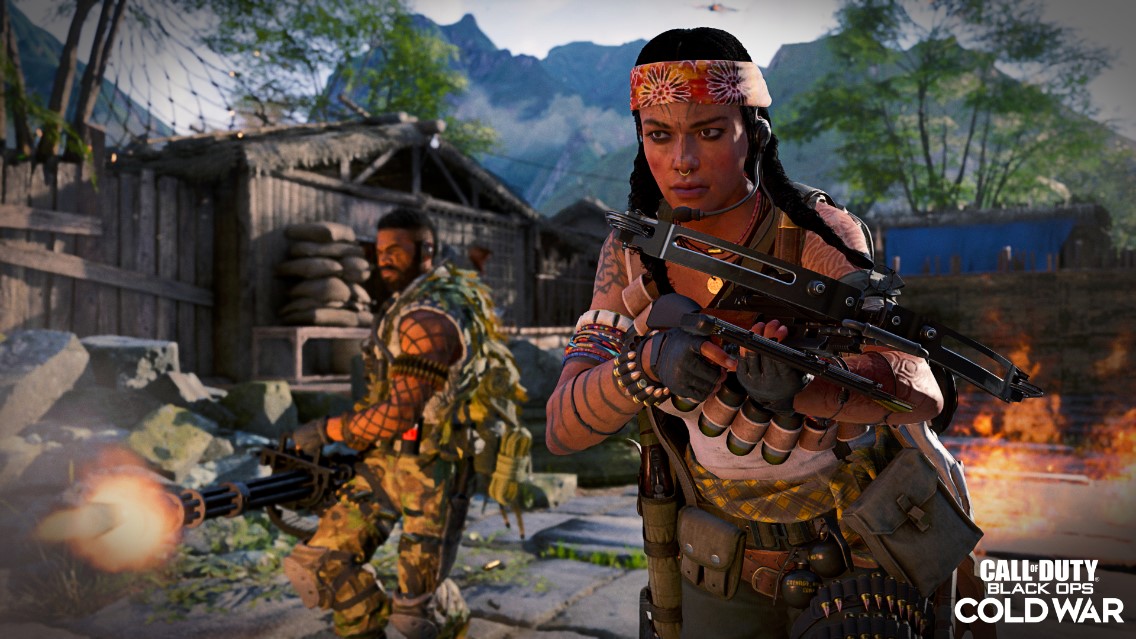 Oftentimes the first season of a TV show is fondly remembered as the best. I know that happened with CW’s The Flash, where it’s use of Reverse Flash is a crowning moment for the series. Others have lackluster starts but come into their own in their sophomore year, like The Office, which starts as cringy as possible, but finds the right pacing after it’s initial missteps. You probably already see where I’m going here, but Call Of Duty: Black Ops Cold War’s second season comes in closer to something like Community, which had a great first showing, and got even better in the second. I’ve been playing for about a week and, while it’s not perfect, Season Two has begun in a phenomenal way.

Let’s start with the weaponry that’s been added to the game. The newest additions are the Fara 83 assault rifle, available at battle pass tier 15, and the LC10 submachine gun, available at battle pass tier 31. Both are free to earn, and both are great additions to the game. Beginning with the Fara 83, it feels like a mix between the AK-47 and the Krig. It has less recoil than the AK but not as quick, and is a little faster moving than the Krig without the pinpoint accuracy, leaving you with something perfectly in the middle. It depends on the map, but it has somewhat taken the place of my Krig and XM4, although I have to switch optics to get the best movement or accuracy.

The LC10 is quickly climbing my list of SMGs to use, and is probably already second behind the AK-74u. While it comes with more recoil and less damage than the 74u, the LC10 with a couple of attachments rounds out to something akin to the MP7 from Modern Warfare, albeit more functionally reminiscent of the MPL from Black Ops. The high rate of fire and seemingly better range than most SMGs makes it deadly in the right hands, and I thoroughly enjoyed my 29-10 Team Deathmatch on Raid with it. It also features something many guns like the Groza are terrible with: fantastic iron sights which allows you an extra attachment slot.

One other “weapon” joining the lineup via scorestreaks is the mini-gun/rail-gun. Titled “Death machine”, my squad and I haven’t had a lot of luck with it. It costs 2200 score, and even though it’s held and directed by the player, we tend to die super quickly as it’s hard to aim. This also could be a result of our playing hardcore game modes, but it does make it a less desirable scorestreak, especially when a sentry turret will only cost 1800 score.

Moving on, there was only one map added at the season’s launch, which isn’t much and a bit sad compared to the six that launched in Season One (although four of them were Gunfight maps). There may be some that don’t like heading into the jungles of Apocalypse, but in my opinion this one is perfectly built. It flows in the classic three lane set up, and doesn’t have a bunch of hiding spots that feature almost impossible to challenge sightlines. Several maps, like Satellite, have frustrating head glitches (cover where they can see you but you can’t see them), but Apocalypse has very few of those positions. There are places where ARs can take advantage, as well as lanes where you should equip an SMG, but this feels like an optimal compact map where either weapon has a place without trashy tactics.

As far as modes go, Black Ops Cold War has added a few smaller multiplayer ones (some coming in-season) along with a huge new Zombies mode. We’ll get into the Zombies addition in it’s own paragraph, but let’s just say I’m extremely impressed with the Team at Treyarch in building such a big addition only a little bit after FireBase Z’s arrival.

Gun Game is a mode many of us are familiar with, but it’s a welcome returning mode. For those unfamiliar with it, Gun Game starts everyone with the same weapon in a free-for-all format, with each kill resulting in you moving up a level to a new weapon. The player reaching the final twentieth weapon kill wins the game, and it’s a private party favorite for my group. It’s fast and frantic, and if you play it like we do with an open party chat, there’s trash talk and laughter abounding.

Now, the Outbreak Zombies mode. I’m simply astounded by what Treyarch has done here. Zombies is a pillar of the Call Of Duty experience, and many players buy the game just to play it exclusively. But the amount of creativity that has gone into Black Ops Cold War’s Zombies approach is truly spectacular.

Outbreak takes an almost Warzone/Fireteam approach to what it’s doing, with a huge open map to run around in. Gone are the doors to pay for to get through, as well as an in-depth storyline, but the trade off of the narrative driven rounds in favor of running around randomly doing crazy things with friends while shooting zombies is a fun concept. While the intensity is something that makes classic Zombies and Onslaught a blast, this unique twist allows you to operate at your own leisure, although there will be several moments like during the actual objective and exfiling where everything goes to eleven.

You do have an option when the time comes to either exfil after you finish an objective, or travel the Dark Aether portal to another open world map section. There are three unique ones in the Ural mountains, the snow covered Alpine, the farmlands of Golova, and the wooded area of Ruka. Each time you drop in you’re going to have a different objective, with the possibility of taking out a boss zombie, surviving for a short time waiting for a bomb you placed to go off, defending a machine, escorting a rover, or taking canisters of crystals to a rocket that will take them away from the area. None of these are going to feel new to you, in fact, we’ve probably done similar things in other games, but the way they’ve been integrated into this experience feels fluid. 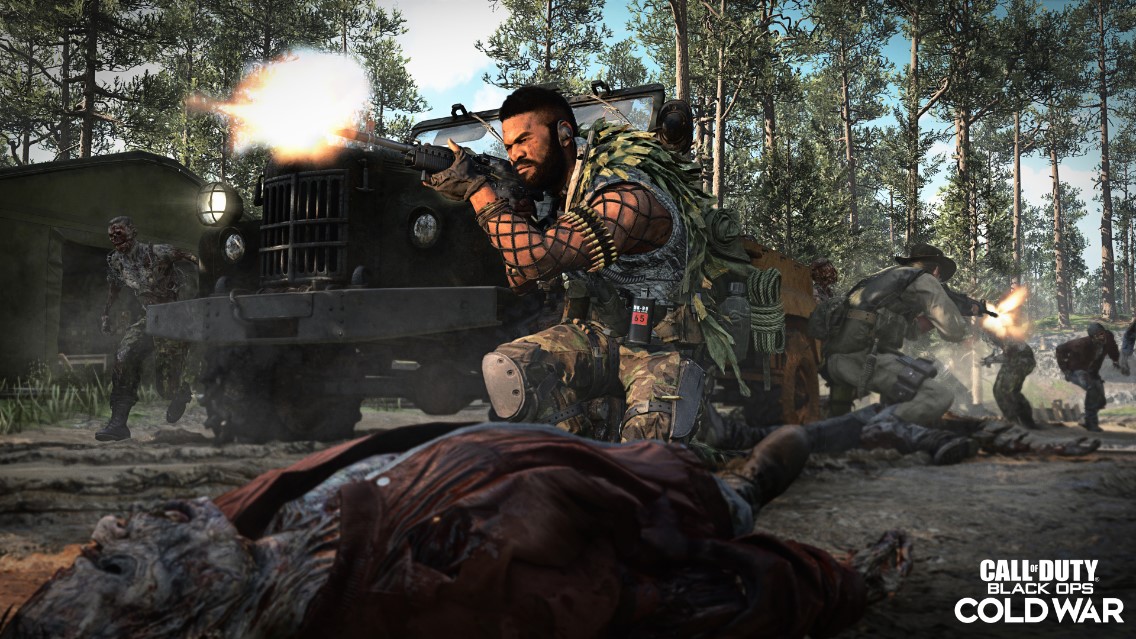 The best part about all of this is that you aren’t going at it without any help. Up to three friends can join, and you’ll be able to find weapons on the walls or ammo caches to buy like in classic Zombies, as well as come across loot boxes like in Warzone. There are even cars to drive around in, which definitely come in handy for the jaunt over to the objective or exfil, and jump pads you can use to glide around using your parachute. Treyarch obviously didn’t forget the heralded Pack-A-Punch, and you can also buy plenty of perk sodas and upgrades at the Arsenal station before clicking the button on the terminal to exfil or continue on.

Yes, there is a lot Outbreak is doing, and it’ll be interesting to see if it can keep people engaged for a long period of time, but what the Zombies team has accomplished here cannot be understated. They’re taking existing ideas from both their own games and others, fusing it with Zombies, and managing to make it feel enjoyable and not just a retread. My hat is off to them, and I look forward to how they continue to support the mode.

Now I can’t end this impressions piece without talking about the battle pass itself. Once again, there are another one hundred tiers to earn for paying customers with over twenty available for free. There are some really good items in this one as well, with highlights including the Tactical Roll Finishing move, the First Mate MP5 blueprint, and plenty of others. There are also several really cool reticles, even if I don’t generally use them. This is still a deal to purchase, as 1300 COD points means you could buy it once and as long as you earn a decent portion of the pass you’ll be able to pay for the next one.

The true winning part of this battle pass and season is the return of reactive camos. This has been something players have loved since its introduction to Black Ops 4, and have been calling for it after its omission from Modern Warfare. To catch you up if you aren’t acquainted with reactive camos (like I wasn’t), these generally have a killer design which changes the more kills you get. There are several stages for each one, and they get either more intense or more highly detailed the further you go. It’s just a really cool idea, and I’m glad to see it return, both with Tier 95’s Vulture Exo camo for the Fara 83, and purchasable in bundles, like the Dead Ops Arcade Reactive (shown above).

In summation, Season Two of Call Of Duty: Black Ops Cold War is a great way to start. While I’m a bit disappointed that only one 6v6 map is available to start, the two new weapons are phenomenal additions to the armory, and reactive camos are bound to excite both veteran and rookie players. The biggest inclusion has to be Outbreak mode, and it’s unbelievably large amount of replayability should keep players busy while they wait for mid-season content drops. This is only the beginning, and if Season Two shapes up anything like Season One we have some major surprises on the horizon.