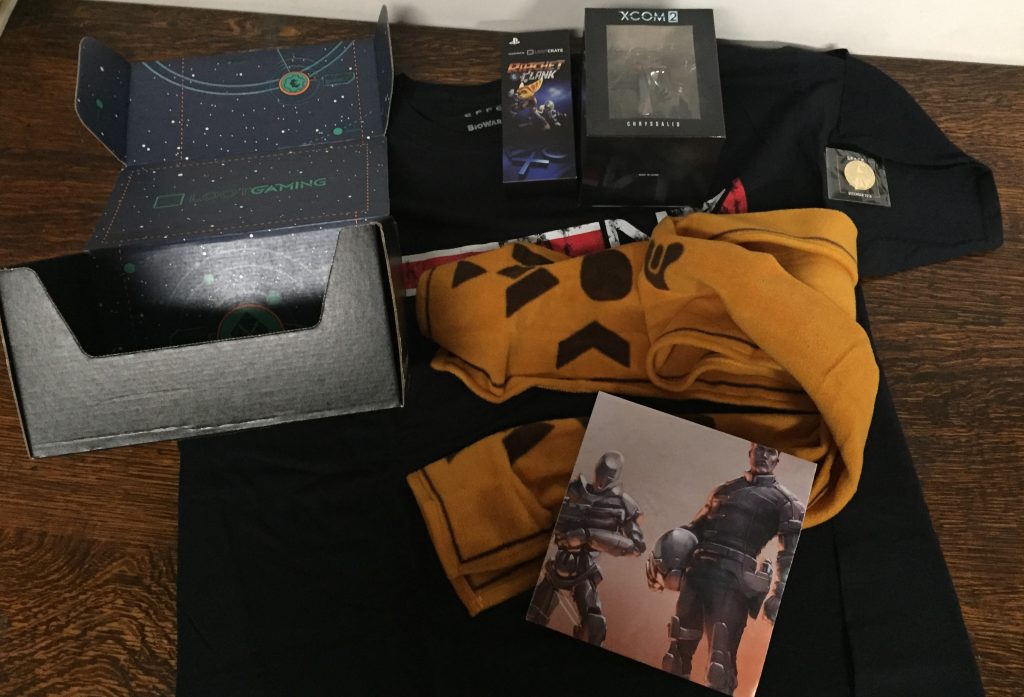 Let’s get this out of the way: I’m not what you’d call the target audience for ‘mystery loot crates.’ To start with, I hate mysteries. In fact, almost everyone hates mysteries, which is why we have whole industries and fields of study devoted to getting rid of them once and for all. The only people who like them tend to travel around in vans while asking their dogs to give them advice, and I’ve watched just enough Court TV to give them a wide berth. Beyond that, I hate spending money. Think of me as Scrooge McDuck from Duck Tales, except vastly poorer, I have no nephews, no scottish accent, and I’m not a duck. The point is, take the overlapping Venn Diagram circles which Loot Crate’s marketing department will show in a Powerpoint slide, and I’m off in a completely unconnected circle with a frowny face on it and the words ‘Forget It’ written underneath. Nothing against those of you who like having The Themed Unknown shipped to you now and then; I’m just telling you where I stand.

And yet, a few days ago, a package from Loot Crate showed up for me. So here I am with one less mystery in the world, here to report my findings.

Framing this properly: this was a Loot Gaming crate from the guys at lootcrate.com, who specialize in this kind of Monthly Mystery thing across several genres. They’ve got Loot Gaming, Loot Anime, Loot Wear, Loot Pets and more, so apparently I’m in a considerable minority when it comes to my distaste for the unknown. On top of the ‘Gaming’ theme, they also narrow things down a little bit – this time around, ‘Space’ was the secret word of the day, which come to think of it doesn’t narrow things down at all. (Hint: ‘Space’ is where almost everything is located.) I was barely aware this thing was arriving, so I didn’t get much of a chance to bask in the magical wonder of imagined possibilities. Thank God.

Anyway, the box showed up, and I opened it and… actually, let’s rewind a bit. The box? Actually kind of nice. I mean, this wasn’t an off-the-shelf-at-Staples brown cardboard box. Loot Crateeven made the box space-themed, which is a nice touch. Sturdy too, though it better be since they shipped the mysteries in it directly, and did a marvelous job of protecting them during the Christmas season. So, the box opened up, and inside was a bunch of very neatly arranged loot – just like the site promises. Not only that, but it came with a poster which showed something thematically appropriate on one side (easy – remember, it’s ‘Space’), while listing and describing the contents on the other. Think of it as an optional spoiler for your box of unknowns, so naturally that was the first thing I went for.

Let’s have a look!

Not gonna lie. Still supremely impressed at the box. The shirt wins this one, though.

An X-Com Chryssalid figure, a Destiny scarf, a Mass Effect T-shirt, a Space Coin Pin, the Ratchet & Clank Omni-Wrench Pen, a code for Dubwars, and a chance at some humongous Mass Effect: New Earth loot. I’m not sure I won, so technically this is another mystery, but thankfully I’m a pessimist so I can report that I did not win and there’s no mystery to be had. Ha! Take that!

Anyway, this is a decent smattering of neat stuff. I haven’t given Dubwars a proper try yet, so I can’t testify to that. I’m an old-school X-com fan, so the Chryssalid figure actually occupies the vicinity of ‘nifty’ in my book. The space coin pin? C’mon, I don’t need a decorative collectible to commemorate this – I’m flinging it into the first wishing well that seems like it may house an easily duped genie. And that pen? It is dramatic, even inspiring, in how it manages to get as far away from ‘being a pen’ as possible. Better to think of that one as a Ratchet and Clank weapon that smears ink on the enemy. The scarf is actually quite nice, but I don’t wear scarves so that will be a cat toy the moment I find a cat. The shirt’s a real nice touch, since you can pick sizes all the way up to 3XL – and as any guy who’s eyeing the end of the size option knows, getting a shirt that actually fits comfortably is welcome.

I’m letting my cynical side show here, but to the credit of Loot Crate, they deliver what they promise. This is a neat, eclectic assortment of stuff fitting a theme, all gaming related. Slickly packaged, and most importantly, it’s a selection of things that a gamer is less than likely to have sitting around on their own – unless they’re a habitual collector of gaming knick-knacks as is. In which case, perversely, the Loot Crate experience only gets more enticing, not less. This is also a reasonably unpredictable set of merchandise, so even if there’s something in here that you don’t want, well… then what you actually received is a gift you can give to one of your friends. Look on the bright side, right? And if they’re one of those people who loves surprises (ugh), you can even put the item in a box first, which every Loot Crate conveniently comes with. They’ve thought of everything.

Just pretend it’s not a pen and everything will be okay.

So, there’s the Loot Gaming crate for 12/2016. Did it manage to win over my heart? Show my the error of my ways with regards to the mysteries of the world? On the upside, this was a pretty neat selection of stuff. A nice shirt, a cool X-com toy, a game code, a scarf? Put those in the ‘win’ column, with the Ratchet and Clank toy technically being added so long as we forget its intended function. The pin, kind of an afterthought at most. At $24.95 plus shipping and handling? Most people would say, reasonable enough. But I’m a cheapskate who hates mystery, so the odds of me laying out cash for this willingly is a bit more distant. For those of you who love surprises, who have a bit more cash to burn, or who are trying to find a gift for a gaming friend? This may be more up your alley.