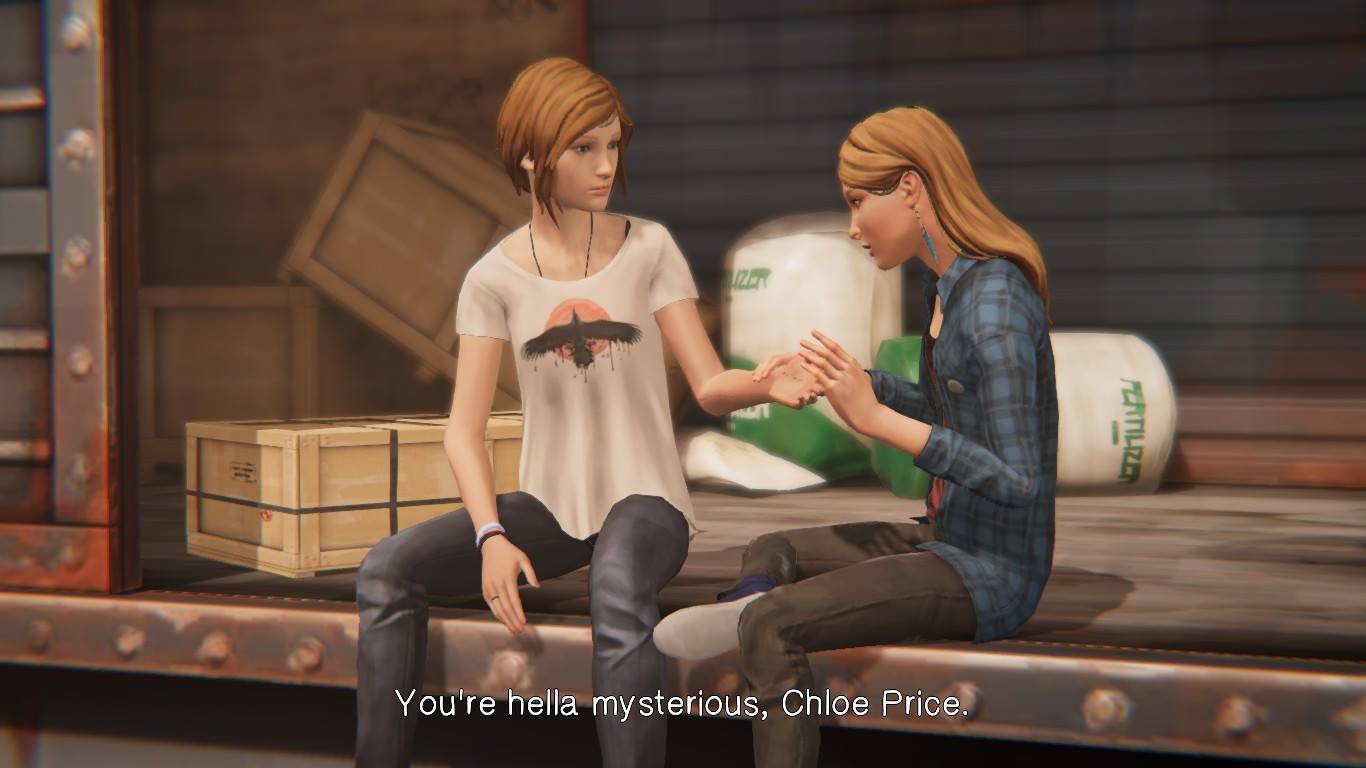 Chloe Price stands on the railroad tracks, peacefully waiting for the bright lights and thunderous rumble that mean a train is approaching. She stares it down, lit cigarette in hand, and at the last possible second she casually hops out of its way. It’s the middle of the night and she’s heading to an abandoned mill for a secret show by one of her favorite bands; her mother has no idea where she is, and Chloe prefers it that way.

Before the Storm is the prequel to the much-loved 2015 game Life is Strange about reunited best friends and the supernatural occurrences that surround them. In Episode One, Awake, we’re thrown right into the action, witnessing the Chloe who only recently lost her father and is beginning to fall apart. Then she meets a whirlwind of a girl named Rachel Amber, and things seem to take a turn for the better.

Though Life is Strange was made by Dontnod and Before the Storm is the work of Deck Nine, this game has the same setting, art style, and cast of characters as the original. The soundtrack is a mixture of licensed songs and music composed by the band Daughter specifically for the game. Their subtle melodies are beautiful and full of feeling, accentuating every scene.

Instead of turning back time to alter events or dialogue, a new mechanic has been introduced for Chloe called Backtalk. It involves getting into arguments, as only Chloe does best, and using people’s own words against them to get what you want. You “win” the Backtalk challenge with a string of successful comebacks. Want to get out of a meeting with the principal or put down your mom’s shitty new boyfriend? Just go on a verbal tirade and your problems are solved!

Like the first game, Before the Storm is very much choice-based, with the ever-familiar “this will have consequences” symbol popping up on the screen after you take an action or follow a tangent in conversation. Some story moments take place in cutscenes where you can’t influence the outcome, but most of the time you can choose how to respond to situations. For instance, while I was playing, I tried to react to David Madsen’s condescension or Victoria Chase’s catty comments how Chloe would, not necessarily how I would. You’re free to forge your own path, though.

Chloe’s diary and cell phone are available for perusing in between cutscenes. The journal entries are addressed to Max Caulfield, the friend who disappeared just when Chloe needed her most. These sometimes snarky, sometimes heartbreaking letters, along with the text message exchanges stored in her phone, add further context to the story.

Other extras this game features are outfit packs, achievements, and the mixtape zen mode. You can select what clothes you’d like Chloe to wear in her bedroom, but so far they seem to be just for fun and not something that has an impact on what happens. You can earn achievements by busting out Chloe’s fat black marker and turning whatever’s on her mind into graffiti. While Max had photography, Chloe has vandalism. It hasn’t gotten her in trouble yet, so it’s a tad unrealistic, but you can choose between two different phrases in most spots you tag which offers amusing results. The mixtape mode seems to unlock songs from the soundtrack as you play. Put them in any order you like, then listen to your mix while Chloe chills in her room.

Before the Storm features completely different voice actors for all of the characters, from Chloe and her mom to rich kid Nathan Prescott and enigmatic drug dealer Frank Bowers. As someone who obsessed over the original Life is Strange for months, this was very hard for me to get used to at first. Some of the replacement voice actors are spot-on, and the new characters made the transition easier, but it took a while for Chloe’s performance to be believable.

However, this game does capture the spirit of Life is Strange with its excellent writing and emotional depth. Though it’s only the first episode, it already made me cry thanks to a certain moment with Chloe in the junkyard. It’s a chance for me to retread old territory through new eyes, but even total newcomers will feel the tugs at their heartstrings.

If you’re new to the series, Before the Storm is simply a story about a high school girl dealing with enormous changes in her life and falling in love. If you’re a returning fan, you’ll be stoked to see the story-behind-the-story unfold and discover every little detail the developers put in. Awake is an intriguing opening episode, and I’m curious to see where this game goes.

Sarah Marchant is an office admin for a nerdy t-shirt company. She has a soft spot for indie games, a passion for story-driven titles, and a weakness for cooking games and anything with zombies.
Related Articles: Life is Strange: Before the Storm
Share
Tweet
Share
Submit