When I reviewed last year’s Yakuza: Like a Dragon, I didn’t get to spend a whole lot of extra time with it due to so many games coming out around that time. As I’ve slowly worked my way through the rest of the game though, I stand by that initial opinion: this game is fantastic. My biggest regret though is calling the game episodic in nature, when that only holds true for the first few chapters and the rest of the story revolves around the clash between two criminal organizations, usually the Omi Alliance and someone else. Oh, and I never got to talk about the cracker business Kasuga can become the CEO of, which is another incredibly addictive minigame and how you make most of your money. Now that I finally have the chance to rectify those mistakes, we can get into the real reason you’re here: the PS5 upgrade.

Like a lot of PlayStation 5 upgrades, such as Spider-Man: Miles Morales, you have two modes to choose from: one that prioritizes framerate, called Normal, and one that prioritizes resolution, aptly titled High Resolution. While Yakuza 7 was locked to 30 frames per second on PS4 and even PS4 Pro, playing in Normal mode will bump that up to a mostly consistent 60. I say mostly consistent, as exactly once during my playtime so far in this version Adachi’s animation glitched out and he rotated his head a full 360 degrees vertically. Creepy. Save files unfortunately don’t transfer from PS4 here, so I’ve had to start the game over and can’t confirm if these kinds of glitches continue to occur or if some of the more intense areas drop the frame rate at all. In the opening hours however, it works perfectly. 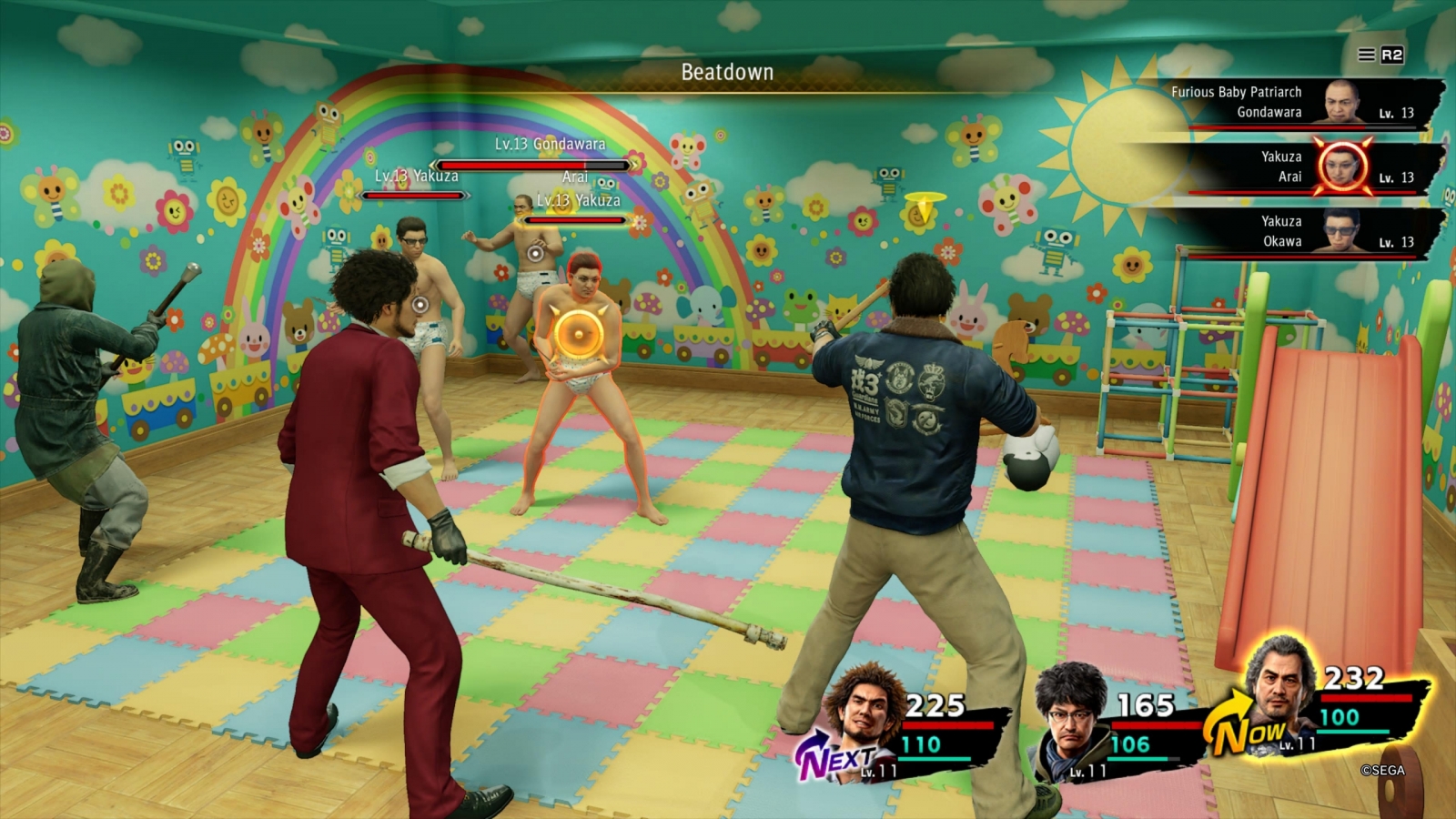 On the flip side, I actually preferred to play mostly in Resolution mode. It may partially be me wanting to see what my shiny new console can do, but already being used to 30 fps along with the game being a turn based RPG I appreciated the extra detail this mode added. It’s not a huge difference, but everything looks just a smidge better. Faces appear more realistic, puddles on the street reflect slightly more, and the lighting looks more natural. The UI, surprisingly, receives the biggest upgrade in this mode and it’s immediately apparent when you switch over. Lines look far cleaner and more consistent, it’s like the difference between working with vector graphics and rasterized, for you digital artists out there. The higher framerate doesn’t help much with the odd input timings for some attacks either, so I’ll stick with High Resolution mode. Regardless of what mode you choose, you can enjoy this wacky RPG at a better quality than was possible on PS4, with Normal mode running at 60fps and 1440p and Resolution mode at 30 fps and 4K.

This upgrade is free to those who own the original, though as stated earlier you cannot transfer your save, which is a bummer after reaching around chapter 10. There are also disappointingly few changes to further improve the game, Like a Dragon takes almost no advantage of the DualSense controller. No adaptive triggers, enhanced rumble, even the quality of sounds coming from the controller’s speaker remains unchanged. The only thing I can think of that’s even slightly different is the new lightbar surrounding the touchpad, which simply mimics the one on the PS4 in a different place. It’s a shame, but the game never really used these things in the first place, most of the action uses the face buttons. Even so, I plan to start my playthrough over for the better visuals alone, and the loading screens being obliterated by the SSD is a nice bonus too. The game was already gorgeous and a ton of fun, so I’m happy to go through most of the adventure again for these enhancements.

David is the kind of person to wear his heart on his sleeve. He can find positives in anything, like this is a person who loved Star Fox Zero to death. You’ll see him playing all kinds of games: AAAs, Indies, game jam games, games of all genres, and writing about them! Here. On this website. When not writing or playing games, you can find David making music, games, or enjoying a good book. David’s favorite games include NieR: Automata, Mother 3, and Gravity Rush.
Related Articles: Yakuza: Like a Dragon
Share
Tweet
Share
Submit