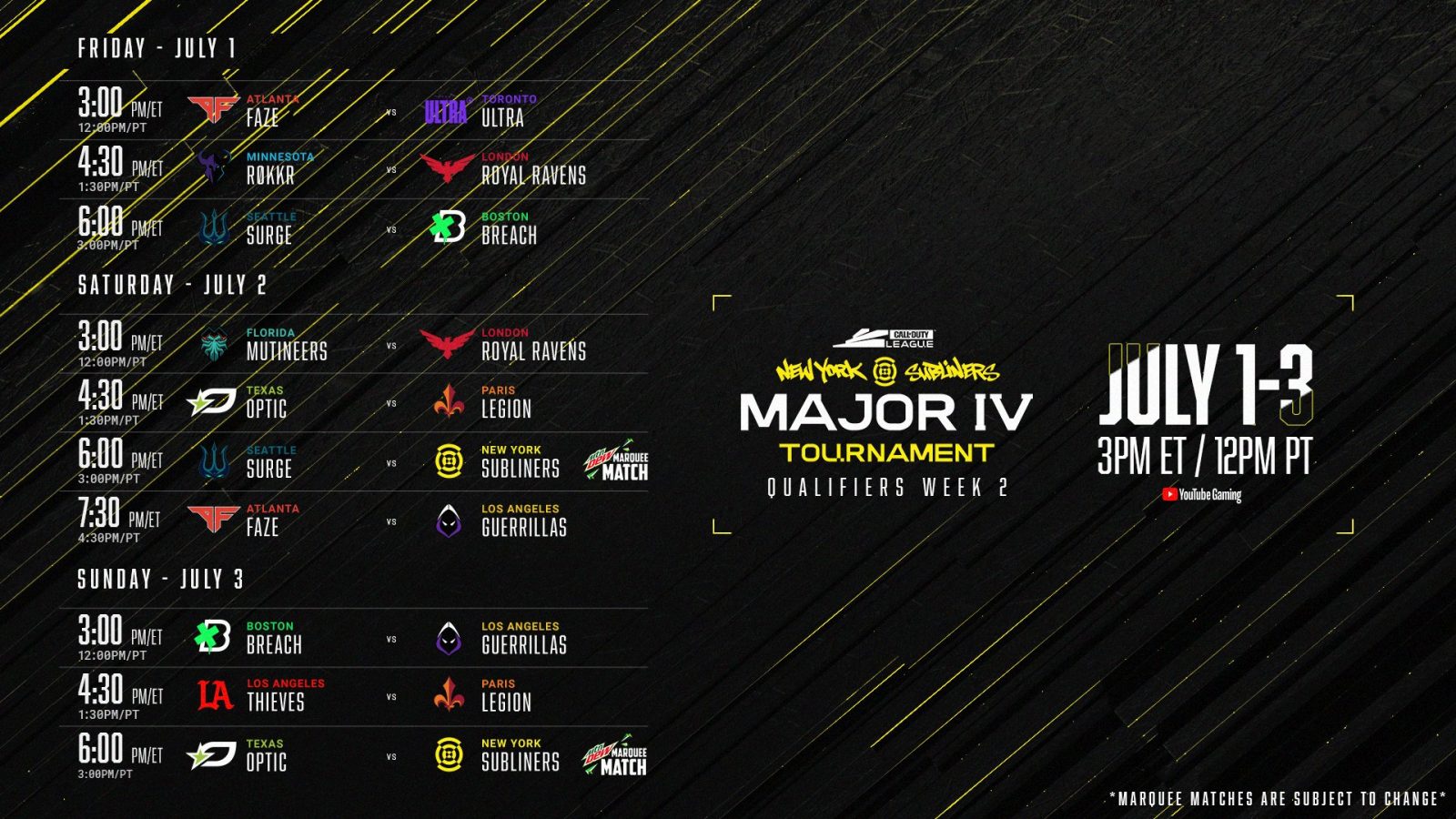 Wow, this was quite a July 4th weekend in the Call Of Duty League. We’re watching teams fry, fall apart, and missteps that may cost some a shot at Champs. Given my busy holiday, I’ve only just now caught up with everything, both watching matches and catching up with The Flank (shout out to Zooma, go vote for the guy for eSports Content Creator of the year here). With that in mind, we’ll be talking about what happened for each team below, but in Power Ranking fashion.

While the loss to LAG is a bit concerning, this team is still at the top of their game. They just have had more bad days in Vanguard than we’ve seen since the team formed for the inaugural Modern Warfare CDL season. They also played some of their worst maps to intentionally build their map pool during this one. Beyond that though, we saw Simp take over in the other match versus Toronto, and if Faze want to push to a fourth Grand Finals they’ll need him to do that more consistently. He’s one of the few players in the game that can literally control the outcome of a match, and while Cellium has been important to their dominance, Simp is to an even higher degree.

This is one I feel like I’ll regret, but New York is undefeated and they’re playing so ridiculously well during this stage. Admittedly, they have to, with a shot at Champs completely dependent on the CDL points they can collect. That being said, you play who’s in front of you, and this squad isn’t looking too far ahead and beating everyone in their path. Hydra has controlled the map, Kismet has had major slaying moments, and PaulEhx keeps being one of the hardest kills in Call Of Duty. Put all that together with Crimsix keeping them in check, and they might just make a run at their home Major. First things first though, they have to win a match on LAN when it counts – they haven’t done that yet.

Most would probably still throw Optic in top 2 because of iLLeY’s return, but you can’t base everything on potential. This team still has a ways to go, and they have to hope they can recapture the teamwork that got them a Major win this year. It’s not going to be easy though, because they’re playing catch up while every other team is smoothing out the bumps. The SMG duo has to play like the superstars they are though, because Scump and Shotzzy can’t keep being so inconsistent.

I called it out in our last Power Rankings, my worry was that this team could be a bit shaky. They made it to the mountaintop last Major, but that just means you have a bigger target on your back. They are 1-2 headed into the final week, and while the New York series wasn’t a surprise, getting beat up by Boston certainly was. There are a bunch of mental mistakes showing up again that we saw during Major I and the Major II, so hopefully they can get those things figured out. The one positive to take away so far? Pred is playing at an MVP level, so getting back to their winning ways may be easier to fix than before.

Another thing I called in our previous Power Rankings, Gismo absolutely changes this team. We still need to see if they can carry everything over to LAN, but allowing Zero to go back to Main AR as well as Gismo’s pace makes this squad a powerhouse. The aggression they’re afforded in this move gives them a lot of confidence, and you can see it in their teamwork with how much they trust each other. It’s also nice to see Gismo very quickly rounding back into the form that had him at the top of the rookie rankings at the beginning of the year; he was frying versus Minnesota.

Just when you think Boston is out, they turn around and do this. They beat Optic last week, then fell on their face versus LAT. This week they were out for blood, shredding both Surge and the Guerrillas on the way to a 3-1 standing in the Major IV qualifiers. Things couldn’t be going any better for Boston; they’re winning some games we didn’t expect and those thirty CDL points could be the difference for them in keeping the fifth seed. In any case, 160 may be just enough to be locked into a spot for Champs. Also, not only has the move for Vivid been phenomenal, it’s unlocked Nero’s potential. If this duo can stay consistent, they’ll make noise at Major IV.

This is yet again a tough read for a team that always seems to be in a game but you don’t trust them to win them. They blew away both Paris and Boston (Paris was expected), but got trashed even though they played Atlanta Faze seemingly tough in a 2-3 loss. One thing is for certain, the next two matches will tell us a lot about them and possibly move them up in the Power Rankings. They’re up against Florida, which should be an easy win, and then the big test versus the Subliners. If they take both, they can make a big run. If they somehow lose to Florida however… assume they’ll stay as inconsistent as ever.

I really really wanted to keep Toronto higher, but just like Optic you can’t rank on potential. This is one of the only rosters not to make any changes so far during the season (beyond illness requiring it), and for a good reason. But even still, they have not fully unlocked their potential beyond the run we saw during their home Major. They’ve looked extremely shaky during this stage, mimicking their poor play from earlier in the year. Worse still, if the SMG duo of Bance and CleanX can’t get things going in this stage, we’ll be questioning if this squad can really challenge the best of the best during Major IV and beyond.

Minnesota may be one of the most disappointing teams at this point of the year. The move for Havok was brilliant, and he’s certainly paying dividends along with Attach at flex. But there’s still something off about them, whether it’s just learning to play together or not having a natural Main AR. I rag on Priestahh plenty, but he’s been very inconsistent throughout the Vanguard season and I don’t know why he hasn’t been replaced. There are so many Main AR’s on the market that would make this team better. No matter how you slice it though, getting beat by London really hurt their chances of making Champs. They’re losing the most important games right now to the teams they can’t afford to.

They’ve tricked me for the last time. I’ve constantly put eggs in the Florida basket, and every time they do something that makes you think they’ve figured it out, they crap the bed. They did what they needed to do last week, at least in one game, beating Minnesota handily to keep their shot at Champs alive. But right after that they followed it with a lackluster effort versus London, who while good are still smoothing out their teamwork, even if you didn’t see a need for that versus the Mutineers. Truly it comes down to this – Florida as a team is not set up to compete with other rosters. The pieces don’t fit, they’ve got three ARs on this team, and they dropped a fantastic SMG in Vivid for a rookie who looks overwhelmed, evidenced by 2Reals .63 KD in the London match. This team won’t make it to Champs, mark that down.

Too little, too late. They managed to get a win none of us expected, beating Atlanta Faze handily in a 3-1 victory. But to follow it with the stinker they laid versus Boston? It’s just a bad look. This squad can still make Champs, and they’re kind of getting lucky breaks right now. But they have to stop dropping the games they should win. A victory versus London would be huge in keeping Florida, Minnesota, and New York off their tail heading into Major IV, especially with there being a big chance they’ll start in the loser’s bracket.

#FreeTemp. What is there to say at this point? Temp looks to have quit via what we saw on Twitter. They’re 2-20 this year (or 2-21, can’t remember). If I own this team, I’m firing everyone in management and starting fresh in the Vegas move. Of course, the owner/org could be the problem. If that’s the case… I’m sorry Legion fans. Nothing’s changing anytime soon no matter who’s on this team. You could get Simp or Shotzzy and it would look this bad. Not that something like that would ever happen, did you hear from Kismet about who they passed on, along with the previous reports of rookie phenoms they could have had?