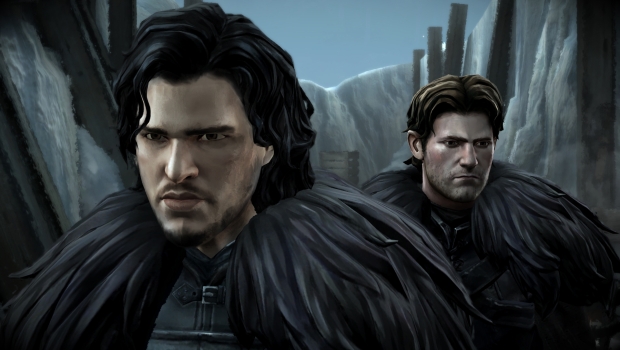 Your journey in Telltale’s Game of Thrones Episode two begins three days after the liberation of Yunkai by Daenerys Stormborn of House Targaryen.  Like episode one and the namesake show, the story doesn’t end there, walking us through the continued (and oft-maligned) story arc of several members of House Forrester. Gared Tuttle was banished to the Wall, Lady Forrester has sent her brother Malcom Branfield to fetch Asher Forrester, the second-born of the House, from his exile in Essos, and a man once thought dead returns home.  If there is anything you can expect in Game of Thrones, it is the unexpected. As before, I’ll not spoil it for you, but suffice it to say that if you are a fan of the show or books, you know exactly the sort of depravity that awaits you in Westeros.

The name of this episode is The Lost Lords, and it’s no misnomer.  In addition to the members of House Forrester I mentioned, you’ll also run into John Snow.  Voiced by none other than Kit Harington, his lines are delivered with the melancholy of a man resigned to a dour and grim duty.  Joined by Peter Dinklage who returns for Episode two as Tyrion Lannister, the writing for The Lost Lords is a little more lively than the setup presented in the prior episode.  Clocking in at about 90 minutes of gameplay, Episode two has Telltale hitting their stride.

Given that it is Game of Thrones, you can expect sinister agents around every corner.  Like the show, friends will become allies, allies will become enemies, and even a simple decision to partake in a little bit of ill-gotten wine can cost you social standing or even your head.  It is in this way that the writing of episode two sets its tension early and sustains it throughout.  Few games master their atmosphere this thoroughly.

Where episode one took place directly after the Red Wedding (the ninth episode of season three), episode two takes place just prior to the Purple Wedding (Season 4, episode two).  If you don’t know what those things are, I’m not going to help you beyond saying you should immediately stop reading this and go watch the show.

I am the sword in the darkness. I am the watcher on the walls.

Episode one had a few framerate hitches, even on my relatively powerful MSI GT70 laptop, but it seems that either driver or engine work has smoothed that out entirely.  The art style still leaves a great many rough textures, (especially the skin on characters’ arms), but it still matches the aesthetics set forth for the series.  John Snow’s character model is spot on, capturing his moody demeanor perfectly.

There are two remaining issues that I expected to be solved by this point — texture tearing and audio glitches.  I mentioned both in my writeup for Iron From Ice.  Thankfully, the echo problem and stuttering has been resolved, with only what appears to be minor rewrites where character speech doesn’t match the subtitles remaining. Texture tearing is still still present throughout, but it does appear to have been toned down a bit.  If the technical progress from episode one to two is any indication, we should see those ironed out shortly.

The liberated city of Yunkai looms large in the distance

The Lost Lords ends with a beautiful song written for the game that could have easily been from the show, closing an episode that strikes a great balance of interactive storytelling and action.  As before, the decisions come fast, and force you to make split-second choices that will have far-reaching consequences.  Like every episode of the show, the credits rolling just made me even more excited for the next installment.

Game of Thrones: A Telltale Games Series will be released episodically on Xbox One, PlayStation 4, PC, Xbox 360, PlayStation 3, OS X, iOS, and Android.

Ron Burke is the Editor in Chief for Gaming Trend. Currently living in Fort Worth, Texas, Ron is an old-school gamer who enjoys CRPGs, action/adventure, platformers, music games, and has recently gotten into tabletop gaming. Ron is also a fourth degree black belt, with a Master's rank in Matsumura Seito Shōrin-ryū, Moo Duk Kwan Tang Soo Do, Universal Tang Soo Do Alliance, and International Tang Soo Do Federation. He also holds ranks in several other styles in his search to be a well-rounded fighter. Ron has been married to Gaming Trend Editor, Laura Burke, for 21 years. They have three dogs - Pazuzu (Irish Terrier), Atë, and Calliope (both Australian Kelpie/Pit Bull mixes).
Related Articles: Game of Thrones: A Telltale Series
Share
Tweet
Share
Submit