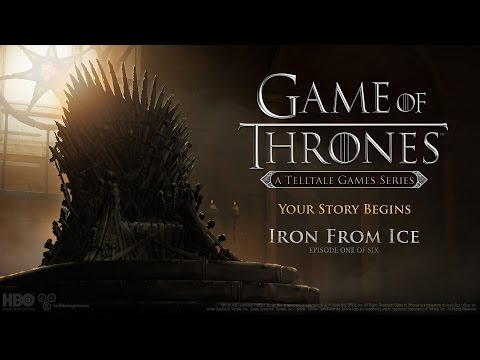 Cercei Lannister once said “When you play the game of thrones you win or you die. There is no middle ground.”  I didn’t have that in mind when I started playing the game, but true to the show and the books, when I finished this chapter my only response was an audible gasp. My mind was absolutely blown.

If previous Telltale Games titles left you feeling like they started off a little slow, you won’t feel that way here.  For those of you who are not caught up on either watching or reading Game of Thrones, you might want to exit this review right now – while I won’t be giving up plot spoilers on the game itself, I will be setting some scenes for timing of when this game occurs, and the circumstances you’ll be facing.  Get caught up on the show before you play this game.  While it isn’t necessarily required, you will get a lot more out of it if you do.  I’ll be doing similar write ups to this until the final episode is released, when I’ll issue a full review and score.

Cercei Lannister is, quite possibly, the most dangerous person in Westeros.

Game of Thrones Episode 1: ‘Iron from Ice’ opens on the evening of the Red Wedding.  You play Gared Tully, a young squire for House Forrester.  Your liege, Lord Gregor Forrester, settles in with his men in the tents outside of the Twins of House Frey, indulging in wine and frivolity the night offers as the King in the North weds his beautiful bride, Talisa Maegyr.  As the events of that evening unfolds, your story begins.

In a big change from their usual format, Game of Thrones is set up not unlike the books, with each chapter focusing on, and allowing you to play as, various members of House Forrester and their associates and confederates.  You’ll guide each of these characters through the tough decisions they have to make, just as you did in other games from Telltale.  But this is Game of Thrones — you won’t be deciding who cuts their hair short, or who gets the crackers or chocolate.  Here, every decision you make is tense and is often the difference between life and death.  The game stays very loyal to the source material.  It ratchets the tension up and blows your mind in the same way as the show, never shying away from the brutality and language we’ve come to expect.

Lord Forrester and Gared share a brief moment after battle

Game of Thrones, similar to The Walking Dead and the recently-released Tales from the Borderlands (you can read our write up on the first chapter here) features a very specific watercolor-esque art style.  You can get a decent idea of that style below in the launch title that kicks off the series.

As you can see, the team has masterfully captured the major characters from the show.  The slightly upturned lip of Margaery Tyrell, Tyrian Lannister’s smug brilliance, Cersei Lannister’s piercing scowl, and Ramsay Snow’s wild eyes are all rendered in perfect detail while still preserving the signature art style.  The new characters introduced in this game from House Forrester are equally as well-rendered.  All of that said, the game does come with some jagged edges (even at 1080p and with Anti-Aliasing turned on), as well as some muddy textures.  It’ll certainly scale to the bevy of platforms Telltale will release this game on, including mobile and portables, but keep your eyes on the action – the backgrounds are a little jagged.

Because it’s Telltale and Game of Thrones, of course I played through the entire game twice (and I know I’ll end up doing it again), but I did encounter a persistent set of audio glitches.  There are some points where the game echoes and shouldn’t, and some characters had some issues with stuttering.  Hopefully these will be patched eventually, but it does break immersion a little bit.  That said, the music in this game is easily on par with the cinematic and beautiful music of the show.   Even better than that, though, Game of Thrones veterans including Natalie Dormer, Lena Headey, Peter Dinklage, and Iwan Rheon lend their voices to this first chapter, giving a great deal of authenticity to their scenes.

As I said earlier, this game takes you through the perspectives of the various members of House Forrester.  Playing as Ethan Forrester, you’ll help your family pick up the pieces from the loss of their liege.  Ethan is only a boy, and far too soft to lead a house into battle.  His sister, Mira Forrester, is in the viper pit that is the Red Keep in King’s Landing with her own dangers to face.  Gered Tuttle is handed impossible decisions that no knight should face, much less an unseasoned squire.  While House Forrester may be not be one of the big houses, their decisions, who they choose to surround themselves with, and how they conduct themselves in the face of mortal dangers feels as important as any you’d find in House Lannister, Tyrel, Targaryen, or Stark.

As the credits rolled on this first chapter, my jaw was on the floor from the incredible conclusion.  Telltale has mastered the art of interactive and compelling storytelling. If this chapter is any indication of the writing we can expect to see in the next five episodes, we are in for an amazing game.

Game of Thrones: A Telltale Games Series will be released episodically on Xbox One, PlayStation 4, PC, Xbox 360, PlayStation 3, OS X, iOS, and Android.

Ron Burke is the Editor in Chief for Gaming Trend. Currently living in Fort Worth, Texas, Ron is an old-school gamer who enjoys CRPGs, action/adventure, platformers, music games, and has recently gotten into tabletop gaming. Ron is also a fourth degree black belt, with a Master's rank in Matsumura Seito Shōrin-ryū, Moo Duk Kwan Tang Soo Do, Universal Tang Soo Do Alliance, and International Tang Soo Do Federation. He also holds ranks in several other styles in his search to be a well-rounded fighter. Ron has been married to Gaming Trend Editor, Laura Burke, for 21 years. They have three dogs - Pazuzu (Irish Terrier), Atë, and Calliope (both Australian Kelpie/Pit Bull mixes).
Related Articles: Game of Thrones: A Telltale Series
Share
Tweet
Share
Submit