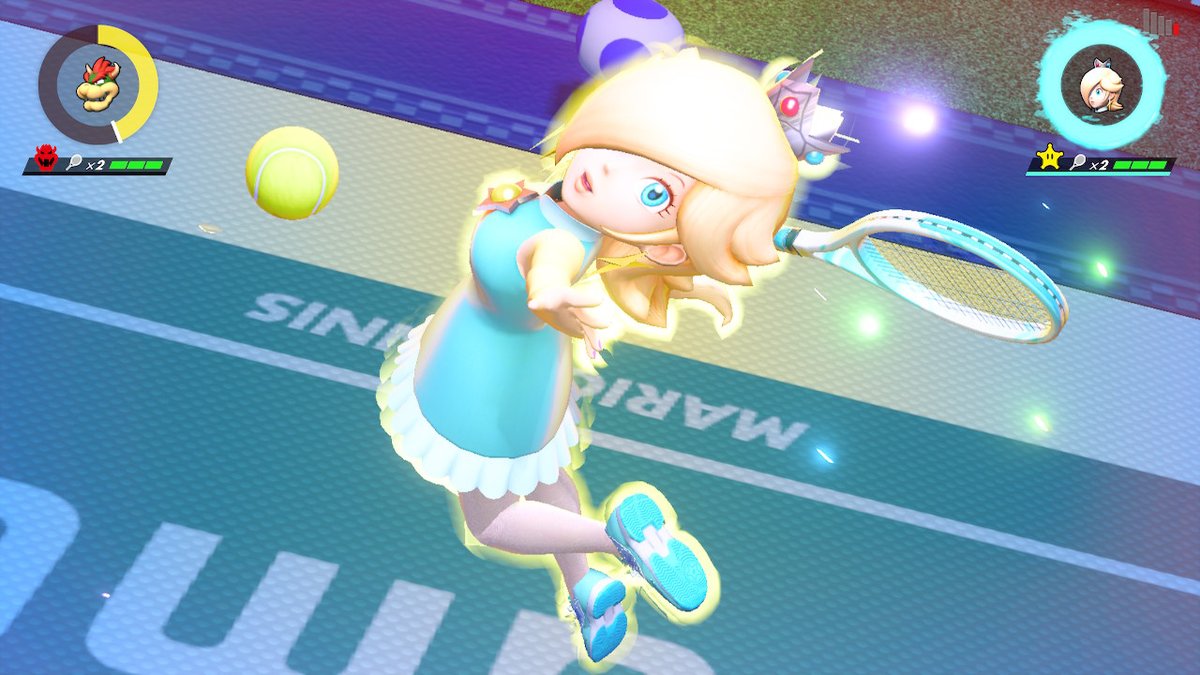 A mere six months after its announcement during the January Mini-Direct, Nintendo is gearing up to release Mario Tennis Aces in just a few short weeks. In true Nintendo fashion, the publisher was not content with keeping fans excited by merely releasing trailers and holding limited preview events for the press. No, much like with the ARMS Testpunch and the Splatoon Testfires before that, Nintendo gave the community a taste of heated tennis action last weekend with an online tournament. While the tournament only allowed for online singles matches and offline-CPU practice, that only represents a sliver of the full suite of Mario Tennis Aces features. When the full game is released the end of the month, in addition to both local and online multiplayer, Mario Tennis Aces will feature a full single-player story. Titled Adventure Mode, this quest is shaping up quite nicely with varied tennis gameplay, a host of different locations, and a bonkers story that only Mario and friends could pull off. Camelot is really going above and beyond with Aces. The attention to detail and depth of content is exciting the Nintendo community in a way that recent Mario sports games simply haven’t been able to do. But, how does it play? That is the question which the Aces demo sought to answer.

While the Online Tournament was set up fairly simply, it had a rather surprising hook to keep players online for hours at a time: unlockable characters. Playing matches online awarded points with a significantly higher number of points going to the winner. The more matches you win in a row, the more points you rake in, at the cost of encountering more and more difficult opponents. In order to get those characters, you had to bring your A game to the court. This meant smartly utilizing Mario Tennis Aces’ biggest addition: the energy system. Say what you will about The Legend of Zelda: Skyward Sword, but it is undeniable that it introduced modern Nintendo’s new favorite gimmick: green meters that do something. But, whereas Link’s stamina meter dictates his strength and depletes with strenuous activity, Mario and friends can hit cross court forehands until the end of time.

Instead, Mario Tennis Aces’ meter builds with each shot, and a wide array of special moves can be activated thanks to the energy accrued from each point. There are four new techniques: the Zone Shot, the Special Shot, Zone Speed, and the Trick Shot. All of these techniques can award the upper hand in a point, but using them will result in a large hit to the energy meter. As such, picking the right moment to use each shot is essential to success in Mario Tennis Aces. The former three moves play off of each other, and offer the highest risk-vs-reward scenarios. When Zone Shot is activated in a designated area, your character leaps into the air, and the camera enters first person allowing for pin-point ball placement. The Special Shot is very similar, however, it is much more powerful and can be activated anywhere on the court, regardless of where the ball is. This is balanced out by the fact that the Special Shot can only be used when the energy gauge is full, and it uses up a minimum of 25%. Still, these two techniques might seem overpowered until Zone Speed is considered. This technique allows you to harness your inner Quicksilver and slow down time to a crawl. Zone Speed is the best defense against a Zone or Special shot, although it does drain the energy gauge at a rather fast rate. If the technique is used correctly, the ball can be deflected back. Emphasis on deflected: If you’re lucky, you’ll get the ball back. If not, your racket will end up breaking. Lose too many rackets, and it’s game over, even if you’re up forty-love.

However, there is still the Trick Shot to discuss, and it is emblematic of my issue with Mario Tennis Aces after playing many, many matches during this beta. With a flick of the right stick, your character catapults themself in the direction of the ball. If they are close enough to the ball, and the radius is rather generous, they’ll automatically return the ball. This simply feels like a crutch. I play tennis in real life, and so I appreciate the strategy of the game. In fact, I felt as though I was strategically superior in many of my matches, simply because of my real world experience. Often, I could bait an opponent to net, and throw a lob over their head, or more frequently, get up to net myself. I could throw volley after volley at my opponent to opposite sides of the court, but by using Trick Shots they could bat them right back at me. Even the Zone Shot, Special Shot, and Zone Speed, which I feel are much more balanced, detract from the tried and true strategy of the game. Luckily for purists like myself, the energy mechanic can be turned off, so I don’t see these added mechanics as that big of an issue with Aces. However, this feature was not available in the demo, so I cannot speak directly to how the game plays without the energy gauge. Along the lines of emulating the real tennis experience, one feature that I was unable to try during the demo was Swing Mode: motion controls that seem to emulate nearly 1:1 actual tennis strokes. While I tend to prefer traditional controls, if these work well, there is no doubt in my mind that this is the way I’ll play. Mario Tennis Aces has already gotten me up on my feet jumping and swearing my way to victory, so I might as well add motion controls into the fray.

Questionable gimmicks aside, it is undeniable that I was having an absolute blast playing Mario Tennis Aces. The fun factor here is just through the roof. I have not been this engaged by a Switch game in quite a while, and I’ve already pre-ordered my copy. The movement and strokes feel great, and cinching the win with a well placed drop-shot or killer forehand is a rewarding experience. However, the real icing on the cake is all the little details that Camelot added to this title in order to further immerse the player. From the HD rumble-simulated heartbeat on important points, to the wildly expressive characters, it’s clear that a lot of love and care went into making this game. I’ve felt that New Super Mario Bros homogenized the Mario franchise, and for a while it did. Post-Super Mario Galaxy, everything Mario (with key exceptions, such as Mario Kart 8) felt very generic. The Switch started to change that reputation with Super Mario Odyssey, which is one of the most creative and zany games I’ve played in quite some time. I can happily report that Mario Tennis Aces is continuing that trend. What really sealed the deal for me was watching Waluigi moonwalk in slow-motion across the court with a rose in his mouth. Mario Tennis Aces isn’t afraid to have fun, and I’m certainly not afraid to have fun with it. June 22nd can’t come soon enough!

Keep an eye out here at Gaming Trend for even more Mario Tennis Aces coverage and everything else this industry has to offer.

Abram is an aspiring games journalist with a soft-spot for titles published by a particular company that starts with N, and ends with -intendo. When he's not playing, or writing about, video games, Abram is most likely ranting to no one in particular about various films he's seen, or grabbing the sketchpad to do a bit of drawing.
Related Articles: Mario Tennis Aces
Share
Tweet
Share
Submit