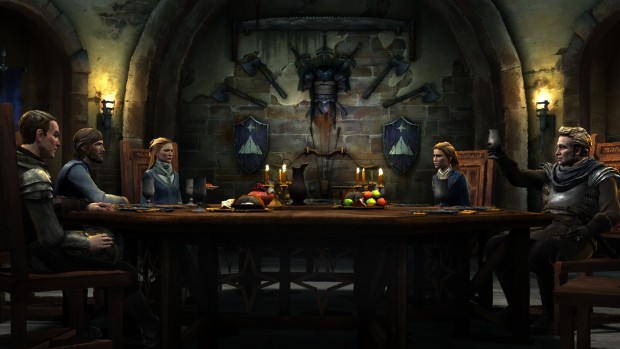 If there’s one thing to say about Game of Throne’s fourth episode “Sons of Winter,” it’s that it has shaken off much of what has held the episodic series back: Game of Thrones itself.

Previous episodes of TellTale’s adaptation have been full of cameos from established Game of Thrones characters, references to major events in the series, and a sense that the studio was so forced to color between the set lines that it robbed much of its original characters and settings of their own identity. Player characters that have never been seen outside of this game often came off stiff and lacking their own personal motivations, making the collective that is House Forrester come off more like a hivemind instead of a group of intriguing individuals.

In subtle moments between dialogue options, TellTale has sprinkled in glimpses of character that have previously been absent. For example, Mira Forrester no longer feels wooden and meek, now using her experience dealing with the nobles of King’s Landing to manipulate things in her family’s favor in a way that is conniving and intimidating. Asher Forrester doesn’t come off quite as much like a brute due to softer moments, like comforting a friend in an incredibly distressed mental state.

Instances like these are made possible by “Sons of Winter’s” abandoning of the constant obligatory references to the source material. With the exception of the excellent Daenerys Targaryen, most of the characters from the television series are only seen or mentioned in passing, and even Daenerys’ appearance is brief and simply nudges the story in the right direction.

This allows TellTale to weave more of its own narrative, and bring a sense of life to the story it’s telling that has been absent in the first half of the series.

This focus on its original characters comes at a great time in Game of Thrones, as “Sons of Winter” shows the conflict between House Forrester and the Whitehills escalating at a remarkably fast pace, as it is now less bogged down with overlapping stories and fan service.

True to the source material, each conversation you’ll partake in carries a sense of weight that is unparalleled compared to other recent TellTale series, as one wrong response can be the difference between acquiring vital information and a character’s demise. Nothing within Game of Thrones comes without a cost, whether it’s making an undesirable deal or betraying a friend.

Still yet to come are consequences that feel less isolated and contained to any one character’s story and setting. Hopefully as TellTale gets closer to the finale, Game of Thrones will be more upfront about how each character’s actions will affect the stories of another, rather than merely implying that a failure on one character’s part will make something more difficult, if not impossible for another.

Now that TellTale is safely outside the borders of Game of Thrones, the game’s consequences feel all the more tangible, and the anxiety that comes with that continues to benefit from TellTale’s continued use of brief timed response windows.

In finishing “Sons of Winter,” I felt like I finally understood why TellTale was opting to make Game of Thrones one episode longer than its other episodic games. It wasn’t that it necessarily had a longer story to tell, but it was also carrying with it a the baggage of a story that’s already been told. That’s something that, despite being in a previously-established universe, Tales from the Borderlands and The Wolf Among Us didn’t deal with due to the fact that they weren’t overlapping with something that’s already been written.

More than halfway through, Game of Thrones finally feels like its own story, not one trapped within the confines of another, and that’s what makes “Sons of Winter” the best episode in the series yet.