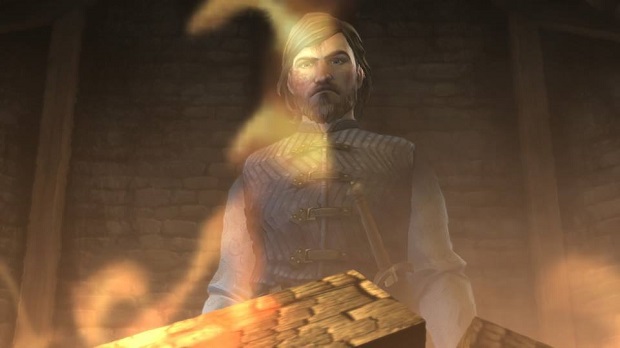 [The following is part five of our ongoing impressions of Game of Thrones. Check out our thoughts on episode four, “Sons of Winter,” here]

For as much as Game of Throne’s “A Nest of Vipers” falls into TellTale’s typical penultimate episode moments of fluff and filler, the fifth episode of the story of House Forrester manages to overshadow the more meaningless and hollow moments of its few hours with segments that stand among the best the series, and even TellTale, has yet to offer.

“A Nest of Vipers” continues the series’ upward momentum by once again forgoing a focus on the Game of Thrones source material in favor of developing its own characters first, specifically the eldest sons: Rodrik and Asher Forrester.

As Game of Thrones has gone on, Rodrik has been constantly called upon as a leader due to his status as Lord of House Forrester, which has led to him making most of the dire decisions any of the playable characters have had to make. However, throughout “A Nest of Vipers,” Rodrik’s ability to be a strong leader is constantly called into question by others, and even by himself as the body count in the name of House Forrester continues to rise under his leadership.

Conversely, Asher has to step into a leadership role of his own, despite being considered the rogue grunt of the Forrester family. Seeing a character who was once exiled from his family’s home have to lead men and women into battle with a different means of motivation, one charged by the love of the fight instead of loyalty to House Forrester, really sells what makes both brothers so different. This duality flows through the veins of “A Nest of Vipers,” and is essentially the theme of the episode, even being called out specifically by certain characters.

This all culminates into what is perhaps the most draining choice that players have had to make in Game of Thrones, which leads into one of the most powerful sequences that TellTale has produced in recent memory.

Unfortunately, Rodrik and Asher take up so much spotlight in this episode that the other two playable characters in “A Nest of Vipers,” Mira Forrester and Gared Tuttle, appear in what are almost glorified cameos.

Between the two, Mira fares far better. As she begins to confront the fact that her time at King’s Landing may be coming to an end, Mira is again spun into the continuing conflict between Tyrion and Cersei Lannister after the Purple Wedding. As interesting as these sections will likely be to fans of Game of Thrones, their overall impact on Mira’s story is yet to be seen, but they’re also so brief that they feel like intermissions between Asher and Rodrik’s superior moments.

However, between the two, Gared could have been removed from the episode altogether. House Forrester’s squire’s journey beyond The Wall makes almost no progress in “A Nest of Vipers,” and the action sequences come off more like fanservice aimed at Game of Thrones fans than meaningful, making Gared’s presence in this episode feel more obligatory than necessary.

Looking at the first half of Game of Thrones and comparing it to what it’s become in the past two episodes, it’s hard to deny that, despite a slow start, the series has truly come into its own. While one half of “A Nest of Vipers” stumbles, the other offers the series strongest character moments and most difficult choices. The Forresters have grown from meager self-insert characters meant to walk alongside characters native to Game of Thrones proper to excellent characters in their own right.

The final episode called “The Ice Dragon” will bring closure to this story, and “A Nest of Vipers” has me properly invested and ready to see how it all ends.