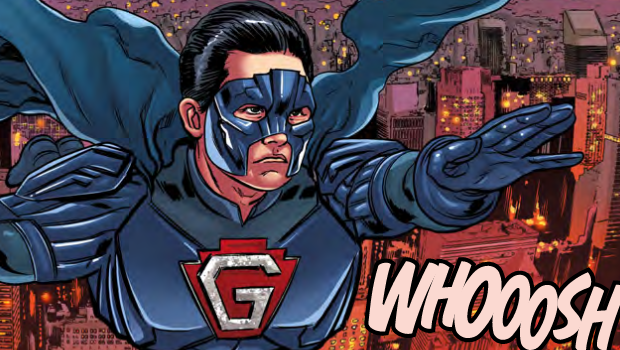 2016’s Doctor Who Christmas special, “The Return of Doctor Mysterio,” introduced a boy named Grant who gained Superman’s most well known powers (flight, super strength, bulletproof skin, x-ray vision) when he mistook a powerful alien gemstone—one of only four in the universe—for a large pill and swallowed it. Later, as a grown man using the alias “the Ghost,” Grant helped the Doctor thwart an alien invasion. This comic-inspired episode was moderately well received; superhero fans liked it more, and those who don’t enjoy superhero stories were less interested.

“Doctor Who: Ghost Stories” continues Grant’s story eight years later. He’s now married to a reporter named Lucy Fletcher and helping raise her daughter from a previous marriage. The narration is given from Lucy’s point of view, which gives her a bit of depth and helps to make her more than just a stock superhero love interest. She talks about what it’s like to have a family where the father figure is a superhero, and how that affects her. Confusingly, the “Previously…” section suggests that Grant has put away his superhero costume, yet the very next page shows that he still wears it underneath his normal clothing and habitually flies away to fight crime.

Apparently, superheroes don’t get much time off for Christmas.

The afternoon after their eighth Christmas together as a family, they see a bank robbery on the news, and “the Ghost” rushes to stop it. When he arrives, so does the Doctor’s TARDIS. The Twelfth Doctor begins talking to Grant, but the superhero is distracted by the robbers. The Twelfth Doctor dismisses them as “not important,” but Grant can’t ignore them. This exchange was perfectly in character for both of them and made me chuckle. In order to stop them and get Grant to listen, the Doctor uses his sonic screwdriver to make the bank’s revolving door spin ludicrously fast, causing the escaping criminals to lose their guns, their loot, and their lunches. Police handle things from there. Finally able to get Grant’s undivided attention, the Doctor asks for his help. With some reluctance, Grant goes with the Doctor, insisting that they take his family along as well. To the Doctor’s disappointment (and my amusement), Lucy’s daughter Jennifer is not surprised by the TARDIS being bigger on the inside.

So off they go in search of the other three alien gemstones like the one that gave Grant his powers; the TARDIS uses the one inside Grant to track down the nearest one. I love the fact that this story arc is picking up this plot thread that “The Return of Doctor Mysterio” left hanging. When the TARDIS lands, they step out into a dystopian future version of New York. A gemstone-powered supervillain called “the Smoke” has taken over, and now it’s up to “the Ghost” to stop him.

That’s superhero speak for “Come at me, bro!”

Overall, it’s a solid beginning to a story arc that makes perfect sense for the comic format. The characterization was consistent with what was shown on TV, as it should be. The art was gorgeous and detailed; actions are shown clearly, and facial expressions add feeling to the dialogue. My only criticism of the art is that the color of the Doctor’s hair was a few shades too light—it should be gray, not white. I’m looking forward to seeing more of “the Ghost” in future issues!

Kyle is an unashamed longtime Nintendo fanboy. Some of his earliest and fondest memories are of playing Super Mario Bros. 3 on the NES with his grandmother. His favorite series are Fire Emblem and Metroid. Outside of gaming, Kyle is also a serious Whovian, favoring the Seventh Doctor and Ace as his preferred Doctor and companion. He also loves superhero movies, power metal music, and basically anything in the space fantasy genre. Avatar by Smashley (@SmashleyDraws on Twitter).
Related Articles: Beyond the Page, Doctor Who: Ghost Stories
Share
Tweet
Share
Submit