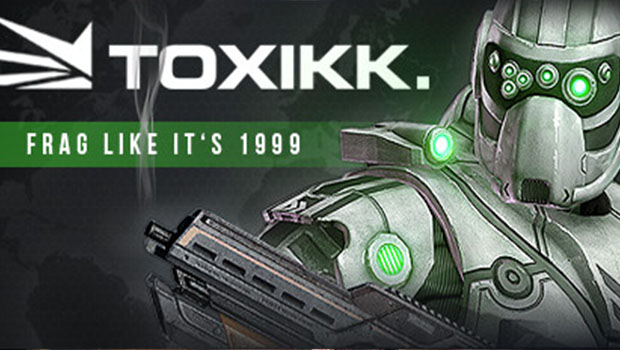 I remember playing in LAN parties fondly in my youth, from Unreal Tournament to Quake Arena but I thought those days were in the past. That was, until I found TOXIKK on Steam Early Access. TOXIKK is a no-holds-barred, straight-up arena style shooter. There are no loadouts or perks, it goes back to competitive FPS’s roots and firmly stays there.

If you are looking for a revolutionary game with new ideas, then look as far away from TOXIKK as possible, that’s not the point, but rather it plans on bringing up a genre that has been lost. You don’t choose a loadout or guns, you run as fast as you can to grab guns at spawn points, It is frantic, pure chaos, and it brings back a massive surge of nostalgia. The guns are all beautiful and overly powerful. The pace is blazing fast and I have been enjoying every minute of it.

One drawback of being in the beginning stages of development is it only has two maps currently, though more are planned on being released. But with only two locations they are already stunning and diverse. Foundation, in which the modes Bloodlust and Squad Assault take place, is a tight-knit urban environment set in the slums of Hong Kong. Foundation is dark and dreary except for the bright neon signs, which  running at such a fast pace makes everything a beautiful neon blur. On the opposite end you have Twin Peaks, in which Cell Capture takes place, is a gorgeous, open, mountaintop based map, with large areas and building at each end with cater to those who prefer close combat.

What they have so far in sound is also something to look at. While I wouldn’t go as far as to say the sound is amazing, it succeeds where it needs to. The guns all have unique sounds, but they also fit the type of weapon very well. The sound of a futuristic shotgun or the starting handgun feel like they are from another timeline, but still grounded in our world. The other weapons, such as the Stingray and Dragoneer, sound lighter and more like something out of a sci-fi movie.

TOXIKK shines the most through it’s gameplay. It has been years since I have played a twitch shooter with this fast of pace. It is so chaotic there are times I do not even know what is happening, in a good way. The speed of the weapons mixed with the character’s’ movement speed allows you to zoom around the map, flinging bullets at anything that moves. This is not a game for campers or slower playstyles, the only viable option is based on speed, accuracy, and reflexes. The gameplay shines most in Bloodlust and Squad Assault, due to the only goal being to frag the enemies, while running full speed to keep yourself alive. Cell Capture on the other hand is a slower paced mode due to its’ impressive size. Although with less players the map can be too big and therefore it is a lot of walking or driving and less time in the action.

TOXIKK succeeds in what it sets out to due. It is one of the only recent shooters that are pure, old school, arena-based goodness, and it is the best of those. I can’t give a full recommendation to pick it up until more content is added, which they are working hard on, but what they have could shape up to revive an almost dead genre of shooters. TOXIKK is a old school players dream that drips nostalgia with a beautiful facelift. Once more content it could transform into something that many people have been waiting for.

Growing up in a small Colorado town, Bryan has always had plenty of time to play games. PC is his first choice of tech followed by the PS4. Graduating at 16 Bryan knew he wanted to be a writer and wanted to combine his love of games into that and found Gaming Trend in 2012 where he quickly became a member and started writing for them as soon as he could. He is still at Gaming Trend, but now has 2 kids, a puppy, and a lot less time to play the games he loves, but he always finds a way to get back into gaming.
Related Articles: TOXIKK
Share
Tweet
Share
Submit