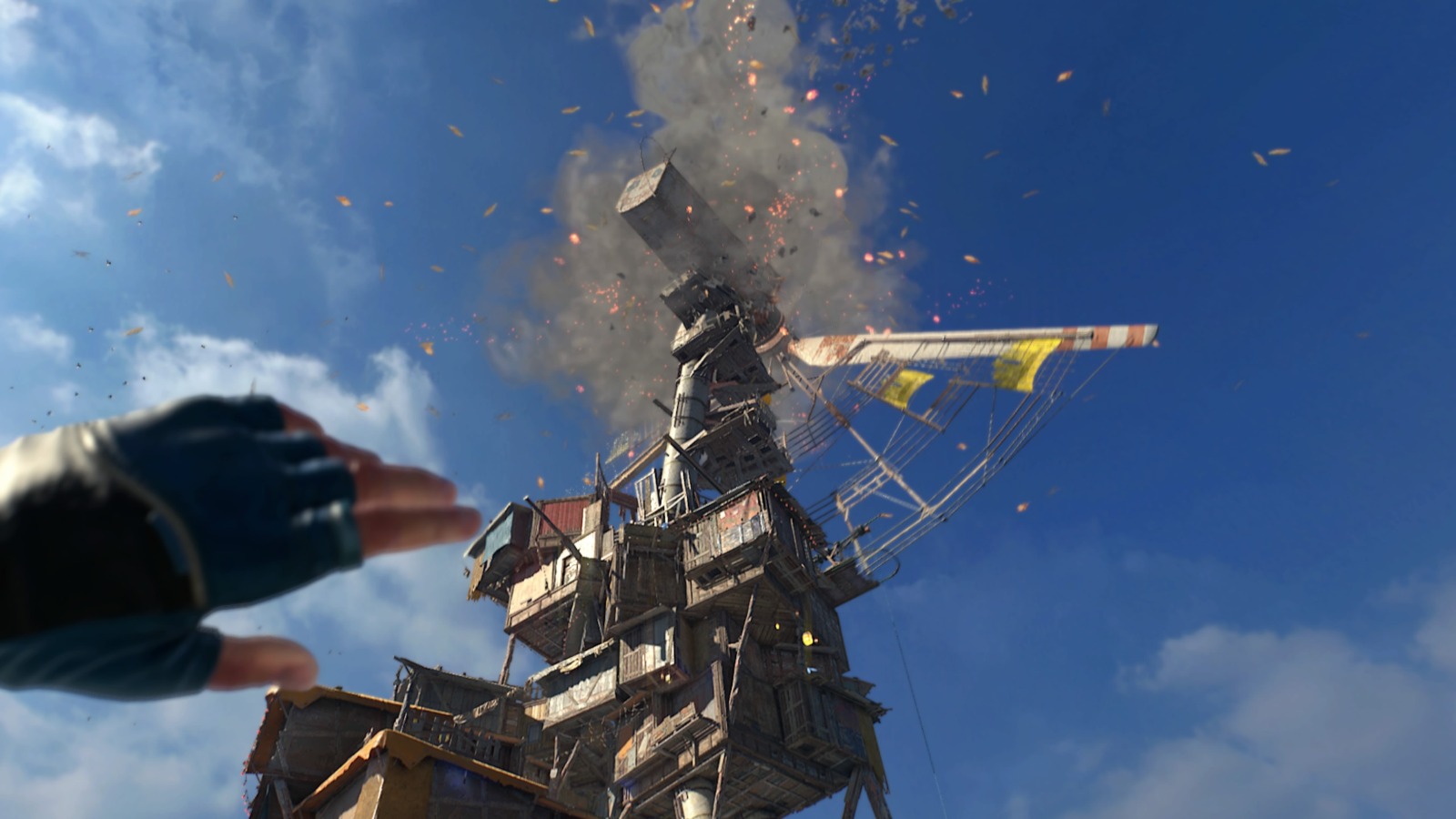 The world of Dying Light 2 can be intimidating on your own. There’s zombies around every corner who will often chase you through the city, and even worse other humans desperate to kill you for just a little loot. The best thing to bring, then, isn’t a flashlight or a big weapon; it’s a friend! We enjoyed Dying Light 2 Stay Human in single player, but now four editors are taking to the streets of Villedor together to parkour, fight zombies, and try to Stay Human together. 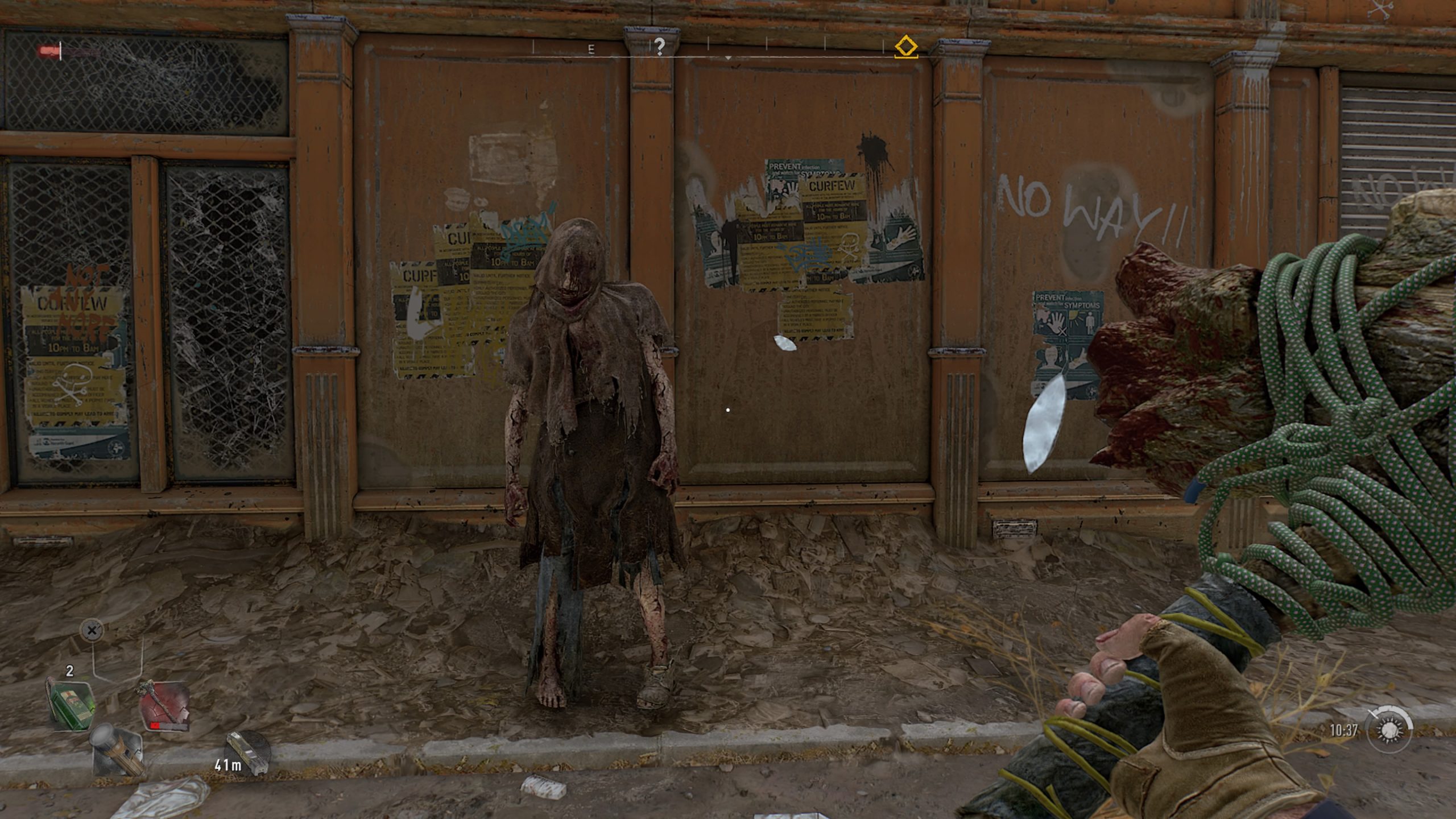 I found DL2 pretty enjoyable on my own, a lot smoother than the original on switch with platforming and combat flowing together nicely and a decently interesting story (at least with what I’ve seen in the first few hours). Being able to add up to three friends to this single player focused experience was a weird but fascinating experience, and my preferred way to play at the moment.

Co-op essentially breaks the game in the best way. In combat, you can easily split up groups of enemies or simply take turns hitting them so they can’t get up, and when running away from hordes you can swap off being chased to get some great bonuses continually. If one of your group is way further in the story, you can also drop some higher level gear for them to equip. While it’s a bit disappointing progress only counts for the host and voting on suggestions in dialogue only amounts to a suggestion, it’s a ton of fun to dominate the city together when alone you might be more cautious. While it’s broken in a very enjoyable way, there are a few bugs that should be ironed out. For example, in a boss encounter as the host I was able to defeat and loot the boss, for my partner the boss didn’t die. Instead, they became invincible and we had to run away. It’s not game breaking, but definitely weird. There are also some connection issues that I can’t figure out, sometimes voice chat won’t work for one person or they might not be able to join a game entirely. It’s a little rough around the edges, but so, so worth it if you can play the game with a friend or three.

Before jumping into Dying Light 2 I had not previously played the series and wasn’t sure what to expect. Thankfully, the beginning missions do a great job of bringing you up to speed with the basics before letting you lose on a zombie infested world. I was pleasantly surprised by the entire experience and quickly became a fan. That said, co-op was the reason I hopped into the game in the first place and that experience – while a bit buggy – was a blast.

Myself and another editor were able to take turns in each other’s games, hopping in and out without any connection issues. Unfortunately, the same can’t be said about another one of our editors who had a slew of connection issues and never got to actually play for more than a few minutes with us. When they were connected their mic would not work and they frequently got booted. We never were able to come together for a full play session.

I first hopped into David’s game, who was at a much higher level than me, and I quickly got pounded by enemies. To prevent me further getting destroyed, David was able to drop multiple high level gear pieces and weapons for me to equip. This was a welcome addition to co-op, as I always appreciate being able to swap gear with other players. As he mentioned above, co-op nearly breaks the game by allowing you to gang up on enemies. It’s a nice deviation from the tension of single player – sometimes it’s just fun to let loose without much fear of failure.

I did experience some weird issues during our playthroughs, although none were gamebreaking. The worst glitch, which was mentioned above, was a boss encounter which went fine up until a cut scene, after which the boss was dead on David’s end but still alive and invincible on my end. Eventually I had to run away from the encounter, forfeiting any gear or experience I may have otherwise received from the fight. I did not venture back to the area of the fight, so I am unsure if running away fixed the issue or if the boss would still be there waiting for me.

After completing a mission on David’s end, he then hopped into my game to complete a quest. We encountered no bugs this time, but it is a bit frustrating that when playing with another player, that player cannot collect the objects needed to complete a mission, It has to be the host. This isn’t game breaking in any way, but when working as a team I do wish that anything collected would count toward progression.

Minor gripes aside, I still loved my time both with the single player campaign and with co-op. Both experiences vary widely, with single player providing a more tense atmosphere and requiring a strategic approach to completing missions, while co-op allows you to approach missions with reckless abandon and give you a sense of power not found in single player. Both experiences have their merits and are a testament to the quality of the game design. 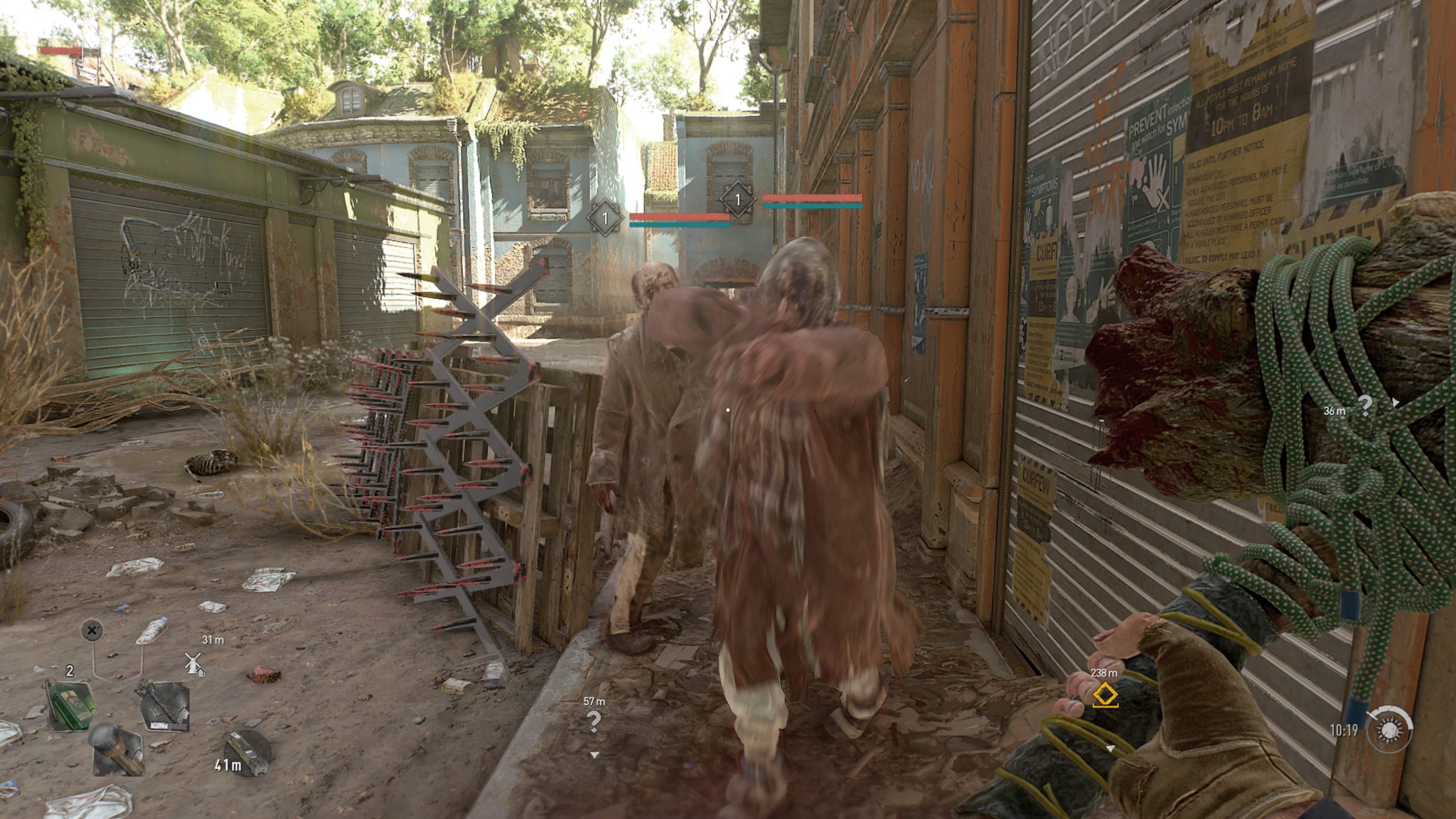 Like Richard, Dying Light 2 was my first experience with the series, and I was really interested to learn first hand what all of the hype was about. Unfortunately, my first impressions weren’t that great; I joined up with two other editors and was playing for just a few minutes before I got disconnected, which was a shame because those guys sounded like they were having a blast. I tried for a good forty-five minutes to reconnect with them but I wasn’t able to.

Instead, the vast majority of my co-op experience has been with randoms, and while I can certainly see the potential there, again, my experience was a bit of a mixed bag. First off, the good. I was really impressed with how easy and unobtrusive it was to join someone else’s game. It’s as simple as opening up the menu and automatically joining another session through the quick game option, or selecting a specific lobby from the menu. I actually ended up using the quick game tool mostly, as it seemed as though it tried to pair me with players who were at a similar place in the story to me (although I cannot confirm this).

I played a few sessions with different randoms, and one might expect when teaming up with random players, the gameplay experience wasn’t always smooth. For example, one person I joined sounded like he was putting a can through a paper shredder and had accidentally left his mic beside it. In another session, the host went AFK just as we were about to fulfill the mission objective, and as only the host can complete objectives, we couldn’t move on. That being said, I did have one really enjoyable session where we didn’t worry too much about questing, instead opting to explore and scavenge the open world together. While quest progress doesn’t carry back to your save, the goodies you collect do, so that session was well worth my time.

Ultimately, although I was only able to test co-op with friends briefly, I think if you’re getting the game solely for co-op, having buddies along for the ride will be infinitely better than teaming up with randoms. Communication is better, and the narrative focus of the game is much better suited to those who can set aside time each week to play with each other and experience the full game together.

Although I have had issues with the co-op, my single player experience has been a blast with no issue on the PS5 version whatsoever. The world is both apocalyptic and beautiful at the same time, and the map is complex and dense, with a ton packed into it. The parkour system is incredible, and after playing this it will make Assassin’s Creed hard to go back to. It just feels amazing to traverse across Villedor, especially when you’ve invested some points into the parkour tree. I’m not totally sold on combat yet, it isn’t bad by any means, but it just feels a bit one dimensional at the moment. I’m sure this will improve once I’ve invested more points there. It does feel wonderfully weighty, though. 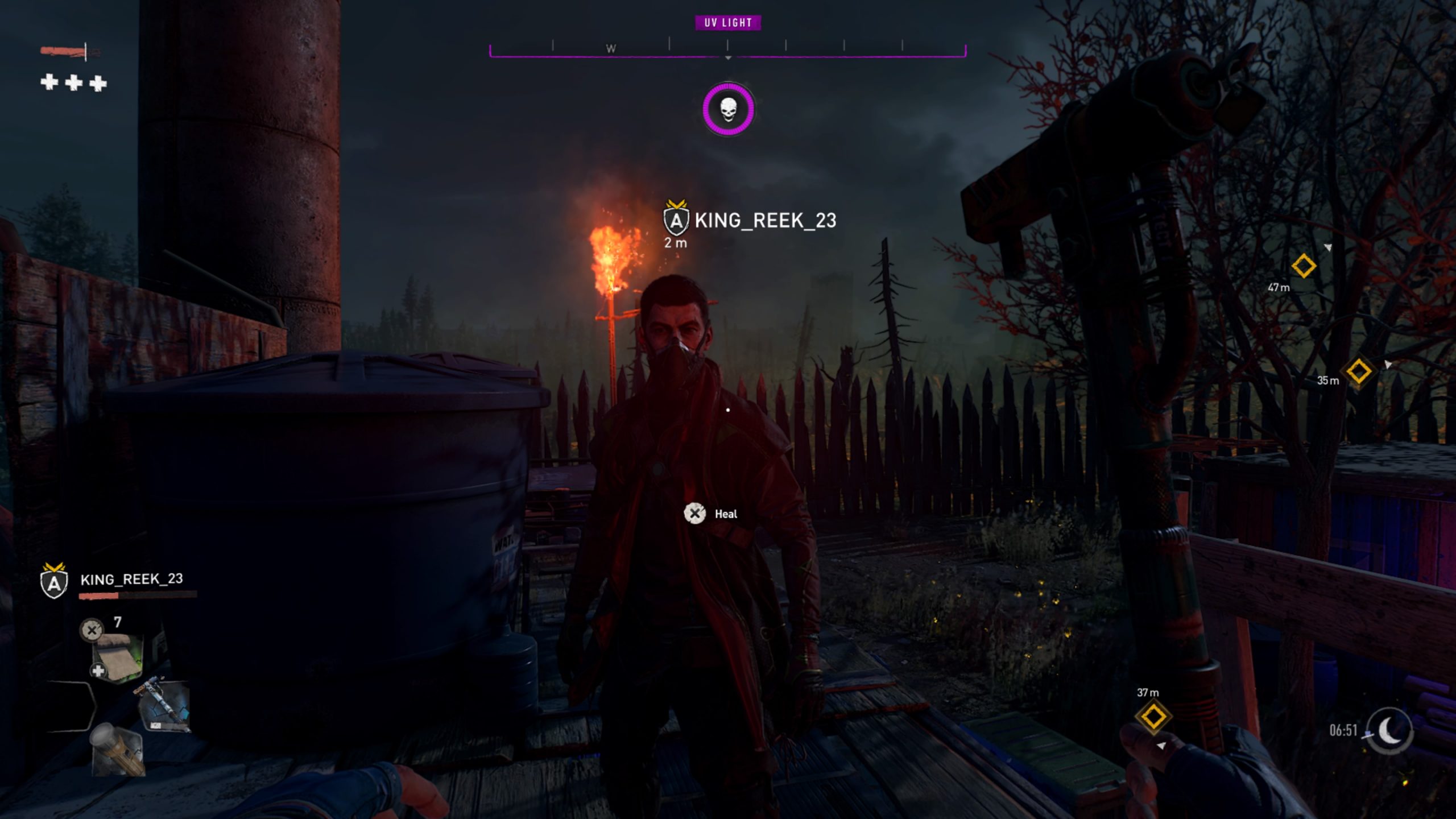 Sometimes the silence of the night can be the scariest thing one might encounter in life. While I’ve played many games with a night/day cycle that changes the game as you play it, few are as enthralling as Dying Light 2 seems to be. What started out as a fun adventure type of game in a vast zombie type of world turns into one of probably my favorite takes on a zombie type genre of games. This pedigree for a great game, gets better with the addition of co-op. During my time playing co-op with a few random players, I wound up getting some much needed help clearing rooms at times, and that help took us from stealth and methodical gameplay, to lets all just bash the zombies much I imagine real life might be if you were fighting off zombies. Solo gameplay is fun, full of suspense, and never without a dull moment. Co-op presents an opportunity to throw caution to the wind and fight back about normal game conventions and effectively, “go ham”. With a couple of minor hiccups as far as the menu feeling a little slow/clunky on PS4 between both solo and co-op, Dying Light 2 shines bright and gives me a zombie experience I have been craving since the first Left for Dead hit my shelf.

So there you have it. How has your time with Dying Light 2’s co-op been so far? We’d love to hear your thoughts, and for everything Dying Light 2, stay right here with Gaming Trend.