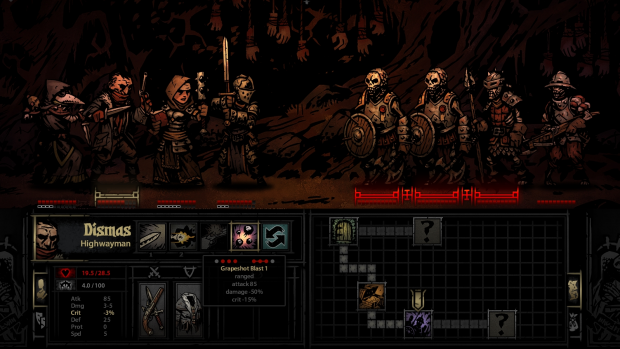 I’ve been in the ruins for all of two hours, and already the situation is looking grim. You’d think the massive carnivorous pig-man and his projectile-vomiting piglet allies would be the worst of my problems, but no – what’s really going to do my party in are the party members themselves. My crusader’s got blood pouring out of him and he’s at death’s door, but he’s lost his mind and now finds that kind of thing to be a turnon – he keeps telling my vestal to keep those healing spells off him because he likes the pain. Not that the vestal’s doing much better; one splash of vomit in the face too many has made her into a paranoic, and frankly she already had a bit of claustrophia before stepping foot in this place. Meanwhile my highwayman and grave robber are hopeless, so certain we’re doomed that it’s hard to motivate them to be useful. All I can do is try to butcher the pigs and haul ass back to town so they can sate their gambling addictions and penchants for self-flagellation long enough to relax a little.

Welcome to the world of Darkest Dungeon.

Currently in Steam Early Access, Darkest Dungeon offers itself up as a ‘challenging gothic roguelike turn-based RPG about the psychological stresses of adventuring’, and it certainly hits each and every one of those notes dead-on. Challenging? It certainly is that, since the game is built around permadeath and auto-saving mechanics, and combines itself with a fairly steep amount of difficulty right from the  get-go. Gothic? One look at the art shows the game has that going on in spades – the whole thing has a ‘Mike Mignola’s Hellboy’ artistic style to it, loaded up with grim shadows in a world and sinister backdrops. All of this is good and welcome – I love new roguelikes and beautiful art as much as anyone can – but it’s the last bit, the part about the psychological stresses of adventuring, that sticks out. Even in Lovecraft-themed games, that sort of thing doesn’t tend to get top billing. But it’s a central offering in Darkest Dungeon, and it’s the part that really warrants the most talking-about.

We come in peace! Oh who am I kidding, when has that ever worked.

When you think about it, the psychological stress of actually skulking about in a typical dungeon-dive – to say nothing of the “insanity is a central theme here” Lovecraft universe – must actually be intense. Even with seasoned adventurers, you’re dealing with a scenario where you’re walking around in the near-perpetual dark, fighting off large dangerous things that would like to murder you, and usually attempt it in the most disgusting ways (see the aforementioned projectile vomiting.) Even if a person is of perfect mental health before walking into a situation like that, it’s natural to imagine the stress would get to them – and that’s before remembering that most people tend /not/ to be the pictures of psychological cleanliness. What are they going to be like after the carnivorous brain-eating slug-beast splashes reproductive fluid-acid onto their chestplate? Is that the sort of thing they can just walk off?

So right away the insanity makes sense, oddly enough. It doesn’t take much convincing to ‘sell’ it as a factor in an RPG. But Darkest Dungeon not only includes psychological turmoil, but implements it in a fun way. It’s not as simple as ‘Well, you’re insane now. -2 to your dodge rolls.’ Stress can accumulate during the course of a dungeon-dive, represented by a segmented black bar. As little annoyances take place during the game – people say demoralizing things, or a skeleton cleaves you with a broadaxe – this bar goes up. Sure, stress can be relieved in various ways, but most of the time you can count on more and more stress piling up until suddenly… your character just cracks. And you get to see what happens to them when they’re really and truly under pressure. Will they turn masochistic and start cutting themselves (naturally, lowering their HP)? Will they become paranoiacs and refuse the aid of their allies? Will they snap in a -good- way and suddenly feel a rush of confidence that improves everyone’s mood? Darkest Dungeon keeps that secret until the chips are down and the stress hits a peak.

But that’s just the insanity caused by intensely stressful situations. What about your average, run-of-the-mill phobias and mental quirks? Well, those are well-represented as well. Characters can have these the moment they show up for recruitment, or can develop them in the course of their adventures. There’s a good variety here – gambling addictions, claustrophobia, an obsession with skeletons, a fear of the dark… some are positive, some are negative. For a price and a bit of time, treatment is available for the nastier traits, courtesy of the local sanitarium. Grim looking place, but they apparently can make good on their promises for a cure in this game. In fact, accumulating positive mental quirks while pruning the negative ones seems to function as one of the key methods of character advancement in Darkest Dungeon, on top of the usual improvement of level, equipment and abilities.

With a taste of the psychological aspects of Darkest Dungeon offered up, let me add – this game has a lot going for it besides all that. Really, this is a fun, unique dungeon crawler with a decent variety of classes, a permadeath system that keeps you on your toes, and a well-implemented turn-based combat mechanism. This is a game where you’ll crawl through dungeons, trying your best to stay alive just long enough to finish the quest you’re on or at least gather enough loot to make the whole dive a net-positive experience – tried and true, and done with a lot of character this time around. On top of that is the character management aspect, since the necessity to give your characters some time to shed their psychological scars is key, requiring you to maintain a fairly large and diverse stable of adventurers to assemble your 4-man parties with time and again. Along with all of this, you’ll gain loot, invest that loot into a combination of character upgrades, town upgrades, and basically “therapy” for your characters. And, if you’ve got my sense of fun, you’ll have a blast doing it all.

Not bad for a game that’s still in Early Access – I truly had fun with the whole thing, and I’ll continue to have fun with it because it’s a unique, dark-themed joy to play. If Lovecraft, darkness and turn-based roguelike dungeon-diving is your thing, Darkest Dungeon is a title to keep an eye on. Just don’t stare too long. You may well go mad.

Victor Grunn has been a gamer since the days of single-button joysticks and the Atari 800XL. When not lamenting the loss of the Ultima series or setting people on fire in Team Fortress 2, he's an aspiring indie game developer and freelance writer.
Related Articles: Darkest Dungeon
Share
Tweet
Share
Submit