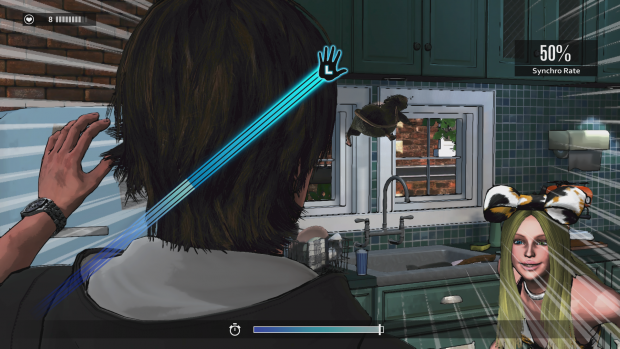 Did you know that airplane tires are filled with nitrogen? Apparently, it’s so the tires don’t burn up when the plane lands.

I didn’t know this until I played D4: Dark Dreams Don’t Die. I actually learned a whole slew of airplane facts. Way more than I thought I would—especially for a game about a guy who travels back in time in order to solve the murder of his dead wife.

Swery, the genius/insane mind that brought us the brilliant/completely stupid horror game Deadly Premonition (depending on who you ask), has struck again. This time, it’s a Kinect-focused murder mystery, but everything is tilted on its edge. David Young is a detective, and he’s looking for the man who killed his wife—a man known only as “D.” David’s also been shot in the head, which somehow gives him the ability to focus on specific mementos he finds and use them to travel back in time. It’s a little bit of film noir here, a dash of David Lynch there, plus a bit of its own crazy concoction.

This scene is actually 10 times weirder than it looks

Crazy how? How about a girl named Amanda, who hangs out in your room and acts like a giant cat kind of crazy. Or a partner who, in between helping you find evidence, eats more than three times his weight in food kind of crazy. Or a fashion designer who is awfully fond of his mannequin kind of crazy. Or… you know what? You need to play it for yourself to see how far this crazy train goes. Just when you think it’s finally gone off the rails, it gets even weirder. As long as you’re ready and strapped in on this trip to Loonyville, you’ll really enjoy the ride.

I did mention that D4 was centered around Kinect. Don’t tune me out just yet, because the game does some really interesting stuff with that expensive little camera. You don’t control David’s movement directly—rather, there are hotspots in each area that you can send him to explore. Each spot has tons of little clues and items to pick up (each one featuring little snippets of information that sprout off if you hold your hand over it). Every action comes with an associated Kinect command: open a cupboard, swipe your hand to the left, lift up a lid, swipe your hand up, that sort of thing.

But each action has a stamina cost associated to it, and you need to be on the lookout for food to refill your stamina gauge. Lose too much stamina, and you’ll pass out and get sent back to present day—though, the penalty for doing so is little more than a slap on the wrist. Still, it keeps the tension high, as you prioritize your exploration to more pertinent details over less important items.

In between these moments of investigation come some absolutely bonkers quick time events. Believe me when I say that you haven’t seen choreography like this before in a video game—period. To succeed, you need to swipe along with various colored lines, pull and grab, and make all sorts of other gestures in order to properly win. Scoring seems kind of arbitrary, but honestly, it doesn’t matter—the joy of simply getting to watch these events play out is enough reward.

If all of this sounds great, but you don’t want to use the Kinect (or simply don’t have one), I’ve got great news—every action has been mapped to the controller, so you won’t need to flail about if you don’t want to. It makes the QTEs less exciting, but the investigations go at a much quicker pace, which is nice.

D4 is definitely rough around the edges, but the “bad” parts of it (the voice acting, animations, and awkward Kinect stuff) almost makes it better. There are some real hammy Boston accents on display here, but it just fits the off-kilter and totally insane vibe of the whole thing. Combined with the jazzy, unpredictable soundtrack, and you seriously won’t be able to predict what’s going to happen next.

Currently, only the Prologue and Chapters 1 and 2 are available for download, but more should be coming shortly. And they better, because Chapter 2 ends on a pretty insane cliffhanger. At $14.99, this bizarre little detective-themed acid trip is totally worth the taking.

Oh, Little Peggy, I will avenge you—but I gotta wait until the next episode comes out to do it. And I can’t wait to find out where this trip takes me.

I've been gaming since my dad made the bad decision of buying me a Nintendo when I was four years old. Every day I'd find myself with my face glued to a TV screen, punching away at buttons, getting furious with Bowser, Dr. Wily, and those freakin' birds in Ninja Gaiden. Since then I have failed to get my parents to play any board game with me, I sold my full copy of Earthbound with box and guide for $300 to some dude in Austria for rent money, and I still believe in Nintendo even after all these years.
Related Articles: D4
Share
Tweet
Share
Submit